The number of low-income people enrolled in Medicaid rose by 3 million to 62.3 million from October through February as more Americans joined the state-federal insurance program through state and federal online insurance marketplaces, according to a report released Friday by the Department of Health and Human Services. 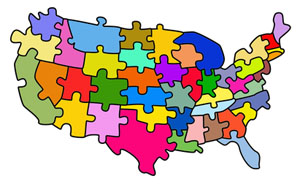 States that expanded Medicaid eligibility under the health law saw an average 8 percent increase in enrollment, with enrollment leaping almost 35 percent in Oregon and almost 34 percent in West Virginia. The health law expanded the program to include all legal residents with incomes under 138 percent of the federal poverty level, or $15,800 for an individual.

States that chose not to expand the program saw an average increase in enrollment of 1.6 percent, the report found. Florida saw the biggest increase — 8.2 percent — as people who were previously eligible but not enrolled signed up. Montana ranked second with a 6.9 percent increase and Idaho was third with a 6.6 percent jump.

Federal officials say the latest numbers, which are compared to a baseline of average enrollment from July through September, 2013, underestimate the program’s growth because not all states reported Medicaid enrollment. In addition, the totals do not include sign-ups for March, when state and federal insurance marketplaces saw a huge influx of people looking for coverage.

While enrollment closed for private coverage under the marketplaces on March 31, there is no deadline for people to apply for Medicaid.

On April 1, Michigan expanded its Medicaid program under the law and New Hampshire will expand starting in July, bringing the total to 26 in addition to the District of Columbia.

The expansion of Medicaid eligibility was expected to add 8 million beneficiaries to Medicaid nationwide in 2014, according to the nonpartisan Congressional Budget Office. That increase was expected despite the refusal of many states to participate after the U.S. Supreme Court made the expansion effectively optional.

Medicaid Enrollment Increased By 3 Million From October To February