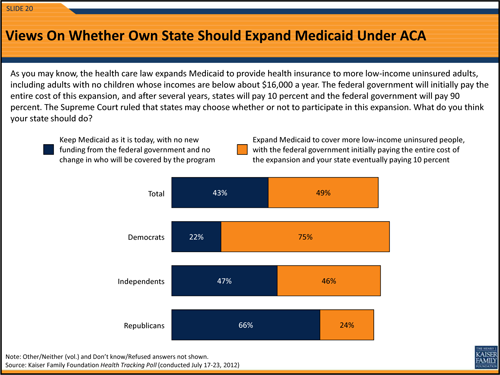 Americans are broadly supportive of the health care law’s expansion of Medicaid to cover millions of uninsured people, according to a new poll.  But they are less enthusiastic about expanding it in their own states after they realize state taxpayers will pick up some of the cost.

Last month the U.S. Supreme Court upheld most of the Affordable Care Act, but allowed states to opt out of the law’s plan to enlarge Medicaid, the state-federal health program for the poor. The law directed states to cover those earning up to 133 percent of the federal poverty level, or about $14,800 for individuals and $25,400 for a family of three, far above the levels currently covered by Medicaid in most states. Officials in several Republican states, including Florida, Louisiana and Texas, have said they don’t want to participate.

Nationally, two out of three people surveyed by the Kaiser Family Foundation said they had a favorable view of expanding Medicaid to cover more low-income uninsured adults. (KHN is an independent program of the foundation.) As has been the case with the law generally, the views reflected partisan viewpoints, with 87 percent of Democrats and 67 percent of independents favoring the expansion. Among Republicans 39 percent favored the expansion as a general concept, more than three times as many as said they like the law.

In general, the pollsters found opinion on the Medicaid expansion was somewhat malleable, based on whether the question emphasized the benefits of the expansion to the poor, or the financial implications.

The poll found that people had an exaggerated sense of the likelihood they would face a penalty in 2014 for not carrying insurance. While the foundation has estimated that one in 10 Americans will end up in the position of choosing between buying insurance and paying a penalty, two in 10 Americans told pollsters they expected to face a penalty. People were much more likely to expect to be penalized if it was described as a tax than if it was described as a fine, the poll found.

“With the ACA, it has been very hard for people to figure out what it means for them and their families, and this is just the latest example of that,” said Mollyann Brodie, the lead pollster.

Overall, the poll found that the public remains split about the law, with slightly more people (44 percent) opposed to it than in favor (38 percent). A slim majority of the public, 54 percent, says they are tired of hearing lawmakers fight over the law and want them to move on to other topics.