With their proposal to turn Medicaid into block grants all but dead, Republicans now are pushing legislation to let states tighten eligibility rules for the health program for the poor and disabled. 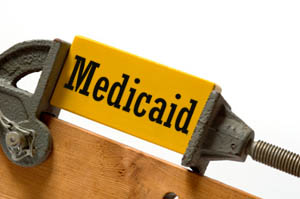 The move, which would affect Medicaid as well as the Children’s Health Insurance Program, would help cash-strapped states save money but could also cause hundreds of thousands of people to lose health coverage.

While Democrats strenuously oppose the proposed Medicaid change, some advocates and physician groups worry that the issue could wind up as a bargaining chip in the partisan wrangling over the debt limit.

The Obama administration says the limit has to be raised by early August, and coming months will be marked by intense negotiations  and horse-trading  between the two parties to reduce the deficit and secure a debt-limit agreement. Republicans have signaled they’ll likely press hard for the Medicaid change during those talks.

“I would be concerned about that for sure,” said Joan Alker, co-executive director of the Center for Children and Families at Georgetown University. “Medicaid is clearly a big part of the negotiations.”

GOP lawmakers are targeting a health-law provision barring states from scaling back Medicaid coverage between now and 2014, when the program expands sharply under the health law.

President Obama and congressional Democrats say eliminating the “maintenance-of-effort” provision would increase the challenge of expanding Medicaid in 2014; an additional 16 million people will qualify, with the federal government picking up most of the cost. If people lose coverage in the meantime, Democrats say, they may come into the program in worse health, driving up costs.

The House Energy and Commerce Health Subcommittee voted along party lines earlier this month to repeal the Medicaid “maintenance of effort” requirement. The legislation is expected to pass both the full Energy and Commerce panel and the GOP-controlled House. A vote on similar standalone legislation in the Democratic-controlled Senate is unlikely but the measure could end up in a debt-limit package.

“We are worried about bunch of things being attached to the debt ceiling bill,” said Nevena Minor, a lobbyist for the American College of Obstetricians and Gynecologists.

The GOP legislation is backed by many state officials. The National Conference of State Legislatures said, “During these tough economic times, states cannot afford to have their hands tied by the federal government.”

To be sure, many Democrats say the odds are against President Barack Obama and congressional Democrats capitulating on an issue of such importance to the liberal base.

“It would be hard to imagine that happening,” said Larry McNeely, health care advocate for the U.S. Public Interest Research Group, a consumer group. “It would be a major defeat for the advocacy community.”

But liberals have at times been disappointed by Obama’s concessions, including last year’s deal to extend the Bush-era tax cuts. They worry that the president will ultimately feel compelled to trade away the “maintenance-of-effort” requirements. The White House declined to comment.

Medicaid covers about 56 million Americans, with states sharing the costs with the federal government. States have been barred from cutting eligibility for the program since 2009 when economic stimulus legislation gave states billions to prop up their Medicaid program on the condition they didn’t tighten eligibility standards. The 2010 health law extended this requirement until 2014.

According to a Congressional Budget Office analysis, the House Republican proposal to repeal the requirement would save $2.1 billion from 2012 through 2021. If it became law, approximately 400,000 people  about two-thirds of whom are children  would lose their Medicaid and Children’s Health Insurance Program coverage in 2013. About 100,000 of those people would enroll in employment-based insurance, according to CBO.

Read the NGA’s letter to Congress 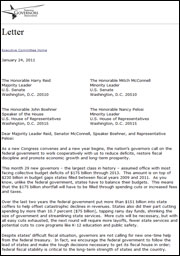 Many governors, who say they are under extreme budgetary pressure due to the sluggish economy, argue that they need more flexibility to manage their budgets and rising Medicaid costs.

The maintenance-of-effort rules “curtail state authority to control their own budgets and fiscal systems and over time discourage investment in state-federal programs,” the National Governors Association wrote to Congress in January.

The maintenance-of-effort requirements have blocked states from imposing or increasing costs on Medicaid recipients. They also have stopped states from making it easier for people to get home- and community-based services, rather than resorting to nursing homes, said Matt Salo, executive director of the National Association of Medicaid Directors. The group has asked the Department of Health and Human Services to develop a process to allow states to apply for waivers of the maintenance-of-effort rule.

Democrats counter that lifting the requirements would cause people to lose health coverage just as the health law is aiming to expand it.

“To me, it’s absolutely essential with the framework of universal coverage for the states to maintain” current Medicaid coverage requirements, said Sen. Ben Cardin, D-Md. “I think you can make a very strong case that this is in your state’s best interest.”