MADISON, Tenn.  Two years after Holly Hawthorne was severely brain damaged when her motorcycle was hit by a bus in India, she passed a huge milestone in January: She moved out of a nursing home here and into the house where she grew up. 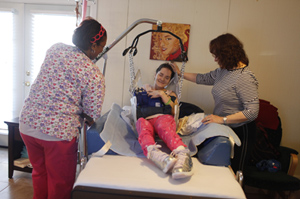 Holly Hawthorne is helped out of bed by her mother, Diane Allison, and CNA April Quinn. (Photo by Joshua Anderson for USA Today)

Her mother, Diane Allison, credits Hawthorne’s managed care plan for making the move possible. The insurer installed a mechanical chair lift in Allison’s two-story house, in nearby Antioch, and assigned an aide to visit Hawthorne every day to help her eat, bathe and get dressed. “I’m just so grateful,” says Allison, a nurse who recently retired and now cares for her daughter.

Hawthorne, a 32-year-old former dancer, is on Medicaid, the state-federal program for the poor and disabled that covers 48 million people across the country. She’s also part of an emerging trend: She gets her long-term care and other benefits through a private managed care plan that works for the state.

Desperate to rein in rising Medicaid costs, Tennessee last year became the sixth state to require its frailest and costliest patients – the elderly and disabled who need long-term care – to enroll in managed care plans.

At least 10 other states, including Florida, Maryland, New Jersey and Rhode Island, are considering introducing or expanding the use of managed long-term care. The trend is sparking opposition from the nursing home industry and raising some concerns from AARP and other patient advocates.

Traditionally, states pay Medicaid providers, such as doctors and nursing homes, directly for individual services. But many officials say that system makes it hard for them to predict and control Medicaid spending. Under managed care, states pay health insurers a fixed monthly fee for each Medicaid patient. The lump sum is used for all the patient’s costs, including physician and nursing home care.


Managed-care companies, including UnitedHealthcare and Wellcare Health Plans, say they can save money for states by keeping Medicaid patients who need long-term care at home, whenever possible, rather than in more-expensive nursing homes. They use care coordinators to monitor patients to help ensure they’re getting the right care in the most appropriate setting. 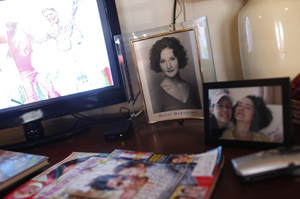 Hawthorne’s health insurer, Amerigroup, estimates that it will spend about $37,000 a year for her care at home, compared to $55,000 for a year in a nursing home. Over time, those kinds of savings should help hold down Medicaid costs, benefiting both the state and taxpayers, says Patti Killingsworth, Tennessee’s chief of Medicaid long-term care.

Tennessee pays its Medicaid health plans – UnitedHealthcare and Blue Cross and Blue Shield of Tennessee, in addition to Amerigroup – an average of $4,400 per member per month.

AARP and some other advocates worry that, because of the incentives to restrain costs, managed care plans might make it harder for patients to get the services they need. The nursing home industry, which gets about two-thirds of its revenues from Medicaid, is complaining as well. “Managed care is not a panacea,” says Joe DeMattos, president of the Maryland Health Facilities Association, the state’s nursing home lobby.

‘The Train Is Coming Down The Road’


But state officials around the country say they have little choice but to make more aggressive use of managed care. The long-term-care population makes up 25 percent of Medicaid enrollees but accounts for more than two-thirds of total program spending. Moreover, the system is headed for even more strains as baby boomers age.

Seventeen states already require other Medicaid enrollees – poor children and pregnant women, among others – to sign up for managed care. As for long-term-care patients:

— Texas, which already requires Medicaid recipients in Houston, San Antonio and Austin to use managed long-term care, has begun requiring it as well for enrollees in the Dallas-Fort Worth area.

—California plans to require its Medicaid long-term-care enrollees to sign up for managed care plans later this year.

Given states’ drive to save money, nursing home officials concede they can no longer block managed care outright. “The train is coming down the road,” says Nina Willingham, president of the Florida Health Care Association, the nursing home lobby.

But the nursing home industry has had some success in affecting how the health insurers do business. In Tennessee, for example, nursing homes successfully lobbied the state to prohibit health plans from lowering their payment rates to nursing homes or dropping facilities from their networks.

About 28,000 long-term-care patients are now enrolled in health plans in Tennessee. “It’s gone remarkably smoothly,” says the state’s Killingsworth. She says that 345 recipients have been moved out of nursing homes and into their own homes.

One was James Roland, 73, a retired truck driver who lost both legs to diabetes and entered a nursing home last July, “I thought I would never get out,” he says.

But then Linda Del Rosario, a care coordinator at UnitedHealthcare, arranged for an aide to help him bathe and get dressed, and got a mechanical lift to help him get in and out of bed. That allowed him to move home just before last Thanksgiving.

Even wary patient advocates, such as Gordon Bonnyman, executive director of the Tennessee Justice Center, say managed care offers some pluses: Any money saved can be used to expand long-term care services outside of nursing homes.

In 2009, about 90 percent of Tennessee’s Medicaid long-term-care funding went to nursing homes, according to TennCare, the state’s Medicaid agency. As a result, there were long waiting lists for enrollees who wanted home- and community-based services. But after Tennessee awarded long-term care contracts to three Medicaid health plans, those waiting lists shrank sharply.

The move to managed care has some complications. For example, most of the long-term-care enrollees also are on Medicare, the federal health program for the elderly and disabled. Since Medicare provides primary coverage for doctor, hospital and pharmaceutical services, that limits the Medicaid plan’s ability to coordinate care; it might not know, for example, when a member is admitted to a hospital.

Diane Allison, Hawthorne’s mother, says she is thankful for the way her daughter’s health plan has handled her care. The care coordinator, Karen Mudry, spent months planning Hawthorne’s move home. A former home health nurse, she lined up aides to provide home care and arranged for the special van to take Holly home. In addition, she has arranged for home care aides to occasionally work additional hours so Holly’s mother can get some rest.

Now, says Allison, Holly “seems very content and happy and I know she is getting more rest.”

‘Staying Away From Grandma’ Isn’t An Option In Multigenerational Homes