The predictions were dire: Coronavirus lockdowns would put millions of Americans out of work, stripping them of their health insurance and pushing them into Medicaid, the health insurance program for low-income people.

In California, Gov. Gavin Newsom’s administration projected that the pandemic would force about 2 million additional people to sign up for the state’s Medicaid program, called Medi-Cal, by July, raising enrollment to an all-time high of 14.5 million Californians — more than one-third of the state’s population.

But July is almost over, and Medi-Cal enrollment has hovered around 12.5 million since March, when the pandemic shut down much of the economy — though enrollment ticked up in May and June, according to the latest data from the state Department of Health Care Services, which administers the program.

“It’s a mystery,” said Anthony Wright, executive director of Health Access California, an advocacy group for health consumers. “We have lots of plausible explanations, but they don’t seem to add up.”

Even the state is stumped. The enrollment data is preliminary, and Medi-Cal officials expect the numbers to grow as eligibility appeals and other “unusual cases” are resolved, but not by 2 million people, said Norman Williams, spokesperson for the Department of Health Care Services.

The department based its projections on the state’s experience with the Great Recession a decade ago, a comparison that it now acknowledges was misguided because the pandemic did not spur a purely economic crisis. The state failed to predict people would avoid care at clinics and hospitals during this public health crisis, and thus be less likely to need coverage immediately.

“The current situation is far more complex because it involves both economic and health decisions, creating a more complicated picture more closely related to that seen during the 1918 influenza pandemic,” Williams said in a prepared statement.

Even with the faulty comparison, it’s not clear why more Californians haven’t enrolled, he said.

“The state prepared an estimate based on the best data available, during an unprecedented and rapidly evolving situation,” he said.

The miscalculation meant the state likely allocated more money to Medi-Cal than the program now needs, even as lawmakers struggled to find ways to prevent deep health care cuts and close a massive $54 billion budget deficit as they negotiated the 2020-21 state budget in May and June.

And a more accurate estimate could have potentially funded new programs, such as expanding Medi-Cal to unauthorized immigrants age 65 and up, some state lawmakers and advocacy groups said.

Newsom backed that expansion of Medi-Cal, estimated to cost $80.5 million in the first year, in his January budget proposal but abandoned it in May, citing California’s financial crisis spurred by the pandemic.

“We are talking about life-or-death services, so to say I’m frustrated is putting it mildly,” said state Sen. Holly Mitchell (D-Los Angeles), who chairs the Senate budget committee and leads budget negotiations in the upper house. “It’s irritating to me that they can be so off.”

The new state budget puts Medi-Cal’s overall cost at $115 billion, of which $2.4 billion in state money has been earmarked for caseload growth. Yet it’s unclear how much of that could have been available to fund other programs or stave off cuts had the caseload projection been more accurate, department officials acknowledged.

Most states predicted their Medicaid enrollment would rise due to the pandemic, though many are seeing similar delays in Medicaid sign-ups, said Cindy Mann, a partner at the legal and consulting firm Manatt Health who served as federal Medicaid director for the Centers for Medicare & Medicaid Services during the Obama administration.

Washington state, like California, hasn’t seen its Medicaid caseload grow as expected, said MaryAnne Lindeblad, its Medicaid director. It projected up to 95,000 people would join the program by now, yet it has seen 80,000 new enrollees since March.

“It’s been a little bit surprising,” she said. “There’s so much going on in people’s lives right now and signing up for Medicaid doesn’t seem to be one of them.”

Yet a record number of Americans have lost health insurance as a result of the COVID-19 pandemic and corresponding economic crash, according to a new report from Families USA, a national health advocacy group. California experienced the largest increase in newly uninsured residents of any state so far when an estimated 689,000 people lost coverage between February and May this year, the study shows.

“It’s a different kind of downturn and that might explain some of the reason we’re seeing lags across the country,” Mann said. “But unless unemployment numbers turn around dramatically, which is not the prediction, I think we will see the number of uninsured people continuing to grow and turn to the program.”

There are several theories about why Californians who have lost their jobs during the pandemic have not yet enrolled in Medi-Cal.

The pandemic has also created new sign-up hurdles. With libraries, schools, community centers and county health care offices largely closed during lockdowns, uninsured residents have had fewer places to enroll. Hospitals and clinics also frequently enroll uninsured people into the program, but many healthy people are avoiding treatment for fear of being infected with COVID-19.

And those who have lost jobs may still have work-based coverage because employers planned to rehire them and kept them on job-based insurance plans, or because they’ve signed up for COBRA insurance temporarily.

Enrollment could also be lagging because the service industry has been hit hard, and many low-income workers in restaurants, bars or salons were already enrolled in Medi-Cal.

“About a quarter who were at risk of losing jobs were already enrolled when the crisis started,” said Laurel Lucia, director of health care programs at the Center for Labor Research and Education at the University of California-Berkeley. 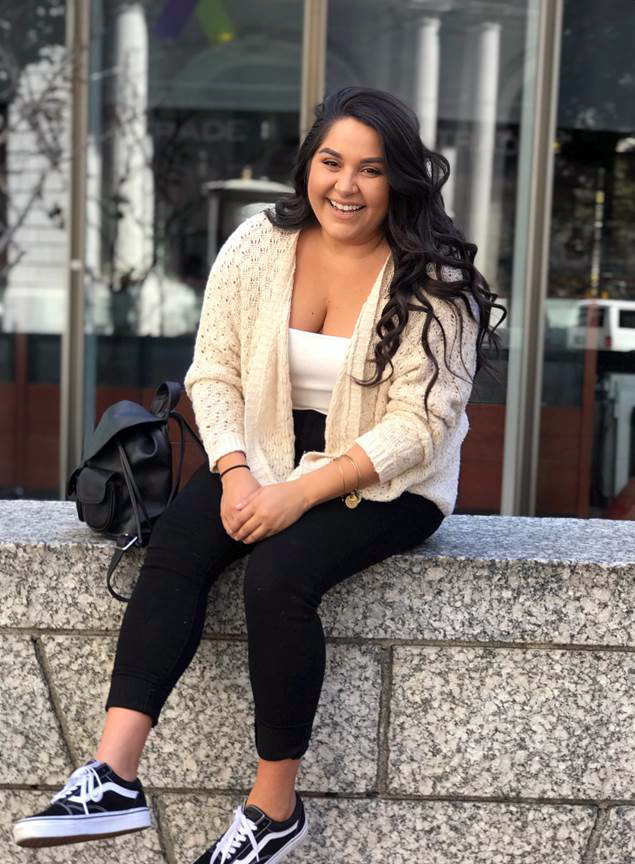 Vanessa Poveda lost her health insurance after losing her job as a server at a San Francisco gastropub. She thinks she probably qualifies for Medi-Cal but hasn’t signed up yet, in part because the task feels daunting. (Courtesy of Lindsay Thomas)

Vanessa Poveda, 28, wasn’t among the service workers already enrolled in Medi-Cal when the crisis hit. Instead, she had health insurance through her job as a server at Bartlett Hall, an upscale gastropub near San Francisco’s Union Square.

When Poveda was laid off during the first round of coronavirus closures in March, the restaurant extended her health coverage for 30 days before it expired, she said. Now unemployed and uninsured, she thinks she probably qualifies for Medi-Cal but hasn’t signed up.

“I haven’t really gotten around to it,” she said.

Because Poveda is relatively healthy, she said, enrolling in coverage isn’t as urgent as some of her other needs.

“Medical insurance is definitely a top priority for me,” she said, “but I also need a roof over my head.”

In California, another factor may be at play. The Trump administration’s “public charge” policy may be having an outsize impact on Medi-Cal enrollment because of the state’s large immigrant population, said Hamutal Bernstein, a researcher at the Urban Institute. The rule allows federal immigration officials to more easily deny permanent residency status to those who depend on certain public benefits such as Medicaid.

“A lot of immigrant families are being disproportionately impacted by economic and health hardship and are increasingly needing some of this assistance,” Bernstein said. But “a lot of people are afraid of getting any kind of help.”

Federal rules also prevent the state from kicking anyone off Medicaid during the pandemic, which means people who normally would have fallen off the program will stay enrolled, contributing to the state’s inflated projections, Williams said.

The department said it is working to get out the word that Medi-Cal is available, but Mitchell is urging the state to do more.

“I’m concerned not enough outreach is being done,” she said. “We expect people to magically know they may qualify for Medi-Cal and they should go online and apply.”