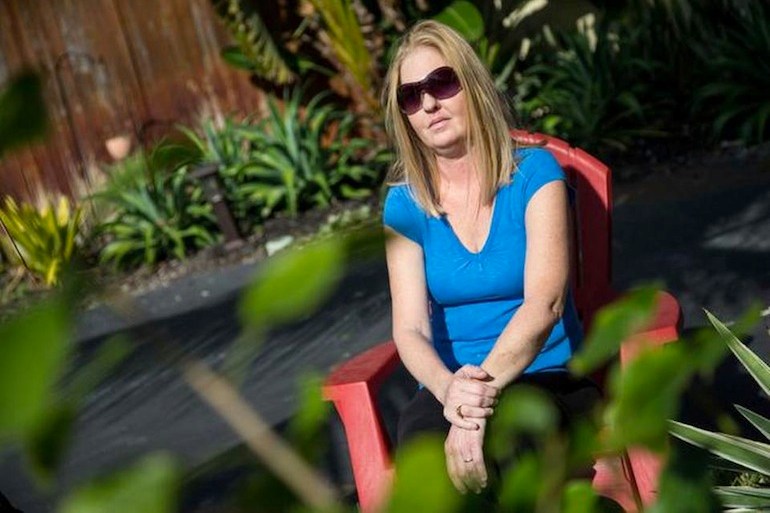 Malissa Miller applied for disability and was placed in the state’s new privatized, Medicaid managed care system, which offers different plans depending on your county of residence. But none of the Medicaid plans offered in Broward County, where Miller lives, allowed her to see the doctor she believed could save her life (Photo by Jon Durr/Miami Herald).

But the new managed care system is also exposing some Floridians in Medicaid, the state/federal insurance program for children, the poor and disabled, to the uncertainties of the private market for the first time.

Malissa Miller, a Medicaid recipient born with a rare and deadly intestinal condition called Hirschsprung’s disease, thought for months that she would have to move from her Broward home to another county in order to receive the treatment she believed would save her life.

She says her insurer repeatedly told her she could not visit a renowned gastroenterology clinic at the University of Miami because it was not included in the insurer’s provider network.

Other insurers in Miami-Dade and Palm Beach counties — the two counties a few miles to the south and north — offered plans that would pay for Miller’s treatment at the UM clinic.

As part of Medicaid managed care, insurers choose which counties to sell plans in. None of the four insurers providing coverage in Broward included the clinic in their networks.

Hours after the Miami Herald called the insurer, Sunshine Health, to inquire about her case, Miller says she was told she could now visit the clinic.

In a statement to the Herald, Sunshine said that it had given Miller special permission to seek treatment at the clinic in October. “Our main focus is ensuring this member gets the services she needs,” wrote Alia Faraj-Johnson, a spokeswoman for the company.

She did not address questions about how or whether Miller could have misunderstood the options available to her. Faraj-Johnson also said Sunshine would include the clinic in its network as of Jan. 1.

Patricia Meyer, Miller’s sister-in-law and healthcare surrogate, said she spent weeks trying to convince a case manager at Sunshine that Miller needed to continue treatment at the clinic after a promising initial visit in September, when she was still covered under a previous Medicaid insurance plan.

“They just would not listen,” Meyer said.

Meyer said the company, which is owned by Missouri-based Centene, refused and told Miller to seek treatment with its in-network GI specialists in Broward. But Miller didn’t like the doctors. She felt that her best hope lay with the UM clinic — and she didn’t want to relocate to one of the counties where the clinic would be covered.

At 44, Miller has built a life in Broward, a life that doctors told her parents would last just a few months after she was born, and has even raised a son, another medical unlikelihood, her doctors said.

People with rare and serious conditions like Miller could be at risk of being denied the treatment they need in the private market, said Joan Alker, executive director of the Center for Children and Families at Georgetown University and an expert on Florida’s Medicaid system.

“This is exactly what I was worried about when Florida began moving to managed care,” Alker said. “There must be exceptions for people with rare conditions to access the care they need.”

She called Miller’s initial inability to seek treatment at UM a potential sign of “network inadequacy.”

Greg Mellowe, policy director at the consumer advocacy group Florida CHAIN, also worries about the quality of care under the new system.

“Although the purpose of the Medicaid program is to ensure recipients’ access to appropriate and timely care, the plans ultimately report to shareholders or investors, not recipients,” Mellowe said.

The state has long contemplated switching to managed care and launched pilots in several counties starting in 2005. Broward was among the counties included. Eligible Medicaid recipients around the state enrolled in private plans earlier this year.

Plans must meet prescribed patient-doctor ratios, including a minimum of one licensed and board-certified GI specialist for every 8,333 patients, in order to win state approval, Senior said. And 95 percent of doctors in a network must accept new patients, he said.

Sunshine met the state’s adequacy requirement. Even so, Senior said, “they may not have every single GI doctor in the area in their network.”

“Someone with a need for a GI specialist in the private sector would deal with the same issues,” he said.

Senior said that because Sunshine provided a satisfactory network, the state could likely not force the insurer to let Miller seek treatment at the UM clinic. “We’d have no contractual lever there,” Senior said.

“It’s really difficult to say from a quality standpoint that the GI service at UM is necessarily better than anything available in Broward,” he said.

Under the old system, the state paid doctors and hospitals directly for every service they provided to patients — called a fee-for-service system. Now providers must agree to contracts with private insurers who reimburse them for treating patients on Medicaid.

The insurers are paid a fixed monthly fee by the state for every recipient on their books. The rate changes depending on whether the recipient has a chronic condition and other factors.

In Florida this year, Medicaid will cost $22.1 billion in state and federal dollars. Most states now use some form of managed care for Medicaid.

Miller is no stranger to the healthcare system; she spent much of her childhood in Jackson Memorial Hospital.

Hirschsprung’s disease leaves the colon unable to pass stool and requires extensive surgery at birth to correct. Miller was also born without a fully developed anus or rectum and had to have them surgically constructed.

She’s averaged about one major abdominal surgery a year and has less than four inches of her large intestine left. A healthy person would have five feet.

But the surgeries worked and for years Miller enjoyed a happy life working in various trades and raising her now 21-year-old son, Scott. In April, though, Miller started suffering from extreme vomiting, diarrhea and pain.

Dehydrated and exhausted, she was hospitalized repeatedly, and eventually diagnosed with Crohn’s disease, which inflames the bowel, and ulcerative colitis, which causes painful sores in the intestine. She also suffers from hepatitis C, the result of a tainted blood transfusion in the ’70s.

In August, she said, her doctors at Holy Cross Hospital in Fort Lauderdale told her they’d done what they could but recommended that she seek care at UM’s gastroenterology department, which specialized in Crohn’s and colitis.

In an interview, Miller lifted her shirt to show a painfully swollen belly crisscrossed by bruises and scars. “I’m in pain all day,” she said. “And the swelling won’t go away even if I can’t keep anything down.”

She said she couldn’t believe it when the UM clinic called last week and said she could schedule an appointment for early January. “I feel like there’s hope now,” she said.

Senior, Florida’s Medicaid director, urged Floridians on Medicaid to call or write the state Agency for Health Care Administration if they are unhappy with their plan or providers. He said it was important Miller had secured an appointment with her doctor of choice.

“People getting connected to care: This is how the system should work,” Senior said.

Medicaid Privatization May Pose Risk To Those With Complicated Health Needs