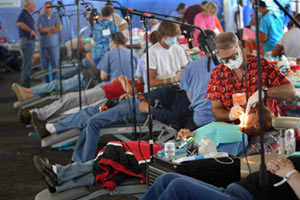 Wise County, Va., located in the mountains of Appalachia, is one of the poorest areas of the nation. Few people have full health insurance and even fewer have dental care, so thousands line up early to get care at this annual event. (Photo by John Moore/Getty Images)

Medicaid’s role in health reform is emerging as a flash point, exposing policy and political rifts not only between the two parties but also among Democrats themselves.

As part of efforts to extend health coverage to millions of uninsured Americans, congressional Democrats are pressing for a major expansion in the state-federal program for the poor and disabled. As a result, Medicaid, which now covers 60 million people, could pick up more than one-third of the 46 million uninsured. Those numbers are far from final, given that overhaul legislation is still being written and negotiated.

The disagreement centers on a critical issue: What’s the best way to cover impoverished Americans? Is it by expanding Medicaid? Or by providing subsidies for the poor to buy private insurance on new health insurance exchanges to be created by the legislation?

Most Democrats come down squarely on the side of Medicaid, saying it’s the most efficient and least expensive way to cover the poor. Rep. Frank Pallone, D-N.J., said the program is “one of the best ways” to make sure lower-income people are covered.

Most Republicans, leery about expanding a big government program like Medicaid, argue that private insurance is a better way to go. Some moderate Democrats agree. Sen. Ron Wyden, D-Ore., calls Medicaid a “caste system” that hurts poor people’s choice of doctors and the care they receive. “I want poor people in this country to have the kind of quality of care and dignity that members of Congress have,” he said. And some governors worry that, sooner or later, they’ll end up paying for a big chunk of any Medicaid expansion.

In the end, though, Medicaid’s role in health reform may be bolstered by simple math: Studies suggest that enrolling people in the program would be substantially cheaper than giving them subsidies for private insurance. That could have a big impact on lawmakers trying to figure out how to pay for a health overhaul.

Medicaid, which spent $330 billion in the 2007 fiscal year, is considered one of the most complicated of government programs. Overall, the federal government provides 57 percent of the money and the states chip in the rest. The federal matching rate varies from state to state, with poor states getting a higher rate.

Here are some of the issues being debated by lawmakers:

Medicaid versus private insurance: Under legislation pending in Congress, the uninsured could get coverage from a few different sources: Medicaid; private insurance sold through the new health exchanges or, if it’s created, a government-run insurance plan.

Provisions in House and Senate bills would expand Medicaid eligibility, resulting in the enrollment of several million of the uninsured. (That’s on top of an expansion stemming from the stimulus legislation, which earlier this year pumped $87 billion into Medicaid programs.)

The legislation would affect different states differently. Many northern states, for example, already have expanded their programs to the levels under consideration in Congress, so they may not benefit at all.

Some critics say it makes little sense to channel millions more people into Medicaid, given that the program has been a budget-buster for states. States’ spending on Medicaid ranks second only to education funding.

“States are facing a combined budget shortfall of more than $200 billion over the next two years, with rising Medicaid costs as one of the primary drivers,” said Sen. Orrin Hatch, R-Utah.

“Governors and state legislatures across the nation are rightfully concerned that any proposal that will expand Medicaid with full federal assistance will only last for a limited time and states will then be left holding the bag in the long run,” he said.

But Medicaid backers say the program is the better choice–both for the taxpayers and the enrollees. “Medicaid is by far the better deal from society’s point of view, from the consumer’s point of view,” said Leighton Ku, a health policy professor at George Washington University’s School of Public Health and Health Services.

He said that it would cost up to 30 percent more, in terms of total medical spending, to put poor people in subsidized private insurance plans rather than in Medicaid. And he said that individuals would pay seven times as muchan estimated $771 per year in out-of-pocket expenses versus $109-in private plans, because Medicaid has low-cost sharing requirements.

Who Pays: Expanding Medicaid under the scenarios being discussed on Capitol Hill would cost tens of billions-if not hundreds of billions-of dollars over 10 years. The exact pricetag depends on several major factors, including the extent of the expansion and whether Congress raises Medicaid reimbursement rates to try to ensure that doctors and other providers are willing to treat Medicaid patients.

One thing is clear: With the states wracked by recession, and governors terrified about getting stuck with a bigger Medicaid bill, the federal government would have to pay the entire tab for any expansion, at least for the first few years. Under a Senate Finance Committee proposal, the federal government would cover the entire cost of the expansion for five years. After that, states would pick up part of the cost.

Under the House Democrats’ bill, the federal government would permanently foot the bill for the expansion-and for raising reimbursement rates for primary care physicians and practitioners. The goal is to increase Medicaid beneficiaries’ access to primary care services.

Some Medicaid advocates say it would be important to spend additional funds for outreach and enrollment so that people who become eligible for Medicaid actually sign up.

Who Would Benefit: The expansion would have the biggest impact in states with high numbers of poor uninsured people and tight Medicaid eligibility standards. That tends to be states in the South and the West.

In addition, many states already cover children whose families’ incomes are above the poverty level. That means a Medicaid expansion would have a greater impact on poor adults, especially those who don’t have children. Currently, six states provide coverage to childless adults, although others provide some limited benefits.

While Medicaid provides coverage to half of low-income children, “nearly half of poor and a third of near-poor adults are left uninsured,” Diane Rowland, executive director of the Kaiser Commission on Medicaid and the Uninsured, told Congress in May. (The commission and Kaiser Health News are part of the Kaiser Family Foundation.)

According to an analysis by Avalere Health, a health care consulting firm based in Washington, Medicaid enrollment under the House Democrats’ plan could climb to 83 million, an increase of about 28 million from current enrollment estimates, once legislation is fully phased in. An expansion of Medicaid eligibility of up to 150 percent of the poverty level for children and parents and up to 115 percent of the poverty level for childless adults would raise Medicaid enrollment to about 85 million. Both the House and Senate Medicaid plans could reduce the number of uninsured people by up to 18 million, according to Avalere’s analysis.

The researchers assumed that health overhaul legislation would include a requirement that everyone have insurance, and that 90 percent of those eligible for Medicaid would enroll. Avalere also notes that not all of the Medicaid enrollees are currently uninsured and that some individuals would switch from other types of health coverage, such as the Children’s Health Insurance Program or private coverage.

–Julie Appleby and Jaclyn Schiff contributed to this report.

Hot-Button Health Issue: Is Medicaid or Private Insurance Better for the Poor Uninsured?