Douglas doesn’t think the state and its contractors have held up their end. In recent years she says she has fought battle after battle to secure essential care to control Charla’s seizures, protect her from choking and tube-feed and medicate her multiple times a day. 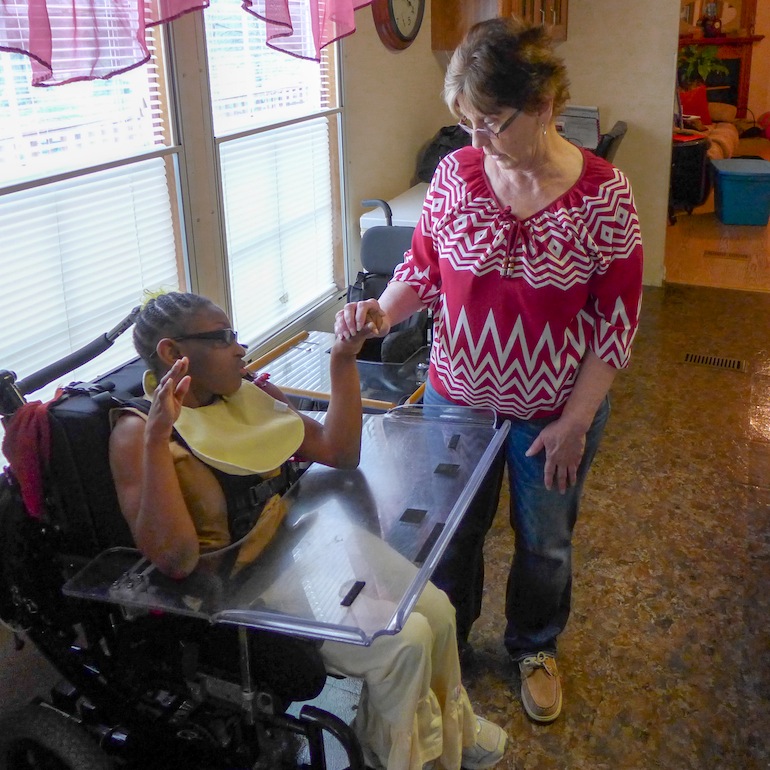 Charla Douglas, who had a bad experience with TennCare, and her adopted mom, Lynda Douglas in Hartsville, Tennessee (Photo by Jay Hancock/Kaiser Health News).

“If you have special-needs children you would not want to be taking care of these children and be harassed like this,” Lynda Douglas said. “This is not right. No way, shape or form is this right.”

State Medicaid programs across the country, which operate with large federal contributions, have outsourced most of their care management in recent years to insurance companies like the ones in Tennessee. The companies cover poor and disabled Medicaid members in return for a fixed payment from taxpayers.

That helps government budgets but sets up a fundamental conflict of interest: the less care these companies deliver, the more money they make. Nationwide, such firms made operating profits of $2.4 billion last year, according to regulatory data compiled by Mark Farrah Associates and analyzed by Kaiser Health News.

In an attempt to manage that tension, Washington regulators are about to initiate the biggest overhaul of Medicaid managed-care rules in a decade. Prompted by growth of Medicaid outsourcing, concerns about access to care and stories like Charla Douglas’, the regulations are expected to limit profits and set stricter requirements for care quality and the size of doctor networks.

“We want the enrollees to have timely access to integrated, high-quality care,” James Golden, who oversees Medicaid managed care for the U.S. Department of Health and Human Services, told a group of insurance executives in February. “There’s been some question about some of these issues.”

Tennessee Medicaid plans — operated by BlueCross BlueShield of Tennessee, UnitedHealthcare and Anthem — are among the most profitable Medicaid insurers in the country, according to data from Milliman, a consulting firm. The state, which runs one of the most respected Medicaid managed-care programs in the country, adopted that design in the 1990s and named it TennCare.

State officials point to quality data and survey results as evidence that the companies are doing a good job while allowing the state to spend far less on Medicaid than predicted. More than 90 percent of TennCare customers surveyed last year said they were very satisfied or somewhat satisfied, officials note.

“Our patient satisfaction scores are at the highest over the last five years they’ve been in 20 years of the program,” said TennCare director Darin Gordon, who worries new HHS rules could hinder states from improving Medicaid quality while controlling costs. “Don’t hamstring us from doing other innovative activities that are going to be able to help try to improve the health and wellbeing of our population.”

But doctors and patient advocates say state savings and insurer profits come at the price of inadequate physician networks, long waits for care and denial of treatments like the ones for Charla Douglas. Answering another question in the survey, 30 percent of adults said the quality of their TennCare care last year was only fair or poor.

“BlueCross is more organized and more strategic in its denials, and the other plans might be more careless, but the way it plays out for folks on the ground level is the same,” said Michele Johnson, executive director of the Tennessee Justice Center, a nonprofit law firm that helps TennCare members navigate the system. “What we find is that all three plans will deny care.”

Medicaid’s expansion in most states under the Affordable Care Act has obscured another big but more gradual change: More than half of Medicaid beneficiaries now receive coverage from private insurers, known as managed care companies, with incentives to limit care. The surge helped prompt inquiries by HHS’ inspector general last year that found widely varying state standards for access to doctors and poor information for members on where to find them.

In one nationwide study, half the doctors listed in official directories weren’t taking Medicaid patients. Among doctors who were, a quarter couldn’t see patients for a month.

In Tennessee views diverge sharply on whether the proposed federal rules, expected soon, are necessary. Many say the system is far from adequate.

Dena Deweese, who runs a primary care practice in Knoxville, has problems finding specialists for her patients who are covered through Amerigroup, a TennCare contractor and Anthem affiliate that recently began operating in the area.

“I kept running into no, no, no,” she said. “I’ve still got lots of folks that are simply not taking it.”

Amerigroup says it only recently started covering TennCare members in the area and is still expanding its network. Since January “we have added more than 3,600 specialty physicians,” said company spokeswoman Cindy Wakefield.

TennCare’s member-per-doctor standard for primary care is among the worst in states that have such rules — one provider per 2,500 members. Even for urgent care, TennCare rules allow waiting times of up to two days for an appointment.

The state allows one neurologist per 35,000 TennCare members, although most states have no network standards at all for such specialists.

Even when children are having seizures, Crossville pediatrician Dr. Suzanne Berman often can’t get a TennCare neurology referral for weeks.

“I have a kid who urgently needs to see a specialist,” she said. “We call and we beg. ‘We can see you in three months,’ the neurologist’s nurse will say. ‘OK we can see you in two weeks.’ No, we can’t wait that long.”

Often she must send the child to a hospital emergency room to get the proper care — it’s “the only way I have found to jump the queue,” she said.

“The cost in that population keeps going up and up and up,” he said.

“If they can make it hard on [a patient], and make it so the networks are poorly funded or poorly populated, then nobody can go see anybody,” he said. “They don’t have to spend any money.”

Evelyn Manley said she had to fight to get TennCare’s insurers to cover even a portion of the behavioral therapy that doctors recommend for Christian, her five-year-old son with diagnoses of autism and Down syndrome.

“I’m grateful” for TennCare, she said. “But it could definitely improve.”

Lynda Douglas, 69, knew she wanted to adopt Charla a decade ago as soon as she took her for foster care from the state. Charla’s problems include cerebral palsy, a badly curved spine, frequent seizures and osteoporosis. She cannot speak and takes most food by tube. She is 16, weighs less than 80 pounds and loves Barney the dinosaur.

Douglas, who lives about an hour east of Nashville, says she has often struggled to get adequate treatment for Charla. But she was grateful that TennCare’s contractors sent daytime nurses to monitor her seizures, keep her from choking, activate an implanted device to control seizures, administer medicine and maintain a tube that delivers medicine or nourishment eight times a day.

Then more than a year ago UnitedHealthcare reduced the nursing to one hour a day even though Charla’s condition hadn’t improved. Douglas protested with the help of the Tennessee Justice Center and a pro-bono lawyer and won, but TennCare appealed. It took two more rounds of adjudication before a judge ruled in Douglas’ favor late last year.

The managed-care companies “are making a mint down here,” Douglas said. “They’re getting rich at the expense of the kids. This is not right.”

“Our care teams worked with the family and with [Charla Douglas’] physicians and other providers to assure that her services were appropriate for her special health care needs,” UnitedHealthcare said in a prepared statement. The managed-care plan followed TennCare’s contract and care guidelines, it said.

This year Charla switched to the BlueCross TennCare plan to better coordinate her care with two other disabled children in the Douglas household, one foster and one adopted. In March the plan denied coverage of the seizure-control pump that Charla’s doctors prescribed, saying it was medically unnecessary.

BlueCross now says it will pay for the procedure. A spokeswoman blamed the initial denial on a “physician’s failure to provide the needed medical information.”

Like TennCare officials, the managed-care industry is urging HHS not to publish overly rigid regulations that bog plans down in paperwork and hinder them from making investments to keep members healthy.

“You’re dealing with a huge variation in population” covered by Medicaid from state to state, said Jeff Myers, CEO of Medicaid Health Plans of America, an industry lobby. “Each state has an insurance commissioner. Presumably they’re very good about making decisions about insurance regulation” to suit local conditions, he said.

Myers and other officials expect HHS to issue rules for “medical loss ratios” that limit profits and force plans to spend a minimum portion of revenue on medical care. Such restrictions already apply to other insurance under the health law.

TennCare director Gordon, who frequently advises other states on Medicaid, rejects suggestions that managed-care networks are inadequate or that contractors deny needed care. Third-party surveys show that 90 percent of Tennessee doctors take TennCare and most of them take new TennCare patients, he said, although consumer advocates dispute this.

TennCare members sometimes have trouble seeing specialist doctors, but so do patients in commercial plans, he said. Like many state Medicaid directors, he wonders how HHS can publish network rules for 50 states with widely varying geographies and health systems.

“We actually have a pretty solid network,” he said, with systems to closely track how contracted insurers are performing. The HHS investigation into Medicaid doctor networks “looked at it very narrowly” and “gives you a less complete picture of what’s going on in the states,” he said.

“Yeah, we’re a little concerned,” about the proposed rules to be published by the Centers for Medicare & Medicaid Services, or CMS, he added. “There are some things that we think may have adverse effects.”

Other Tennesseans tend to oppose Washington decrees no matter what they say.

“We need to keep CMS out of our business. They have done nothing but screw everybody up,” said Dr. Iris Snider, an Athens pediatrician who praises the job Gordon and other officials have done with TennCare. “It really worries me … when we finally get a system that’s working reasonably well for my patients.”

Medicaid’s Tension: Getting Corporate Giants To Do Right By The Needy