Medicine has changed a lot in the past 100 years. But medical training has not.

Until now.  Spurred on by the need to train a different type of doctor, medical schools around the country are tearing up the textbooks and starting from scratch.

Most medical schools still operate under a model pioneered in the early 1900s by an educator named Abraham Flexner.

“Flexner did a lot of great things,” said Raj Mangrulkar, associate dean for medical student education at the University of Michigan Medical School. “But we’ve learned a lot and now we’re absolutely ready for a new model.”

And Michigan is one of many schools in the midst of a major overhaul of its curriculum. 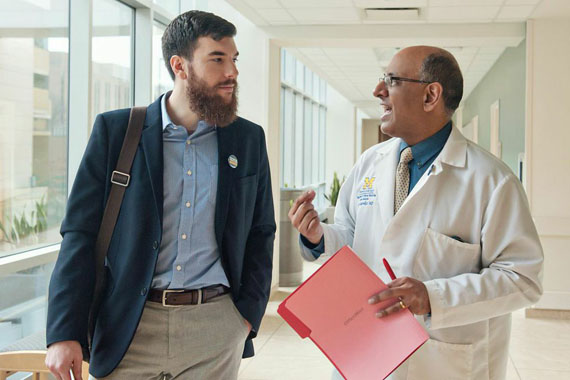 For example, in a windowless classroom, a small group of second year students are hard at work. They’re not studying anatomy or biochemistry or any of the traditional sciences. They’re polishing their communications skills.

In the first exercise, students paired off and negotiated the price of a used BMW. Now they’re trying to settle on who should get credit for an imaginary medical journal article.

“I was thinking, kind of given our background and approach, that I would be senior author. How does that sound to you?” asks Jesse Burk-Rafel.

It may seem like an odd way for medical students to be spending their class time. But Erin McKean, the surgeon teaching the class, says it’s a serious topic for students who’ll have to communicate life and death matters during their careers.

“I was not taught this in medical school myself,” says McKean. But she says today communication is more important than ever. “We haven’t taught people how to be specific about working in teams, how to communicate with peers and colleagues and how to communicate to the general public about what’s going on in health care and medicine,” she says.

It’s just one of many such changes. And it’s dramatically different from the traditional way medicine has been taught. Flexner’s model is known as “two plus two.” Students spend their first two years in the classroom memorizing facts and their last two shadowing other doctors in hospitals and clinics. Mangrulkar says when the curriculum was instituted it was a huge change from the way doctors were taught in the 19th century.

“Literacy was optional, and you didn’t always learn in the clinical setting,” he says. Shortly after Flexner published his landmark review of the state of medical education, dozens of the nation’s medical schools closed or merged.

But today, says Mangrulkar, the two-plus-two model doesn’t work. For one thing, there’s too much medical science for anyone to learn in two years – and most information can be quickly accessed from a smartphone or tablet. At the same time, medicine is constantly in flux. What Michigan and many other schools are trying to do instead is prepare doctors for the inevitable changes they’ll see over their practice lives.

“We shouldn’t even try to predict what that system’s going to be like,” he says. “Which means we need to give students the tools to be adaptable, to be resilient, to problem solve, push through some things, accept some things, but change other things.”

One big change at many schools is a new focus on learning not just how to treat patients, but about how the entire health system works.

Susan Skochelak is a vice president with the American Medical Association, in charge of an AMA effort that is funding changes to medical school programs at 11 schools around the country. She says the new focus has had an added benefit: Faculty members are learning right along with the students about some of the absurdities in the system as it is today.

Only because they have to guide students through the system do they discover, for instance, that some hospitals schedule patients for tests like MRIs around the clock. “And one of my patients had to come and get their MRI at 3 am. How do they do that? They have kids! ” she says faculty members have told her.

Sometimes it’s not doctors who are the best teachers about how the system works.

Doctors tend to focus on patient care, since that’s what they know, she says, but when it is time to learn about the system as a whole, it can be more fruitful to hook students up with the clinic managers.

Another major change is making sure the next generation of doctors is ready to work as part of a team, rather than as unquestioned leaders.

In another classroom at the University of California-San Francisco, several groups of students are practicing teamwork by working together to solve a genetics problem.

Joe Derisi, who heads the biochemistry and biophysics department at UCSF, is more guiding than teaching, as he gently suggests a student’s tactic is veering off course: “I would argue that it may not be as useful as you think, but I’m obliging.”

Onur Yenigun, one of the students in the class, says that working with his peers is good preparation .

The medical schools that are part of the AMA project are already sharing what they’ve learned with each other. Now plans are in the works to begin to share some of the more successful changes with other medical schools around the country.