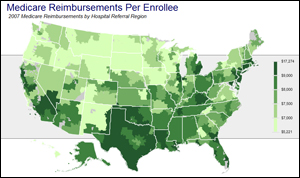 View Interactive Map
: Medicare spending for its enrollees has been growing at vastly different rates depending on where they live.

Provo, Utah – If there is any place that should have medical spending under control, this is it.

Residents are among the healthiest in the country. Many are Mormons who don’t smoke or drink, and outdoorsy folks devoted to active lives. The biggest hospital is run by Intermountain Healthcare, a medical system lauded by President Barack Obama for providing high quality care while restraining costs.

Until recently, Provo seemed to be a model for the nation. But spending on Medicare patients here has accelerated rapidly, as it has in many other areas of the country also known for cost-efficient care. The region’s transformation calls into question initiatives – including some in the new health care law – to encourage more profligate regions to learn from their frugal counterparts.

A major reason: Medicare recipients are receiving certain kinds of surgeries more frequently and are admitted for longer periods to intensive care units during their final days.

“It’s very discouraging to see costs increasing rapidly in those low-cost areas we believe to have good care,” says Paul Ginsburg, president of the Center for Studying Health System Change, a Washington-based research group. “They appear to be succumbing to the same forces that have led to high costs elsewhere.”

Experts say Medicare spending trends often parallel those in the country’s overall health system. In 2007, average Medicare spending per person in the greater Provo hospital market was $8,064. That was below the national average of $8,682, but far higher than it had been a few years before.

Between 2000 and 2007, Medicare spending in the Provo region rose on average 8.6 percent a year, nearly double the average national rate of 4.7 percent, according to data from the Dartmouth Atlas of Health Care, which analyzes geographic variations in health spending.

Provo’s spending increases aren’t an aberration. Annual average spending grew at 7 percent or more in other traditionally low-cost areas, including Oxford, Miss.; Wausau, Wis., and Durham, N.C. Even in Rochester, Minn., home of the highly regarded Mayo Clinic, and Salt Lake City, where Intermountain is headquartered, Medicare costs grew faster than the national average, according to Dartmouth.

On their own, these areas aren’t big enough to bankrupt Medicare. Still, the spending increases are particularly worrisome in places such as Provo where many providers have already made changes experts hope can hold down costs. These include adopting electronic medical records, focusing on prevention and increasing cooperation between doctors and hospitals.

But Harvard professor Michael Chernew noted in a recent article that “even the most efficient delivery systems must wrestle with the adoption of expensive new technologies.” Indeed, Provo’s regional hospital market, which stretches south of Salt Lake City down the Wasatch mountain range and includes more than 26,000 Medicare beneficiaries, has embraced some of the less admired traits of expensive health care markets, with dueling providers competing to offer the same kinds of high-tech services.

“The first surgical center in Utah County was built by a physician from the hospital,” says Rulon Barlow, a former county health board commissioner who runs the student health center at  Brigham Young University in Provo. “So what did the hospital do? It built a surgery center. It wasn’t too much longer that another outfit came in across the street.”

Much of this kind of rapid expansion is fueled by the Medicare’s traditional fee-for-service payment system, which rewards doctors who offer more services, health care experts say. Patients, for their part, seem only too happy to get the latest that medical technology has to offer, as close to home as possible. Physicians in the Provo region performed 17.3 percent more procedures on Medicare patients in 2008 than they did in 2000, outpacing the median national increase of 13.7 percent, according to a Government Accountability Office study.

The largest physician-owned practice in the state is the Provo-based Central Utah Clinic, which has grown fivefold over the decade and now houses more than 110 doctors, mostly specialists. Last year, it earned gross revenues of $200 million, clinic administrator Scott Barlow says, and its doctors saw 208,000 patients. That’s a remarkable number given that only 556,000 people reside in the Provo-Orem metropolitan area.

Central Utah Clinic’s sprawling campus, which sits across the street from Intermountain’s Utah Valley Regional Medical Center, has opened its own open heart program, chemotherapy center and a high-dose radiation machine so powerful that it operates behind 70,000 pound steel doors in a room called “the vault.” The clinic is home to some of the only providers in the area in a number of specialties, including cardiology.

The physicians have attempted to make it a one-stop shop for patients, even building a pharmacy on the lot. The physician-owners benefit financially from the use of these machines and facilities (except the pharmacy, which Utah law prohibits them from owning), but the clinic’s officials insist they guard carefully against performing unneeded procedures.

Dr. Scott Bingham, a cardiologist at the Central Utah Clinic, says area cardiologists have been performing fewer of the most expensive tests and surgeries in the last few years, which Dartmouth has not yet analyzed. “The only thing that I see increasing in Provo is the number of patients we see,” he says.

Intermountain also faces competition from HCA, the for-profit hospital chain. In 1998, HCA, welcomed into the area by commercial insurers feeling captive to paying whatever Intermountain charged, built Timpanogos Regional Hospital in Orem, the city just north of Provo. HCA also owns a hospital in the south. Timpanogos opened its own heart surgery program in 2007, and last year added two stories on top of the existing two floors.

Dr. Mike Kennedy, a family doctor and the chief of staff at Timpanogos, speculates that the area’s higher Medicare costs are due to better care. “You’re probably seeing more aggressive treatment earlier on in disease stages,” he says. “If we want excellent care, it’s going to cost excellent money.”

‘Trying not to cave’

To some, it’s inevitable low cost areas such as Provo will catch up to their more expensive peers as a greater proportion of medical spending goes toward expensive machines and nursing salaries, which are rising, says Greg Poulson, senior vice president at Intermountain. Aggressive marketing of the latest technology also is making it more likely that patients everywhere are demanding the same novel treatments, even ones that aren’t proven to work better, Poulson says.

“We’re seeing a homogenization of practice,” Poulson says. He says “at Intermountain we’re trying not to cave into things that we think are value diminishing. An example that I find frustrating is the use of robotics for surgery.”

Yet Intermountain has embraced the technology, too, announcing in 2008 that its surgeons in Salt Lake City “performed the first robotic surgery using the most advanced robotic surgical system in the world that utilizes 3-D technology and high definition (HD) vision that virtually extends the surgeon’s eyes and hands deep into the surgical field.” Utah Valley Regional has been busy growing in many areas. It’s added four MRI machines; expanded its intensive and critical care units; upgraded its trauma center; doubled the size of its emergency room; and built an outpatient center.

Amid all this new construction, Medicare patients in the region have been getting more and more medical attention. Dartmouth data covering 2000 through 2005 show some treatments were performed more frequently in Provo while decreasing nationally. Those included operations to clear blocked leg arteries and replace heart valves. Repairs of aortic aneurisms and hospitalizations for hypertension and asthma also rose faster than the national average. While many procedures are still performed less frequently than elsewhere, a Dartmouth study released in April singled out Provo for having the highest shoulder replacement rate in the country.

Commercial insurers say prices in Provo and the rest of Utah still remain lower than the national average. But some experts say that could change, too.

“We take some comfort that we have less of problem in Utah than elsewhere,” says Dr. Kim Bateman, vice president for medical affairs at HealthInsight, a Salt Lake City-based nonprofit that Medicare has authorized to find ways to improve the quality of care in Utah and Nevada. “But really I think we’re just behind them on the same curve – that we’re going to be subject to the same kinds of cost pressures as everyone else.”