Some days, the drivers showed up late to take Julian Myers to and from dialysis. Other days, they didn’t come at all. When that happened, Myers, who has end-stage kidney disease, scrambled to find a ride.

“My blood pressure was rising and I’d get anxious,” he recalled. “I was frustrated. It’s a regular appointment. They should be here on time.”

Myers complained regularly to LogistiCare, the company contracted to provide his medical transportation, but said the situation didn’t improve.

Medicaid beneficiaries like Myers are entitled to non-emergency, free transportation for medical appointments if they physically can’t get there on their own. But patient advocates and social workers say low-income and vulnerable patients in Los Angeles County have frequently been unable to get to their appointments on time — or at all.

“The uncertainty of when or if LogistiCare is going to come … takes a tremendous toll on people who have no resources,” said Toni Vargas, an attorney at Neighborhood Legal Services of Los Angeles County, a public interest law firm. “They don’t have the resources to say, ‘Enough is enough. I am going to go with another company.’”

Neighborhood Legal Services recently sued LogistiCare in Los Angeles County Superior Court, alleging that the company harmed the county’s Medicaid patients by failing to provide “safe, reliable, and timely transportation.” Among the patients ill-served by the company were a double amputee, a woman partially paralyzed from a stroke and a man with a brain injury, the suit said.

Patients who needed help were left on the curb or waiting for hours for rides, and others were harassed or driven in unsafe vehicles, according to the suit. Two patients allegedly were injured when their wheelchairs weren’t secured in a van.

Similar issues with LogistiCare, a Georgia-based private company that works in the majority of states around the nation, also have been reported in New Jersey, Connecticut, Wisconsin and elsewhere.

“This is a problem around the country,” said Sheldon V. Toubman, a staff attorney at New Haven Legal Assistance Association. “It directly impacts access to care, with people literally not going to medical appointments they had because they could not get there.”

They don’t have the resources to say, ‘Enough is enough. I am going to go with another company.’

LogistiCare officials declined to be interviewed but the general manager for California, Jody Gonzalez, said in an e-mail that the company takes the lawsuit very seriously, plans to mount a “vigorous defense” and believes the allegations will be disproven.

“We emphatically believe that the claims by [Neighborhood Legal Services of Los Angeles County] are completely inaccurate, and do not reflect the reality of how our system operates in LA or any of our operation centers,” Gonzalez wrote.

Gonzalez said the company serves 5.6 million people in California, including those on Medicaid (called Medi-Cal in the state), Medicare or with private insurance. The rides — done by a network of local drivers — help patients avoid unnecessary emergency room visits and hospitalizations.

“Given the scale of the trips that we manage, we have a very high level of satisfaction and a relatively low number of complaints,” Gonzalez wrote.

All complaints are investigated and addressed, though some are less serious than others, he said. Gonzalez added that the company regularly reaches out to families and facilities to address concerns and is already working to improve operations, by incorporating GPS technology for better oversight and adding more resources to serve the Medi-Cal population.

The California Department of Health Care Services, which oversees Medi-Cal in the state, declined to comment because of the pending litigation. Medi-Cal managed-care plans contract directly with LogistiCare.

In Connecticut, the state issued a bid for a new Medicaid contractor for non-emergency transportation because of the problems. The new company hasn’t yet taken over, and pediatric cancer patients and those with mental health issues, still frequently miss appointments because of delays and other problems, said Bonnie B. Roswig, a senior staff attorney at the Center for Children’s Advocacy in Connecticut. “Patients just aren’t getting the transportation they need,” Roswig said. “Medical providers are beside themselves.”

In New Jersey, a survey of more than 300 Medicaid recipients with mental health issues found that nearly a third had serious safety concerns and that almost one-quarter stopped using LogistiCare’s service because they were treated poorly or the services were not reliable. Proposed legislation in the state would require more accountability and training for Medicaid transportation services.

Vargas of Neighborhood Legal Services said she spent years trying to work with LogistiCare in California to improve the service. Though the company addressed some individual concerns, it failed to deal with broader underlying issues of untrained drivers, not enough drivers, poor management and a disorganized dispatch system.

“It was like putting Band-Aids on a leak in your swimming pool,” she said. “The exact same problems keep coming up again.”

The lawsuit also alleged that drivers often didn’t help certain patients to and from the door as required, and that some patients were transported without seat belts. 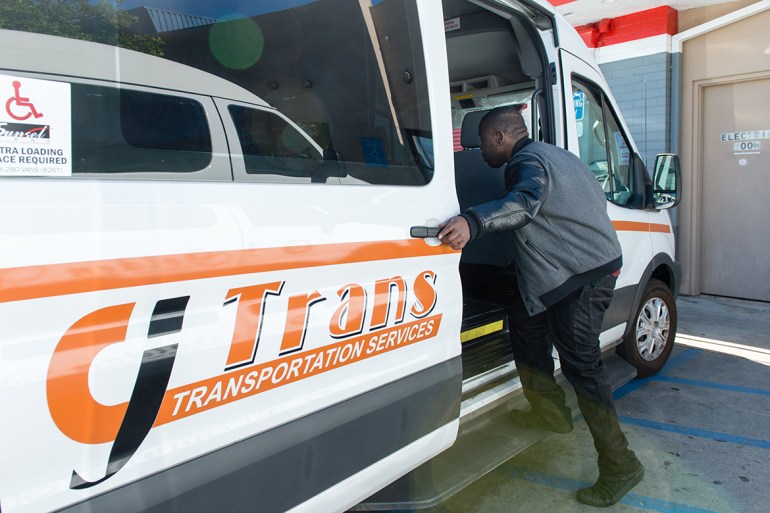 Myers gets into the ride-share van provided by Medicaid after his dialysis treatment at DaVita Hollywood Dialysis Center in Los Angeles. Myers, who has end-stage kidney disease, requires dialysis three times a week and relies on the medical transportation. (Heidi de Marco/KHN)

Shelly Frasier, a social worker at the DaVita Hollywood Dialysis Center in Los Angeles, where Myers receives treatment, said the unreliable transportation is both inconvenient and dangerous for patients.

“It’s really important to have the consistent filtration of the blood,” she said. “That is what is keeping them safe and alive. Missing just one treatment can put them in a perilous place.”

Frasier said she has often called LogistiCare, only to see the problems occur again. “There is no incentive to fix the problem,” she said. “It’s just a mess.”

Myers, an aspiring screenwriter, said he worried about his health each time a ride was late. If he was forced to have a shorter dialysis session, Myers said, he came home nauseated.

Another one of the plaintiffs, Hassan Allen, is diabetic and wears prostheses after having both legs amputated. He said he is weak and unsteady after dialysis and relies on the drivers to help him get home safely and quickly.

Several times, Allen said, drivers arrived long after his appointment ended. “When you finish dialysis and you have to sit around and wait an hour or two for transportation to pick you up, it’s a very tough situation,” said Allen, 44, who lives in Los Angeles. “You are agonizing and extremely frustrated.”

Allen is supposed to get help to and from the door, but he said LogistiCare regularly sent cabs with drivers who didn’t do that. “The taxicab situation was just untenable,” he said.

“It doesn’t matter what you tell them,” he said of LogistiCare. “Nothing changes. … Patients who are being poorly served by them deserve better.”