An Obama administration announcement about payment rates for Medicare Advantage plans in 2015 has set off a dispute about how large – or small – the changes really are.

Late Friday, the Centers for Medicare & Medicaid Services announced proposed rates that officials said could mean payment reductions of 1.9 percent for the private plans in the program.

But insurers, who have led a fierce lobbying campaign against payment reductions, say the Medicare Advantage plans would sustain a far deeper cut. That’s because the lower payment rates will be combined with new health law fees on health plans, a phase-out of the “star rating” system that helped buffer the reductions for Medicare Advantage plans in prior years and Medicare cuts in the automatic federal spending cuts known as “sequestration.” 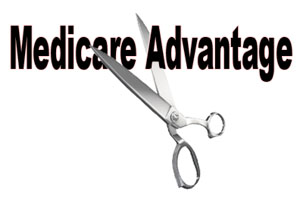 One insurance industry official, who asked to be not identified Sunday because his organization was still analyzing the impact of the CMS announcement, estimated that Medicare Advantage plans would see their rates drop by a total 6 percent next year.

In a statement, the industry group America’s Health Insurance Plans’ (AHIP) also noted that a number of factors impact Medicare Advantage payment rates. “The growth rate percentage included in the rate notice is only one factor and does not represent what the total cut will be when other factors are included,” AHIP said.

Despite industry concerns in recent years about cuts in federal funding, the program continues to grow. Enrollment in Medicare Advantage plans rose in 2014 by 8.9 percent to 15.9 million enrollees, up from 14.6 million in 2013, according to a new analysis from consulting firm Avalere Health. Approximately 30 percent of Medicare beneficiaries are enrolled in the plans, which are offered by private insurance companies.

The government provides payments to the insurers for Medicare-covered benefits, such as hospital and physician services, but the plans often offer extra benefits, such as hearing aids or gym memberships, that are not available in traditional Medicare. Most Medicare Advantage plans require that beneficiaries receive care from physicians, hospitals and other providers that contract with those plans. Traditional fee-for-service allows beneficiaries to visit any doctor or provider that accepts Medicare.

Insurers and other Medicare Advantage advocates said earlier this month that cuts could cause premium increases and benefit reductions.

Cuts to Medicare Advantage plans are part of the $716 billion in Medicare spending reductions the health law calls for over the next decade.

Those cuts were strong ammunition for Republicans in the 2010 congressional midterm elections when the GOP recaptured the House and in the 2012 presidential contest. In a recent flurry of letters to the administration, both Democrats and Republicans have expressed concerns about the impending cuts.

Republicans wasted no time Friday criticizing the proposed cuts. “The hard truth is now apparent – millions of seniors who rely on the Medicare Advantage program will lose the plans, benefits, doctors and financial protection they currently have,”  said Rep. Dave Camp, R-Mich., chairman of the House Ways and Means Committee.

Sen. Orrin Hatch, R-Utah, the ranking Republican on the Senate Finance Committee, said the proposed reductions “threaten a successful program for seniors, and must be overturned.  Medicare Advantage is extremely popular for a reason – run through the private market, seniors gain access to high-quality and coordinated care with additional benefits that they otherwise wouldn’t get.  Regrettably, this administration continues to undermine this critical program.”

But others say the payment changes are needed. “The reductions should continue to go into effect in order to ensure more parity between [Medicare Advantage] plans and traditional Medicare with respect to how much is spent on beneficiaries,” the Center for Medicare Advocacy wrote Thursday.

The costs of plans – and the additional benefits they may offer — vary widely around the country.  Insurers UnitedHealthcare and Humana make up more than 40 percent of Medicare Advantage enrollees.

Last year, Medicare officials initially proposed reducing Medicare Advantage payments by 2.2 percent, but after another strong industry lobbying campaign, the administration switched gears and raised the rate by 3.3 percent, although an AHIP analysis found the combined effect of other factors in the health law combined to produce a 6 percent rate cut in 2014.

Some analysts predict the Obama administration again will be under intense political pressure to moderate the proposed 2015 payment rates when they are finalized in April.

“Seniors make up a higher percentage of voters in non-presidential election years than in presidential election years,” said Paul Heldman, senior health policy analyst for Potomac Research Group, a Washington policy analysis firm for institutional investors. “Cuts mean plans may drop out of certain areas or cut certain benefits, which is a political liability for Democrats in tough races.”

The costs of plans – and the additional benefits they may offer — vary widely around the country. Insurers UnitedHealthcare and Humana make up more than 40 percent of Medicare Advantage enrollees.

AHIP has already begun a grassroots lobbying effort that includes television and print advertisements with seniors reminding members of Congress that they are a potent voting bloc. The group also funded a study that shows the cumulative effect of the expected cuts, coupled with other federal spending reductions,  means that beneficiaries could face premium increases and benefit reductions of $35 to $75 per month, or $420 to $900 if Medicare Advantage payments are reduced by 6 percent in 2015.

Some analysts say it makes no sense to cut payments to a popular program. “Our concern is that if the program is not sustainably funded, it may not be able to keep up with a demand that is only going to increase,” wrote Douglas Holtz-Eakin and Kenneth Thorpe, co-chairs of the Partnership for the Future of Medicare, a bipartisan group that advocates for programs to make Medicare secure.

In their Feb. 11 letter to Centers for Medicare & Medicaid Services Administrator Marilyn Tavenner, Eakin and Thorpe  also wrote “our fear is that additional cuts to the [Medicare Advantage] program in 2015 could mean that millions of [Medicare Advantage] beneficiaries will lose access to their preferred health plans and doctors and drive more beneficiaries into the flawed fee-for-service system.”

Holtz-Eakin is a former director of the Congressional Budget Office who now heads the American Action Forum, a right-leaning think tank.  Thorpe is chairman of the Partnership to Fight Chronic Disease and chairs the Department of Health Policy & Management at Emory University.  During the Clinton administration, Thorpe was deputy assistant secretary for health policy at the Department of Health and Human Services.

Final Medicare Advantage payment rates for 2015 are scheduled to be released April 7.