Three Boston-area health insurers are in a race for a decisive competitive advantage. They’re not seeking the usual industry plaudits, exclusive deals with high-profile medical providers, or splashy marketing campaigns. 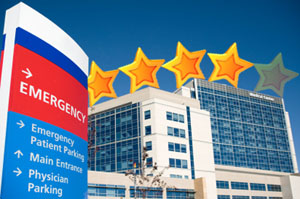 They’re after the highest mark on Medicare’s quality exam, a one-to-five star rating system that was an afterthought until the 2010 health law tied it to big cash bonuses.  The Medicare Advantage plans’ latest ratings for 2012 will be released Wednesday. Top scoring plans will also win the ability to enroll new members year-round, rather than a few weeks each autumn.

“It’s a huge game changer in Massachusetts,” said Ken Arruda, executive director of Medicare services for Blue Cross Blue Shield of Massachusetts, which currently has 4.5 stars. Also in the Boston area, Fallon Community Health Plan and Tufts Health Plan are on the cusp of the top score. Each says their strategy is to reach five stars as soon as possible –a feat only three plans nationwide have achieved so far.

Competition is fiercest in places like Boston, where high-ranking plans are near their goal, but shades of this quality arms race are visible throughout the country. Insurers have rarely competed on quality measures, but as the federal government prepares to unleash an estimated $3 billion to $4 billion next year in bonus payments, the industry is following the money. Star-ratings are bleeding into bottom lines, board meetings, and corporate strategy as the insurers chase top scores.

Wednesday’s announcement comes just ahead of the open enrollment period which runs from Oct. 15 through Dec. 7. About one quarter of Medicare beneficiaries are now in private plans that contract with the federal government to provide health benefits to seniors and disabled people.

The star ratings have been on the books since 2007 and are the only guide to health plan performance available to consumers. Next year, though, is the first in which there is money at stake for the companies.

“[T]o say that the [private plans] put less than optimal resources toward star quality ratings in the past would be an understatement,” wrote Barclays Capital analyst Joshua Raskin. Now, he said by e-mail, he sees a “clear effort on improving the ratings at most companies.”

The federal health law cut $136 billion in payments to Medicare Advantage plans over 10 years, and health plan accountants increasingly see the new star-rating bonuses as a way to mitigate the losses.

The Obama administration has argued that the private plans, originally devised as a way to reduce Medicare costs, have long been overpaid. They cost the government as much as 114 percent of the cost of traditional Medicare patients, without producing better health outcomes for enrollees. The federal government announced in November that it would increase the bonuses. The program is part of a push for quality, led by Medicare administrator Dr. Donald Berwick, that is meant to boost results even as the cuts kick in.

Consumer advocates, such as Ilene Stein, the Medicare Rights Center’s federal policy director, are hopeful that the ratings will improve quality for Medicare beneficiaries. However, Stein cautioned, the Medicare agency will need to oversee the bonus system so health plans don’t game the measures.

Beginning in January, plans with three stars – the average rating – or better, will get bonuses of 3 to 5 percent of their total Medicare payments.  The ratings are based on 36 measures, ranging from diabetes care to the volume of consumer complaints. Twenty-two insurers across the country now boast a 4.5 star rating. Of 396 plans that received 2011 scores, only three achieved five stars: one each in Colorado, Florida and Wisconsin.

Attention to the ratings is new even to the top performers. At Marshfield Clinic’s 5-star Security Health Plan in Wisconsin, the plan’s top administrative officer, Steve Youso, described the high score as a natural byproduct of the insurer’s culture of quality.

But, now executives there are paying attention, too, knowing the top rating is worth keeping. “Prior to March 2010” – when the health law passed – “[ratings were] probably not a topic of discussion,” Youso said. Now, “our senior executive team is talking about this on a weekly basis.”

There’s a similar dynamic at Massachusetts’s Fallon Community Health Plan, which is still gunning for five stars. “The finance department is more interested in our [quality] results than ever before,” said Ann Marie Sciammacco, vice-president of health services. “Basically, the stars equate to dollars.”

In Worcester County, the hub of Fallon’s service area, five-star plans would earn $8 a month more than 4.5 star plans for a typical member, according to Medicare data. For Fallon’s 28,000 members there, it would add up to $2.7 million a year – money that could be used to reduce premiums and attract more customers.

Sometimes boosting ratings is simple work. One measure the government tracks is the rate of colorectal cancer screening for certain patients. Fallon members get a birthday card from their insurance company that reads, “Every nine minutes, someone in the U.S. dies from colorectal cancer.” Eighty-four percent of Fallon patients get the screening.

Fallon – or a rival plan in the Boston-area – could also benefit from the year-round enrollment perk, which would allow a five-star plan to pick off its competitor’s members.  “The primary – but untested in this market – competitive advantage of being five stars… is the ability to enroll year round,” said Richard Burke, Fallon’s president of senior care services, in an e-mail.

Nationally, lower ranking insurers, such as the publicly traded HealthSpring, which runs mostly three-star plans, view star ratings as a crucial ingredient to boosting revenues and competing more effectively. Jason Feuerman, a top HealthSpring executive, said in an April interview, “We’re putting the resources in place to make sure we can drive those ratings.”

During a visit that month to a HealthSpring-operated clinic in Philadelphia, administrator Nathaniel Decker pointed out equipment, such as a digital retinal camera, that he said was installed to help boost star ratings by allowing doctors to easily perform one of the tasks measured: eye exams for diabetic patients.

In addition to missing out on the bonuses, plans that consistently score less than three stars could eventually be booted from the program altogether under a proposed regulation released early this month by the Medicare agency.

Plans’ interest in boosting ratings is widespread enough to fuel a niche consulting business. The consulting arm of OptumInsight, a subsidiary of UnitedHealth Group, for instance, says it has picked up 35 health plan clients seeking star-related services. “As soon as you start attaching some money to it, it’s amazing,” said Steve Wood, an Optum management consultant.

In some markets, the star ratings could boost underdogs. Houston-based KelseyCare Advantage, a Medicare plan affiliated with the Kelsey-Seybold Clinic, is on the cusp of a five-star rating. In membership, though, it trails TexanPlus, a Medicare plan operated by the publicly-traded Universal American Corporation, that has 50,000 members – twice as many as KelseyCare. But TexanPlus has only 3.5 stars this year.

KelseyCare President Marnie Matheny is hoping to achieve five stars – and a marketing edge that could level the playing field with a competitor who can do things like rent out the Reliant Center for a Wii bowling tournament to attract customers.

“It will be huge for us,” said Matheny. When patients see “there’s no one else in the market [with five stars], they’ll think there’s something special about KelseyCare.”