Dorathy Senay’s doctor had some bad news after her last checkup, but it wasn’t about her serious blood disorder called amyloidosis. Her Medicare Advantage managed care plan from UnitedHealthcare/AARP is terminating the doctor’s contract Feb. 1.

She is also losing her oncologist at the prestigious Yale Medical Group — the entire 1,200 physician practice was axed.

Senay, 71, of Canterbury, Conn., is among thousands of UnitedHealthcare Medicare members in 10 states whose doctors will be cut from their plan network.

The company is the largest Medicare Advantage insurer in the country, with nearly 3 million members.  More than 14 million older or disabled Americans are enrolled in Medicare Advantage plans, an alternative to traditional Medicare that offers medical and usually drug coverage but members have to use the plan’s network of providers. 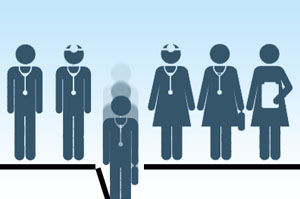 “I have a rare incurable disease and these doctors have saved my life,” said Senay.  “I am in good hands and I will not change doctors.”

UnitedHealthcare has begun telling members about the network changes. But there is now less than two weeks before the Dec. 7 deadline for choosing new coverage next year. Timing is crucial since once they sign up, most Advantage beneficiaries are locked into their plans for the year.  Losing a doctor does not constitute an exception to the rule. Insurers can drop providers any time with 30 days advance notice to members.

Several medical associations are encouraging doctors to appeal the cancelations, which could make it more difficult for seniors to choose a plan in the time remaining.  Neither Medicare, which oversees the Advantage plans, nor UnitedHealthcare would disclose how many providers will be dropped.

The American Medical Association and 39 state affiliates along with 42 medical specialty and patient advocacy groups have urged Medicare chief Marilyn Tavenner to extend the enrollment deadline and require insurers to reinstate the doctors for another year. Medicare has told the Connecticut attorney general that it will not postpone the deadline.

UnitedHealthcare spokeswoman Jessica Pappas said in a written response to questions, “While these changes can be difficult for patients and their doctors, they are necessary to meet rising quality standards, slow the increase in health costs and sustain our plans in an era of Medicare Advantage funding cuts.” However, the doctors dropped from Medicare Advantage plans can still treat patients covered under other UnitedHealthcare policies.

The Affordable Care Act phases in reductions in government payments to Medicare Advantage plans — $156 billion over 10 years — to bring the program into line with the costs of caring for seniors in traditional Medicare.

Medicare officials review the private plans every year to make sure they comply with network adequacy and other requirements, but the agency did not approve the reconfigured networks resulting from the new provider cancelations. Spokesman Raymond Thorn said the agency “is currently reviewing UHC and other plans’ provider networks and closely monitoring all areas that have experienced disruptions to ensure that beneficiaries have full, transparent and timely information and access to needed care.”

While Medicare officials would not disclose how many provider terminations they are scrutinizing, state medical groups have provided some tips for investigators.

The cancelations include most of the orthopedic surgeons in Dayton, the only hand specialty practice serving the Cincinnati area, a large gastroenterology practice with 2,500 patients that also provides most of the inpatient care at five Cincinnati area hospitals, and the largest practice of retina specialists serving 600 UnitedHealthcare members, many with macular degeneration, in central and southern Ohio.

In Connecticut, UnitedHealthcare is terminating about 2,250 physicians, including 810 specialists, Feb. 1, said Mark Thompson, executive director of the Fairfield County Medical Association, prompting the medical associations in Fairfield and Hartford counties to file a federal lawsuit to stop the cancelations.

In New York City, UnitedHealthcare’s contracts with about 2,100 physicians will be canceled, affecting some 8,000 patients, according to the Medical Society of New York.

In Florida, UnitedHealthcare has dropped the state’s only National Cancer Institute-designated cancer treatment facility, the Moffitt Cancer Center and its 250 physicians in Tampa.

Senay was able to find another Advantage plan that includes her doctors, with the help of Tammy Harris, a Medicare counselor with CHOICES, Connecticut’s senior health insurance information program.

Harris said not everyone will be so lucky. Elderly patients worry about traveling long distances to reach new ones, she said.

“If they have to drive to New Haven,” she said, “it’s like going to the moon.”