Medicare has begun tracking the outcomes of hip and knee replacement surgeries, identifying 95 hospitals where elderly patients were more likely to suffer significant setbacks. The government also named 97 hospitals where patients tended to have the smoothest recoveries.

The analysis, which was released last week, is the latest part of the government’s push to improve quality at the nation’s hospitals instead of simply paying Medicare patients’ bills. Medicare already assesses hospital death rates, how consistently hospitals follow basic medical guidelines and how patients rate their stays.  The evaluation of hip and knee surgery outcomes is significant because for the first time, Medicare is rating hospitals’ performance on two common elective procedures. 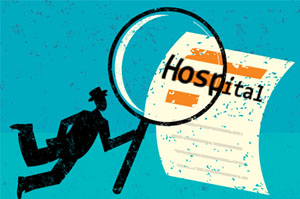 ?Many patients needing joint replacements want to know a hospital’s record when choosing where to have the procedure done.  This is not usually the case for treatment of conditions Medicare has evaluated previously, such as heart attacks.

Some of those hospitals complained Monday that Medicare’s assessments were outdated since they covered operations between July 2009 through June 2012. A spokeswoman for Shannon Medical Center said the hospital has improved since then, adding better technology and opening a clinic to follow up with patients seven days after leaving.  A spokeswoman for Southside Regional Medical Center said that hospital adopted a new treatment model in 2012 for joint and spine patients and that their outcomes have “drastically improved.”

Medicare was cautious in how it marked hospitals, only categorizing them as outliers when their records in hip and knee replacements were statistically different from the national average. The overwhelming majority of hospitals—about 19 out of 20—were branded average, a Kaiser Health News analysis found.

About 600,000 patients in the traditional Medicare program have their hips or knees replaced each year. The growing popularity of these operations has made them a more significant expense for Medicare and private insurers. In 2010, there were 719,000 knee replacements costing nearly $12 billion and 332,000 hip replacements nearly $8 billion, according to the National Center for Health Statistics.

Medicare published the new outcomes data on its Hospital Compare website.  While few consumers use that site, this information may reach a greater audience later on through groups and publications, such as Consumer Reports, that tap Medicare’s data in devising their own hospital ratings.

“With elective procedures, consumers like to do a lot of research to pick the right doctor and the right hospital, so this is a good first step,” said Leah Binder, CEO of the Leapfrog Group, a nonprofit funded by employers that judges hospital quality. However, she said the new ratings would be of limited use for most patients because the Centers for Medicare & Medicaid Services judged most hospitals’ performance as normal.

“We know there’s a significant variation among hospitals, but CMS reports them all as average,” Binder said.

Hospitals may soon feel a financial pinch from the evaluations. Medicare plans to add hip and knee readmission rates to the criteria it uses when deciding whether to penalize hospitals each year.

Since October, Medicare has been paying less than it normally does to 2,225 hospitals after determining their rates of rebounds for patients with pneumonia, heart attacks and heart failure were too high, even by a small amount.  Starting in the fall of 2014, when the joint replacements are to be factored into the penalty program, hospitals are at risk of losing as much as 3 percent of Medicare payments for each patient stay.

In its new evaluation of hip and knee replacement patients, Medicare used two measures. One was how often the patients ended up being readmitted to the hospital within 30 days of discharge.  The other was how often they suffered one of eight complications after the operation.  Those included a heart attack, pneumonia, sepsis or shock within seven days of admission. They also included bleeding at the site of the surgery, a blood clot in the lung or death within a month of admission. Medicare also counted mechanical complications with implants and infections of the joint or wound within 90 days of admission.

The quality of joint implants has been under scrutiny for several years. Some of the surgical devices have been plagued by quality problems, especially among artificial hips made of interlocking metal parts.  The friction created by these joints can create metal debris that damages the surrounding flesh and bone. Two manufacturers have recalled their devices since 2010.

Nationwide, the number of readmissions following hip and knee replacement surgeries has been dropping, but not as quickly as readmission rates for heart attack, heart failure or pneumonia patients, according to a Medicare-commissioned study by the Yale New Haven Health Services Corporation Center for Outcomes Research and Evaluation.

Dr. Eric Coleman, an expert on readmissions at the University of Colorado Anschutz Medical Campus, said some hospitals are trying to prevent joint replacement patients from returning by educating them ahead of the surgeries about how to take care of themselves and warning signs of problems. This program provides “a chance to walk you through what to expect, what your family would expect, how to arrange your home,” Coleman said. “In most of the cases of readmission reductions, we’re still very reactive.”

Hospitals’ clientele appears to play some role in how they fared after these surgeries. The outcomes for hip and knee replacements tend to be slightly worse for hospitals that serve a high proportion of Medicaid patients, according to the Yale study. The study also found that hospitals where more than one out of every five patients were African-American tended to have slightly higher complication and readmission rates than did hospitals with no black Medicare patients. However, the report noted, some of these hospitals serving large numbers of Medicaid or black patients also performed very well.

These kind of racial and economic disparities in readmissions have long troubled health policy experts. Some hospitals mostly cater to prosperous patients  who have the money, resources and education to get necessary post-surgical care after discharge. But safety net hospitals often have a harder time ensuring that low-income, less educated people follow the often complex instructions about how to recover from a major surgery or hospitalization.

In Medicare’s new analysis, on average, hip and knee patients had a 5.4 percent chance of having to return to the hospital. Nationally, the average complication rate for patients after hip and knee replacement surgery was 3.4 percent. One hospital, Beaumont Health System in Royal Oak, Mich., had a mixed record: Patients there were more likely to be readmitted but less likely to suffer serious complications.

The government also last week released its first ratings of how often Medicare patients of all diagnoses returned to hospitals within 30 days. That “all cause” measure is more encompassing than Medicare’s appraisals based on heart attack, heart failure and pneumonia.  A number of prominent experts, including Congress’ Medicare Payment Advisory Commission, have been pushing for this measure to be used in setting financial penalties for hospitals.

Medicare’s analysis found that 16 percent of Medicare patients ended up returning to a hospital within 30 days between July 2011 through June 2012. Again rates varied significantly. At 364 hospitals, or 8 percent, patients were more likely than average to return within a month, the data show. These included the Cleveland Clinic, as well as the clinic’s hospital in Weston, Fla.; both of Johns Hopkins’s hospitals in Baltimore; and New York-Presbyterian Hospital in Manhattan.

Medicare did not count cases where the patient was scheduled to return to the hospital, such as when a lung cancer patient was admitted for pneumonia and later came back for a chemotherapy treatment that had been planned. Medicare calculated that patients were less likely than average to end up back for any reason at 315 hospitals, or 7 percent of the nation’s total.

Nancy Foster, an executive with the American Hospital Association, said that tracking hospital-wide readmissions was of limited value to hospitals that wanted to do better. “Most of the interventions you would use are built and targeted around particular conditions,” she said. “You have to know what’s driving patients back into the hospital to address the problem. When you get this lump of all-cause readmissions, you don’t know what to go after.”