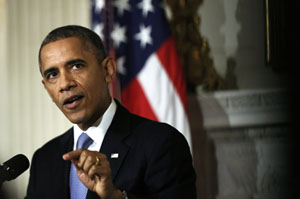 In remarks Thursday, the president called for a new era of bipartisan cooperation on Capitol Hill. “To all my friends in Congress, understand that how business is done in this town has to change,” the president said. He noted that the nation’s fiscal challenges are the “long-term obligations that we have around things like Medicare and Social Security.  We want to make sure those are there for future generations. “

In a joint statement, Murray and Ryan pledged to work together to find a way around the automatic spending cuts known as “sequestration” now governing federal spending. “We hope we can reduce the deficit in a smarter way. We hope to restore stability to the budget process and end the lurching from crisis to crisis,” they said.

Medicare currently accounts for 16 percent of the federal budget, a share that will grow as more baby boomers age into the program. About 50 million elderly and disabled beneficiaries now receive benefits through the program. Enrollment is expected to hit 80 million by 2030, so the program is bound to be a major part of the panel’s deliberations.

Both parties have agreed on some Medicare changes, including asking wealthier beneficiaries to pay more for their coverage. They disagree on others, such as increasing the Medicare eligibility age. Democrats won’t agree to any major overhaul of Medicare unless Republicans agree to raise taxes, which they have rejected.

The following ideas are expected to be part of any Medicare discussion.

Wealthier Beneficiaries Pay More for Medicare: Many Republicans – including Ryan — and Democrats support this. Current law already requires individuals whose incomes are $85,000 and above ($170,000 and above for couples) to pay a larger share of Medicare Part B (outpatient services including doctor visits and laboratory services) and Part D (prescription drugs) premiums. While most beneficiaries now pay 25 percent of Part B premiums, higher-income beneficiaries pay between 35 to 80 percent, depending on income.

Obama’s fiscal 2014 budget proposal would increase the range of premiums for higher income beneficiaries to between 40 percent and 90 percent. His plan would also freeze the income thresholds for those higher premiums until a quarter of beneficiaries paid them, the result of inflation pushing more recipients into those income levels.

That means individuals whose incomes are more modest would pay more for Medicare. In a 2012 analysis, the Kaiser Family Foundation found that if the proposal had been implemented that year, individuals with incomes at or above $47,000 ($94,000 for couples) would be paying higher premiums. (KHN is an editorially independent program of the foundation.)

Medigap Changes: Both sides may also agree to discourage the use of “first-dollar” Medicare supplemental policies. The thought is that more generous Medigap plans encourage overuse of services, but seniors rely on these plans to shield them from unanticipated costs.

Starting in 2017, the president’s budget plan would require new beneficiaries who purchase more generous Medigap plans to face a surcharge of approximately 15 percent of the average Medigap premium.

Ryan and other Republicans have expressed support. In an Oct. 8 op-ed in the Wall Street Journal, Ryan said Medigap premiums could be overhauled “to encourage efficiency and reduce costs.”

Higher Beneficiary Cost Sharing: Obama’s plan includes a higher Part B deductible for those enrolling in 2017 and thereafter as well as a new copayment for home health services. Republicans may show interest as well.

The administration says these changes would “strengthen program financing.” Seniors’ advocates say it’s an additional cost to people already struggling on fixed incomes. In 2012, nearly half of Medicare beneficiaries had annual incomes below $22,500.

Premium Support/Higher Eligibility Age: No bipartisan consensus here. Ryan’s fiscal 2014 budget plan includes both a gradual increase of the Medicare eligibility age (from 65 to 67) as well as a “premium support” plan that would give beneficiaries a set amount of money to select coverage from private plans featured on a Medicare “exchange” that would include the traditional Medicare program as well as private plans.

The changes would apply only to individuals now 54 and younger when they entered Medicare. House Republicans have backed the proposals, as did 2012 GOP presidential Nominee Mitt Romney who picked Ryan as his running mate. Both ideas are non-starters with Democrats.

Provider Cuts: When Congress needs to reduce Medicare spending, it often lowers reimbursements to the hospitals and other providers that care for Medicare beneficiaries. Providers are already facing more than $700 billion of cuts from the 2010 health care law plus an additional 2 percent as part of ongoing automatic spending cuts known as “sequestration.” Providers will balk at more cuts.

Obama’s fiscal 2014 plan calls for additional Medicare cuts, including amounts paid to hospitals for “bad debt” and graduate medical education. Negotiators will also be looking for ways to avoid a scheduled 25 percent cut in Medicare physician payments scheduled for Jan. 1 unless Congress intervenes. This annual battle over the “doc fix” stems from a 1997 payment formula lawmakers now agree is broken beyond repair.

Drug Rebates: The biggest chunk of savings in the president’s budget — $123 billion over a decade – will probably never survive the discussions. The proposal would alter drug costs for approximately 11 million low-income Medicare beneficiaries, about 9 million of whom are known as “dual eligibles” because they qualify for both Medicare and Medicaid.

Duals used to get drug coverage from Medicaid, the shared federal-state health insurance program for the poor and disabled. And drug makers returned part of the cost of drugs for those beneficiaries to Medicaid as rebates, just they do now for current Medicaid beneficiaries.

The Pharmaceutical Research and Manufacturers of America has said the rebate proposal would increase beneficiary premiums and copays. And the industry has plenty of support from Republicans and Democrats to help defeat any proposals to increase drug rebates.

Analysts don’t downplay the task ahead but also say that what Washington and the country have been through in the last few weeks may motivate lawmakers to get something done.

“We are coming into this time where both sides were really bruised by this battle – clearly the Republicans were worse off than the Democrats, but neither of them fared well,” said Dan Mendelson, the chief executive officer of the consulting firm Avalere Health who oversaw health programs at the Office of Management and Budget during the Clinton administration. “They have punted more than they have resolved. And both sides know they have to get their act together. I’ve never seen there really be more of a direct motivation to actually get something done.”