CARMICHAEL, Calif. – When Republican Rep. Dan Lungren faced a crowd of tea party supporters and Democratic detractors at a recent town hall meeting here, the arguments showed how explosive the Medicare debate can get in the hottest races in the country. 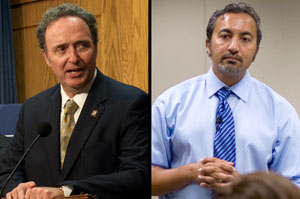 At La Sierra Community Center, the long line of seemingly irritated constituents made clear just what is on the minds of voters here: the Republican proposal to give future beneficiaries, those 55 and younger, a fixed amount of money to buy Medicare coverage from the government or private insurance companies.

Standing at a podium in the auditorium, Margie Metzler, a 67-year old woman with the group Seniors Against Lungren, told Lungren that she had been laid off at age 61 and went four years without health insurance until she qualified for Medicare. “I don’t want to kick the people under 55 under the bus,” Metzler said of Rep. Paul Ryan’s Medicare plan.

A few moments later, another woman took to the microphone with this reprimand: “All you protestors can think about is where your next government entitlement is going to come from. Rome is burning and you’re all acting like children.”

And those were the polite exchanges.

Eastern Sacramento is where the two Californias come together, where the liberal, urban coast meets the conservative exurbs and rural farmland. Lungren has had a safe seat in Congress in large part due to the district’s Republican majority.

But following the 2010 census, an independent state commission redrew the district’s boundaries, resulting in an even split, with each party having 39 percent of registered voters. And with Lungren facing a challenge from Dr. Ami Bera, a local physician running against him for the second time, this patch of California has emerged as a test case as to how potent the fight over Medicare — and health care in general – will be in the 2012 election cycle.

“Lungren and Bera are very effective stand-ins for the two sides of the national debate,” said Dan Schnur, director of the Jesse M. Unruh Institute of Politics at the University of Southern California.

For his part, Lungren spent much of the town hall explaining the Republican position, saying that Medicare would be modeled after the health program for federal employees, relying on private insurance companies to negotiate lower costs with medical providers. “No one will be denied Medicare,” Lungren told the standing room only crowd.

After the meeting, Jack Harris, 82, and Doreen Gant, 72, of Carmichael said they were convinced Lungren was on the right side of history. Harris, a Medicare beneficiary who shuffled slowly out of the auditorium with the aid of a walker, said, “Ryan is realistic.”

Democrats, from President Barack Obama to incumbent members of Congress, cast themselves as a buffer against a Republican-sponsored, post-Medicare apocalypse. In recent weeks, many Democrats have seemingly shed their trepidations about supporting Obama’s signature domestic policy achievement, the Affordable Care Act.

But Bera has been championing that message for the last two years.

In local television advertisements and “senior-to-senior” phone banks, Bera has been eager to tout the law’s benefits and remind voters here, where unemployment hovers near 11 percent, what they would lose if the law was repealed. Parents could no longer keep their children on their health insurance policies until age 26, he tells them; insurance companies could once again charge women higher premiums than men; and preventive care would cost more.

“We’ve started to move forward and build off what’s good,” said Bera. “For me, the next step is to address the cost of care.”

Bera was a newcomer to politics in 2010 when he ran a surprisingly strong campaign against Lungren, losing by 7 percentage points in a year in which Republicans made record gains in the House. But in this year’s rematch, Bera is placing greater emphasis on his medical background: he served as chief medical officer for a large California hospital chain and later in the Sacramento County public health department, tasked with providing medical care for some 225,000 uninsured people.

“As a doctor, I’ve sat with patients who have had to choose which prescriptions they could afford to fill,” said Bera during an interview at his Elk Grove, Calif., campaign headquarters. “I understand how important closing the doughnut hole is,” he said, referring to a provision in the federal health law that reduces out-of-pocket prescription drug costs for some Medicare beneficiaries.

Some health policy analysts have wondered why many Democrats have waited so long to start explaining the law to voters.

“If supporters of the Affordable Care Act would take this issue head on then I think they could change public opinion,” said Henry Aaron, a senior fellow of economic studies at the Brookings Institution. “There’s a lot of misunderstanding of what the act does and how it would affect the lives of most Americans.”

That strategy could prove successful in a statewide campaign in California – a recent Field Poll found that 54 percent of registered voters support the Affordable Care Act while 37 percent oppose it. But here in eastern Sacramento County, it is a riskier tactic, where roughly one in five voters in the newly drawn 7th congressional district identify as independent voters.

Schnur, a veteran of Sen. John McCain’s presidential bid, says it’s unlikely the fulminating over Medicare and the federal health law will appeal to many of California’s independents. “Congressional candidates use the issue to motivate their own party’s base,” he said. “They’re not using it as an issue to attract swing voters.”

As of mid-September, polls show a tight race, despite major spending on both sides by independent committees. The Democratic Congressional Campaign Committee has listed the district at the top of its “Red to Blue” target list, and the American Action Network, a conservative political advocacy group, has sponsored pro-Lungren mailers telling seniors that Lungren “is fighting to protect Medicare for California seniors.”

That hasn’t stopped Bera supporter Bob Ireland, a 75-year-old retiree and Medicare beneficiary, from trying to persuade some of his contemporaries to vote for the Democrat. At a recent senior-to-senior phone bank at Bera’s campaign headquarters, Ireland spoke from personal experience as he tried to sell them on his candidate, telling them the benefits of the Affordable Care Act that he’s received as a senior on Medicare.

“I just had an annual physical,” Ireland said on a recent call, “and I didn’t pay a cent.”