Starting Dec. 1, people with ALS – a disease that impairs motor function so people often can’t talk or even move – could lose access to technological advances that allow them to better communicate, thanks to a federal review of what Medicare is allowed to cover.

ALS, which stands for amyotrophic lateral sclerosis, hit the national spotlight this summer with the viral “Ice Bucket Challenge.” But while public awareness about the disease soared, Medicare changes that could curtail coverage of communication tools were – by “sheer dumb luck” – already in the works, said Kathleen Holt, associate director at the Center for Medicare Advocacy.

Now, though it’s difficult to say for certain if the summer’s attention has enhanced their efforts, one thing is clear: Patient advocates have begun shoring up arguments to push back against the impending change, Holt said.

Historically, Medicare has covered 80 percent of the cost for basic speech-generation devices – the machines many ALS patients use – while permitting patients to pay out of pocket for upgrades that allow the devices to connect to the internet and perform services such as opening doors. But in February, the Centers for Medicare & Medicaid Services posted a “coverage reminder” making clear that the program does not cover the cost of upgradable devices, based on a much earlier national coverage determination.

“We don’t see any reason why Medicare should turn the clock back to 2000, just because technology has evolved,” said Patrick Wildman, director of public policy at the ALS Association.

This notice is part of a review by Medicare contractors to make sure devices do in fact “comply with our coverage rules and the Medicare law,” CMS spokesperson Aaron Albright wrote in an email. This review, he added, has been “suspended” until December to address advocates’ concerns. ALS groups have said the change will effectively bar patients from the machines they have been able to obtain through Medicare for years. “Now all of a sudden the door is closing for them,” Holt said.

A basic speech-generation device costs around $4,000. But as patients purchase additions to the machine – such as eye-tracking technology, often used by patients who have lost movement in their limbs – the total price tag can end up reaching $15,000 or more. Typically, Medicare covers about 3,000 devices a year.

Following the new interpretation, ALS patients insured through Medicare can no longer use the program to buy devices that could potentially be connected to the internet – often the only way ALS patients communicate with people not in the room – or that perform basic functions such as turning on room lights, Wildman said.

That can endanger patients, Holt said. To illustrate, she told the story of an ALS patient who was sitting alone on his porch when a neighborhood boy started throwing rocks at him. The boy later said he wanted to see if the patient was really paralyzed. Because the patient “didn’t have the capability of the internet or ability to use the phone on his computer” he was unable to signal for help. “He sat there and was just barraged,” Holt added.

The reinterpretation comes on the heels of a federal rule change that took effect last April, reclassifying speech-generation devices so Medicare patients would have to rent them for 13 consecutive months before being allowed to own them. Also, advocates said, Medicare has in recent months begun denying claims to cover eye-tracking technology, which uses patients’ eye movements to input commands in speech devices. It is often the only way “locked-in” patients – that is, those who are conscious but can’t move or talk – can use their machines. 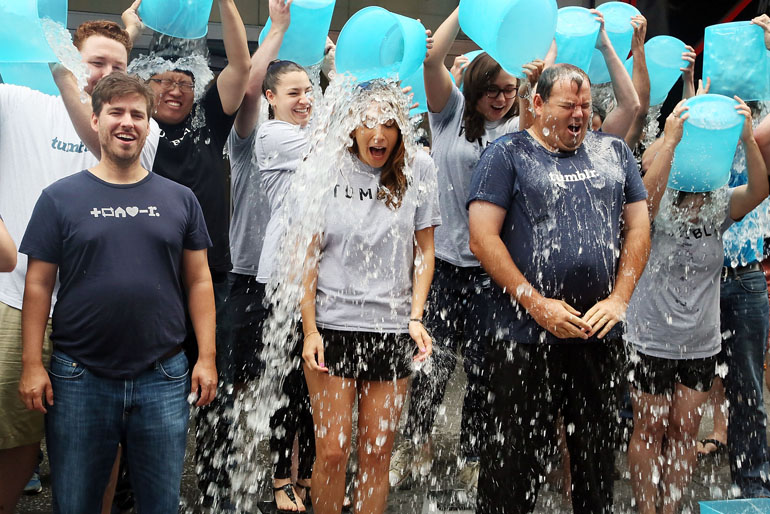 Employees of Tumblr take the ALS Ice Bucket Challenge. Changes to what Medicare covers could mean some patients could go without technological advances used to treat the disease. (Photo by Astrid Stawiarz/Getty Images)

The rental requirement means ALS patients can temporarily lose access to the machine they have been using if they enter a hospital or hospice facility, since Medicare payments for the machines are suspended during that time, Wildman said. Those facilities generally are expected to provide speech devices, but devices often aren’t available or aren’t appropriately customized to match patients’ needs. If patients are released from the facility, the 13-month rental clock then restarts, and patients may not be able to reclaim their customized machines.

This scenario depends on whether manufacturers that stop receiving payments take the next step and take devices away from patients – so far it’s unclear whether or how often suppliers will do so, Wildman said, but the concern it could happen remains pressing.

And the trend of denying coverage for eye-tracking – which is usually reversed on appeal – also delays patients’ access to the technology, Holt said.

Two hundred members of Congress signed onto a “Dear Colleague” letter sent in September to CMS, asking the agency to address concerns about ALS patients’ access to speech generating devices.

CMS has not responded, despite legislators’ request to hear back by Oct. 1, wrote Riva Litman, a spokeswoman for Rep. Cathy McMorris Rodgers, R- Wash. McMorris Rodgers was one the letter’s original authors.

Meanwhile, Holt said CMS hasn’t indicated any immediate plan to address the issue.
The coverage reminder was originally scheduled to take effect Sept. 1.
But unless CMS somehow changes its interpretation by December, the delay doesn’t make much difference, Wildman said.

“Patients aren’t asking Medicare to cover their [devices’ extra] functionality,” Wildman said. “They’re just asking to allow functionality at their own expense – which CMS routinely allows for wheelchairs, for example.”