AMITE, La. — Hood Memorial Hospital is just the kind of health care facility where the federal government hopes to save money. The two-story brick hospital, about an hour north of New Orleans, hasn’t been full in at least two decades, and the yellowing hallways are lined with empty rooms. 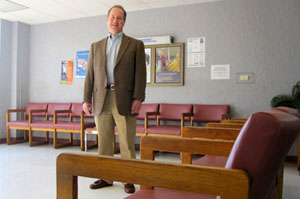 CEO Hoppie Jones says that on an average day, fewer than four of the hospital’s 25 beds are occupied. Jones is a slight man in his 60s, and his face is creased with the stresses of his monumental task: keeping the doors of the hospital open despite losing money 11 out of the past 12 years.

Last year, the hospital had a $700,000 loss on its $7.5 million in total operating expenses, according to data provided by the American Hospital Directory based on the hospital’s Medicare filings.

One of the only bright spots on Jones’ balance sheet is the extra money he receives from the federal government through a program for critical access hospitals —small, rural facilities that receive a higher Medicare reimbursement rate to help keep them afloat. But while Hood is in a small town, it is not geographically isolated: there are at least four other competitor hospitals within a 26 mile radius, including three other critical access facilities.

Listen to the story from NPR:

In the ongoing deficit reduction talks, critical access hospitals have been singled out at least twice as a program ripe for cutting: in President Barack Obama’s budget proposal and by the Congressional Budget Office.

The critical access program was created by Congress in 1997, after a wave of rural hospitals closures, to make sure Americans in isolated areas would still have access to health care. Hospitals with 25 or fewer beds that are at least 35 miles away from another facility, or 15 miles across secondary roads to account for difficult terrain such as mountains, rivers or snow, can qualify. The Medicare Payment Advisory Commission (MedPAC) estimates that in 2003, Medicare paid hospitals in the program an average of $850,000 more than the agency otherwise would have.

But there was also a loophole: states could waive the distance requirement and designate small hospitals considered “necessary providers” as critical access hospitals as well, even if they were close to other facilities. Governors were eager to provide their small, struggling facilities with extra federal dollars, and the program spread quickly until more than 1,300 — nearly one in four acute care hospitals — had been designated as critical access facilities. The federal government “was asleep at the switch” and simply let too many hospitals into the program, explains John Sheehan, a hospital Medicare consultant with BKD in St. Louis, Mo.

The growth of the program slowed in 2006, when Congress eliminated the exception, but hospitals like Hood that had already been given the designation were grandfathered. President Barack Obama’s budget proposal recommends narrowing the definition of a critical access hospital to exclude those that are within 10 miles of another hospital – a move that has the potential to change the status of 61 hospitals, saving $4 billion.

Forty-one percent of hospitals in the program are already losing money, according to the National Rural Health Association, and the loss of funding could mean they will close. While some of these facilities may be redundant, closing any hospital, even one that is often empty, is painful for a community and can leave some rural Americans struggling to access care. 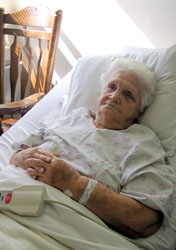 Shirley Holden, 78, was an inpatient at Hood for a week in November while being treated for dehydration. Holden has been coming to Hood since it first opened in 1971 and argues that seniors in Amite need a hospital in town because “a lot of us just can’t afford to hire someone to take us to another hospital, and all of our families work.”  If the hospital closed, she says, “mostly I’d stay at home. I would not be going to North Oaks or anywhere else unless I went on a stretcher.”

When Holden started visiting Hood, it was a thriving full-service hospital that delivered babies, performed surgeries and had 45 inpatient beds. But the specialists who used to work at the hospital moved away to work for larger facilities.

Hood shrank to 25 beds and became a short-term acute care hospital. In 2003, it was designated by the government as a critical access hospital, which Jones says has allowed the hospital to stay in business. The old operating rooms are now used to store extra beds and old incubators. Patients in need of specialty care, including labor and delivery, are transferred to nearby facilities. 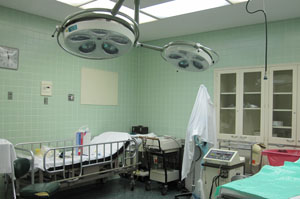 “Our function is to stabilize patients and send them out,” explains Jones. “One of the best things we ever did was build a heliport.”

Lallie Kemp Medical Center is just eight miles away, but it’s another critical access hospital with limited service options.  While the presence of this smaller facility could be what costs Hood its extra funding under the president’s plan, North Oaks Medical Center 22 miles away has proven to be the bigger threat to Hood’s financial stability.

North Oaks is a sprawling 60-acre medical campus in Hammond, La., which, compared to Amite, is a growing metropolis. The hospital has over 2,400 employees, including 200 physicians, compared to Hood’s 115 employees and six physicians. North Oaks’ parking lot is packed with cars, and the emergency room is over capacity, with extra beds lining the hallways to make room for more patients.

Last year, North Oaks maintained a healthy profit margin of 2.9 percent. They’re in the midst of a $200 million construction project that will add another 79 new beds and 14 new operating suites.

Patients who are stabilized at Hood and Lallie Kemp are often sent to North Oaks by ambulance or helicopter for more extensive services.  But patients can also be taken directly to North Oaks in a matter of minutes.

“If they’re having a heart attack, they’re not going to stop at a local smaller hospital without an open heart program or a cath lab,” says Michele Sutton, executive vice president at North Oaks. “They’re going to come straight here.”  Sutton says that while having Hood and Lallie Kemp handle outpatient and acute care visits helps North Oaks handle their large patient load, “with our addition, we could accommodate them.”

Gail Wilensky, former administrator of Medicare and Medicaid, says that while the critical access program remains valuable and should not be eliminated, it needs to be trimmed back because of hospitals like Hood. “What started out as a reasonable concept has morphed into a program that is providing funds to a financially stressed group of hospitals that are not, in any reasonable sense of the term, critically needed to stabilize care for their community.”  Some hospitals in the program like Hood, Wilensky adds, are already being ignored by their community.

When Joe Polotzola, who owns a pottery shop in Amite, recently needed medical testing, he went straight to North Oaks, though Hood offers outpatient diagnostic services. “I wouldn’t go to one of the hospitals around here if you killed me,” he says, though he would make an exception for small injuries. “If you break your finger and go to Hood, they will definitely put a splint on it. But do they have a doctor there ready to set the injury if it needs a pin in it? Probably not,” he explains.

But for others in the community, the loss of Hood Memorial Hospital could prove problematic. Rachel Gonzales, who owns a children’s boutique across the street from the pottery shop, is the mother of three young children who are frequent visitors to the Hood emergency department. She lives in the small community of Wilmer about 20 minutes away, and Hood is her closest hospital. 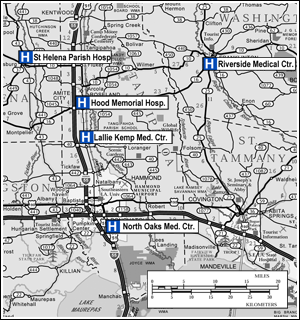 “When my little boy busted his head open, I knew he just needed a few stitches,” she says. “That’s a 20-minute car ride that I was compressing rags on the back of his head to stop the bleeding. If Hood weren’t there, I would have had to drive 45 minutes to North Oaks, which would have been a big problem.”

Jones worries in particular about low-income and elderly patients, who may not have the means to travel to another hospital.  “I see people if not every day then every week who probably would not be walking the streets today if were not for this facility,” says Jones. “We save many lives.”

Eric Zimmerman, a health care lawyer and lobbyist who represents small rural hospitals at McDermott Will & Emery in Washington D.C., says the proposed cuts to hospitals like Hood could be devastating to small communities like Amite. A small hospital is often one of the biggest employers in a rural town, and closures “can have an outsized economic impact.”

But a recent study in the Journal of the American Medical Association found that hospitals in the critical access program tend to provide lower quality care than other hospitals. They are also less financially efficient than other facilities, according to a 2010 study published in the Journal of Health Politics, Policy and Law, because they are paid based on their total cost and do not have as much of an incentive to achieve savings.

Study author Michael D. Rosko, a professor at Widener University in Pennsylvania, says that perhaps of greater concern, “the longer hospitals stayed in the critical access hospital program, the more inefficient they became. Those in the program for seven years were twice as inefficient as those in for one year.”

But Rosko adds that the savings to the government of cutting the program may be disappointing. The longer driving time for patients may delay necessary care, resulting in patients being sicker when they arrive at the hospital. “Some of the savings may be negated by the need for more health care,” he explains.

Even if Hood can keep its critical access funding, however, Hoppie Jones says the hospital may close its doors. His problems are myriad.

“Down in our area of the country and dealing with hurricanes, they always talk about Katrina being that perfect storm, where five to seven different things came together at once to make it so devastating,” he explains. “I kind of see that as what’s going on in the hospital. It’s not any one thing—it’s the uninsured, our inability to collect payments from patients, it’s the tightening up of the funding on the federal and state side. It’s a lot of variables, and all of them right now are working against us.”