Bette Davis, who had breast cancer and suffered a series of strokes before her death in 1989 at age 81, famously remarked that old age is not for sissies. 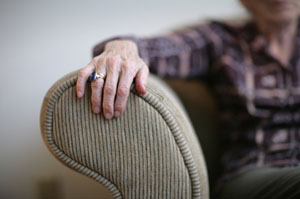 Many people assume that as health problems multiply and loved ones die, it’s inevitable that the elderly become depressed. Not true, say experts. Older people have lower rates of depression than younger groups.

But depression often goes undiagnosed in the elderly, who feel the stigma of mental illness more acutely than younger people and are often less likely to seek help. At the same time, older people are more likely to have multiple chronic conditions that consume their primary-care provider’s attention in the limited time available during a typical office visit.

The situation may be changing. In October, Medicare began to cover annual depression screening in primary-care settings with no cost sharing for beneficiaries.

Paying doctors to screen for depression — Medicare’s going rate is $17.36 per person — may well increase how often they do it, say experts. “Doctors are trying to do the right thing, but how do you prioritize what to do in 21 minutes with a complex person?” asks Ken Duckworth, medical director for the National Alliance on Mental Illness, http://www.nami.org/ an advocacy group. “If they get paid for it, they structure it into their practices.”

Medicare covers 60 percent of the treatment for mental health problems, including depression. (Under a 2008 law, that figure is scheduled to rise to 80 percent in 2014.)

Most primary-care practices that screen for depression use a tool called the patient health questionnaire. The PHQ-9, as it’s called, asks people to describe how frequently during the past two weeks they have felt down or hopeless or taken little interest or pleasure in doing things. It also asks about sleep patterns, appetite and concentration, among other things. Although the test can be taken in just a few minutes, a 2001 study indicated it identifies depression and pinpoints its severity nearly 90 percent of the time.

Nearly 17 percent of people will have a major depressive disorder during their lifetimes, according to 2007 data from the National Comorbidity Survey of mental health disorders. For people 60 and older, however, the lifetime prevalence is much lower, 10.7 percent. “It’s the survivor factor,” says Michael Friedman, an adjunct associate professor at Columbia University’s schools of social work and public health. “You’re more likely to die young if you have depression.”

The lower figures don’t tell the whole story, say experts. Older people are much more likely to suffer from chronic conditions such as diabetes and heart disease, which can complicate diagnosis and treatment of both depression and other medical problems.

“Depression worsens the effect of other illnesses,” says Charles Nemeroff, a geriatric psychiatrist at the University of Miami. “People with depression are more vulnerable to [disease], and once it happens, it’s worse.”

People with depression often don’t take very good care of themselves. They don’t exercise or eat right. They don’t take their medications or get their blood work done to make sure their blood pressure, blood sugar and cholesterol levels are under control. And people with multiple chronic conditions probably take multiple medications that may interact with each other.

In addition, diabetes and heart disease can actually cause a late-life form of depression called vascular depression, which may occur when blood vessels harden, reducing blood flow to the brain.

All of these factors present a challenge for primary-care providers. There’s no point in screening for depression, after all, if you don’t have the resources to help people get the treatment they need.

Mental health experts point to a model called collaborative care as one that has shown good results. In one trial conducted at 14 primary-care clinics in Washington state, patients who had poorly controlled diabetes and/or heart disease as well as depression received help from a nurse to improve their efforts to control their diseases over a 12-month period. The nurse worked closely with a psychiatrist, primary-care physician and psychologist to track patient progress and adjust medications as necessary.

Patients who received the intensive team approach showed significantly more improvement in both their depression and other medical conditions compared with patients who received usual care, according to a study published in the New England Journal of Medicine in December 2010 about the trial. Lead author Wayne Katon, a professor of psychiatry at the University of Washington School of Medicine, said the clinics saved an average of $600 per patient over a two-year period.

But as policymakers and insurers increasingly offer incentives to primary care physicians to transform their practices into medical homes for their patients and reward providers for better disease control rather than simply running tests and doing procedures, the landscape should change.

Depressed people are more likely to receive diagnoses and be treated in primary-care settings than elsewhere. Research shows that elderly people, in fact, prefer to deal with their primary-care provider on mental health issues. In that context, coverage of depression screening may help more Medicare beneficiaries get the help they need.