Twenty thousand physicians in four Midwest states received a glimpse into their financial future last month. Landing in their e-mail inboxes were links to reports from Medicare showing the amount their patients cost on average as well as the quality of the care they provided. The reports also showed how Medicare spending on each doctor’s patients compared to their local peers in Kansas, Iowa, Missouri and Nebraska. 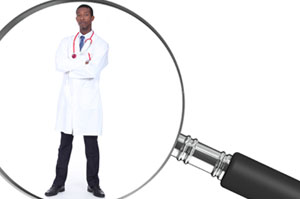 The “resource use” reports, which Medicare plans to eventually provide to doctors nationwide, are one of the most visible phases of the government’s effort to figure out how to enact a complex, delicate and little-noticed provision of the 2010 health care law: paying more to doctors who provide quality care at lower cost to Medicare, and reducing payments to physicians who run up Medicare’s costs without better results.

Making providers routinely pay attention to cost and quality is widely viewed as crucial if the country is going to rein in its health care spending, which amounts to more than $2.5 trillion a year. It’s also key to keeping Medicare solvent. Efforts have already begun to change the way Medicare pays hospitals, physicians and other providers who agree to work together in new alliances known as “accountable care organizations.” This fall, the federal health program for 47 million seniors and disabled people also is adjusting hospital payments based on quality of care, and it plans to take cost into account as early as next year.

But applying these same precepts to doctors is much more difficult, experts agree. Doctors see far fewer patients than do hospitals, so making statistically accurate assessments of doctors’ care is much harder. Comparing specialists is tricky, since some focus on particular kinds of patients that tend to be more costly.

Plus, properly assessing how a doctor affects costs must include not just the specific services she directly provides, but also care other providers may give, either because the patient was referred to them or because the original doctor didn’t take the right preventive steps to avoid more expensive treatments later on. And without properly adjusting for patients’ health problems, paying bonuses to physicians who use fewer Medicare resources might encourage doctors to stint on care or shun patients with expensive-to-treat ailments.

“It may be the most difficult measurement challenge in the whole world of value-based purchasing,” said Dr. Donald Berwick, the former administrator of the federal Centers for Medicare & Medicaid Services, or CMS. “We do have to be cautious in this case. It could lead to levels of gaming and misunderstanding and incorrect signals to physicians that might not be best for everyone.”

Dr. Michael Kitchell, a neurologist and chairman of the board at the McFarland Clinic in Ames, Iowa, one of the state’s biggest multi-specialist practices, predicted the Medicare reports “will be a huge surprise to almost every physician.” That’s because the calculations of how much those doctors’ patients cost Medicare include not just the services of the individual doctor but of all the doctors that provided any treatment to the patient. Kitchell said his own patients saw on average 13 other physicians besides himself.

“You’re a victim or a beneficiary of your medical neighborhood,” Kitchell said. “If the primary care doctors are doing the preventative screening tests, you’ll get credit for that, but if you’re in a community where the community doctors are doing a poor job, you’re going to look bad.”

Medicare officials are trying to refine the way they judge doctors as they follow the health care law’s directive to phase in the new payment system, called a Physician Value-Based Payment Modifier, starting in 2015. It will initially apply only to physician groups and some specialists selected by the government, but by 2017 the payment change is supposed to apply to most if not all doctors.

The assessment “is a very important change we’re putting into place, one where we’re going to need a lot of feedback and deliberation,” said Jonathan Blum, CMS’s deputy administrator. “We’re not blind to the challenges that are coming toward us.”

Although the program is still being devised, it will become reality for many doctors starting in January, because CMS plans to base the 2015 bonuses or penalties on what happens to a doctor’s patients during 2013.

As the nation’s biggest insurer, Medicare’s adoption of this approach would be “a game changer” in terms of making physicians directly accountable for costs, said Anders Gilberg, senior vice president at the Medical Group Management Association, which represents physicians groups. Medicare is “going to be shifting money from … physicians who are deemed to be high cost relative to their peers to low-cost physicians. That’s going to create all kinds of new incentives in fee-for-service.”

Private insurers may follow Medicare’s lead, said Paul Ginsburg, president of the Center for Studying Health System Change, a Washington think tank. The formula Medicare ultimately designs to judge and pay doctors, Ginsburg said, could become “a valuable asset for private insurers, with a tool that will be somewhat bulletproof, that physicians won’t attack because they’ve been part of the process of developing them.”

But getting physician support may not be so easy, said Margaret O’Kane, president of the National Committee for Quality Assurance, a nonprofit in Washington. “Doctors are a very powerful political segment,” she said. In addition, she added, “Patients are not behind this agenda. The public is very scared about managing costs.”

In the reports, Medicare measures the average payments it made for each doctor’s patients, as well as subgroups of patients with common chronic conditions, such as chronic obstructive pulmonary disease, diabetes and heart failure. Medicare adjusts the costs to take into account differences in patients’ age, gender, poverty and history of medical conditions.

For the resource reports, CMS has come up with a preliminary method to determine how central a role a doctor played in a patient’s care. If a doctor was responsible for at least 35 percent of a patient’s evaluation and management services, they are presumed to have “directed” the beneficiary’s care. If they didn’t direct the care but accounted for at least 20 percent of the physician fees billed for the beneficiary, they are considered to have “influenced” the care. And if they did less than that, they are considered to have “contributed” to the care.

But that method is widely considered so crude that few expect CMS will ultimately use it in payment. CMS is trying to develop more refined methods to compare physicians’ parsimony or extravagance with Medicare dollars using software programs called “episode groupers.” These programs determine the combined cost for all the services—including doctors, labs, hospitals and pharmaceuticals—that were used to treat a distinct medical situation, such as urinary tract infection or hypertension attack, over a set period of time.

Initially, Medicare attempted to use existing programs devised by commercial insurers but found they didn’t work with Medicare data, according to a report from the General Accounting Office. “It is not clear that all the problems identified with the commercial groupers can be solved by a Medicare specific grouper and the timeline for its development is challenging,” the report said.

Dana Gelb Safran, who oversees quality measurement for Blue Cross Blue Shield of Massachusetts, says she doubts it will be possible for the government to judge individual doctors. She predicts CMS will ultimately have to find ways to evaluate doctors as parts of groups- either formal affiliations as part of group practices or informal affiliations among doctors who refer to each other.

“There really are very few measures that we can reliably evaluate on the individual doctor level,” she said. “When they move forward with the value-based modifier, there is going to have to somehow allow physicians to identify other physicians with whom they say they practice and who they say they share clinical risk for performance.”

Medicare To Tie Doctors’ Pay To Quality, Cost Of Care