Seniors have until the end of the year to switch Medicare drug plans to get a better deal. But many will pass up the chance to save hundreds of dollars a year in prescription costs.

The reason: With dozens of drug plans on the market, many seniors get overwhelmed at the prospect of changing plans, even if a different one would better suit their needs and lower their costs. But with the average premium for a Medicare drug plan increasing 11 percent in 2010, consumer advocates say seniors have even more reason to check out the options and consider their costs.

Robert Lowenstein, a 91-year-old retired Washington attorney, chose a UnitedHealthcare-AARP drug plan in 2006, when the stand-alone policies first became available. He trusted AARP, which was UnitedHealthcare’s marketing partner, and has stuck with the policy because he figured changing would be confusing and time-consuming. But a look at the “Prescription Drug Plan Finder” on Medicare’s Web site indicates that Lowenstein would save about $400 a year by selecting a different UnitedHealthcare plan or a policy offered by CVS Caremark. Similarly, his wife, Elizabeth, 82, would save $450 a year by switching from her UnitedHealthcare plan, reducing their drug costs by more than 20 percent.

Only an average of 7 percent of the 17 million seniors on Medicare drug plans switch plans each year, according to the Centers for Medicare and Medicaid Services, the federal agency that runs Medicare. Experts on Medicare say this suggests that millions of beneficiaries could be paying more than they should for their drug coverage.

Molly Schuchat, 81, a District resident who has been with the same Blue Cross and Blue Shield drug plan since 2006, said, “I know I could probably do better, but it’s what I’m used to, and it’s a hassle to change.” Yet, according to the Medicare Web site, Schuchat could save as much as $744, about 20 percent of her costs, by changing plans next year.

The Medicare drug benefit was created by Congress in 2003 to help those seniors — one in four at the time — who didn’t have prescription-drug coverage. Rather than giving all seniors the same coverage, Congress decided to have private companies offer the benefit through competing plans. As a result, insurers offer different levels of coverage for different drugs. Some experts say the competition has held down costs, but some seniors — and their children — say the wide array of plans can be daunting, making it unnerving or too perplexing to change.

Medicare’s easy-to-use “plan finder” allows seniors to plug in their medications and see which plan would have the lowest overall annual costs. But many seniors are uncomfortable going online or unable to use computers to sort through the different policies. Last year, only 688,000 seniors, or 2.5 percent, went online to enroll in Medicare drug or health plans. The rest did it the old-fashioned way: by telephone or letter. 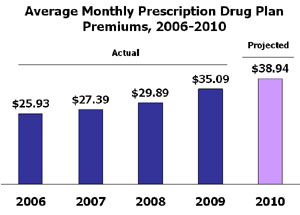 Source: Georgetown/NORC analysis of Centers for Medicaid and Medicare Services data, 2006-2010, for the Kaiser Family Foundation. Note: Average premiums are weighted by enrollment in each year (2009 enrollment used for 2010 weighting). Excludes Part D plans in the territories and Medicare Advantage plan participants.

To help seniors choose a plan, Howard Houghton, a coordinator at the Virginia Insurance Counseling and Assistance Program in Fairfax, visits senior centers and retirement communities with his laptop computer. Many seniors, he said, think that once they join a drug plan, they should stick with it for the rest of their lives. He said that’s partly because they generally stayed with the same private health insurance plan for many years before enrolling in Medicare.

“But with these drug plans, you really do have to do your homework each year,” he said. Some seniors, he added, have begun to reconsider their options in response to the latest premium increases and the faltering economy, but many have not.

Federal officials wonder why even more Medicare beneficiaries aren’t switching. “We do see some degree of hesitation from our beneficiaries to change plans or go to the best optimal plan,” said Jonathan Blum, acting director of the CMS Center for Drug and Health Plan Choice. This year, the agency is doing more to reach out to seniors directly, including sending letters to the 6.5 million low-income seniors across the nation who are eligible for reduced rates to make sure they are in drug plans that don’t charge a monthly premium.

Lydia Baker, a coordinator of the federally funded State Health Insurance Counseling and Assistance Program in Tucson, Ariz., said many seniors choose a plan initially because they recognize the name of the company or are attracted by low premiums. 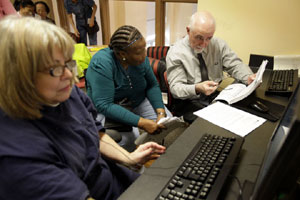 Baker, who is on Medicare herself, said many seniors find the prospect of changing plans frightening. “If they found something and think it’s working they don’t want to move,” she said.

The price for such inaction will get higher next year as the average monthly premium for a Medicare drug plan rises to $38.85 a month. That’s 50 percent more than seniors paid in 2006.

The average premium for the most popular drug plan — UnitedHealthcare’s AARP Medicare RX Preferred, which has nearly 3 million customers — has jumped 50 percent to $39.39 in 2010 from $26.31 in 2006, according to the Kaiser Family Foundation. (Kaiser Health News is a part of the foundation.) The average premium for Humana’s PDP Enhanced, the second most popular plan with 1.6 million customers — will be $41.53 next year, 182 percent higher than in 2006. The actual premiums vary by state.

For some seniors, these premium increases will be unavoidable. But others could save substantial amounts of money by checking out a variety of plans.

Geoffrey Joyce, a senior economist at the Rand Corp., a nonprofit think tank based in Santa Monica, Calif., said health plans benefit from seniors’ fear of changing plans. “If they feel like they have them locked in, they can raise prices and get away with it,” he said. Humana officials say it is inaccurate to suggest that they initially offered artificially low prices on their plans in a bid to grab market share. They say they have had to raise prices to reflect the increased costs of providing the coverage.

The large health insurers that sell drug plans say that seniors don’t switch plans because they’re satisfied with their coverage. “Many [Medicare] Part D members are extremely or very satisfied with the Medicare prescription plan in which they’re currently enrolled,” said Jonathan Stone, a spokesman for Minnetonka, Minn.-based UnitedHealthcare. The company, the nation’s largest private health insurer, has the largest number of Medicare drug members, about 4.3 million seniors, or about 25 percent of the market.

In figuring out their prospective drug costs, seniors need to look beyond premiums and also consider deductibles and co-payments, which can vary by drug. In addition, they also have to consider whether they want to pay more in premiums to have some coverage in the Medicare program’s coverage gap, commonly called the “doughnut hole.” In 2010, this lapse in coverage will begin after an enrollee incurs $2,830 in total drug spending and end when an enrollee has spent a total of $4,550 out of pocket. After that, beneficiaries are responsible for just 5 percent of their drug costs.

The Democrats’ health-care overhaul bills in the House and the Senate could have a major impact on the Medicare prescription-drug program. The House bill would close the gap in coverage by 2019, although the Senate bill wouldn’t. Under both bills, starting in 2010, beneficiaries would be able to buy brand-name drugs for half price once they’re in the coverage gap. The annual enrollment period would also be moved up a month to start in mid-October.

Meanwhile, the Lowensteins are considering changing plans. “I definitely think Robert should change plans and so should I,” said Elizabeth Lowenstein.