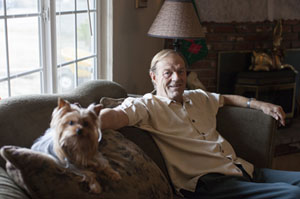 Sam Lewis, 65, had triple bypass surgery in late November. Just days before, when he first qualified for Medicare coverage, a checkup discovered three of his arteries were clogged with plaque (Photo by Alison Yin/For KHN).

The day after his birthday in October, when he qualified for Medicare, Lewis got a checkup. Days later, he went under the knife: open-heart surgery, a triple-bypass, three arteries blocked with plaque, one of them, 99 percent. “If I’d had to wait until 67 for Medicare,” Lewis said, “I’d be dead.”

A proposal to raise the Medicare eligibility age from 65 to 67 to ratchet down spending is one of the more explosive ideas in the fiscal talks between House Speaker John Boehner and the White House. The negotiations are aimed at a deficit deal to avert automatic tax increases and spending cuts slated to take effect Jan. 1.  Liberal Democrats say they loathe the Medicare proposal, but the White House has not taken a public position on it.

President Barack Obama was open to a similar proposal last year during his failed effort to reach a “grand bargain” with Republicans.  And many expect it to pop up again in next year’s discussions about curbing entitlement costs if it is not included in this year’s deal.

Whatever the politics, those approaching retirement are responding with anger and fear, while employers see themselves stuck holding the bag on long-ago social commitments made by the federal government.

“All they’re doing is shoving the cost onto the backs of business,” said Don Marks, president of Uesco Industries in Alsip, Ill., a family-owned company that assembles overhead cranes and hoists used in manufacturing plants.

Uesco employs 45 people and pays some medical expenses of retirees that are not picked up by Medicare. With no set retirement age, the company would pay health insurance costs for older, likely sicker workers who might no longer retire at 65 because they would not be eligible for Medicare. 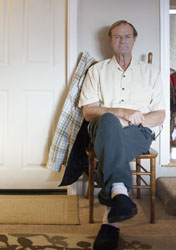 In his business, Marks sees little good coming from that. “We are a heavy metal manufacturer,” he said. “It’s big and heavy pieces of steel that we move around, that we grind, that we weld, that we cut with torches. It’s heavy labor. The older (the workers) get, the more it costs for health insurance. And we have an aging workforce.”

Kevin Kelly, CEO at Emerald Packaging in Union City, Calif., is also unhappy about the proposal. “I don’t think the government or legislators are thinking about the impact this will have on business,” he said.

Emerald employs 225 workers to manufacture plastic bags for produce sold at grocery stores — five of them between the ages of 63 and 65.

Kelly figures it would cost him an extra $120,000 annually to pay for health insurance for those five workers for another two years. “It comes right out of profit,” he said. “It’s not like I can raise prices because the government decided not to cover people between 65 and 67. If I try to pass the cost to the retailers, it just gives them one more reason to look to China.”

Proponents of the idea such as Gail Wilensky, who oversaw Medicare and Medicaid for the first President George Bush, say people are living longer than when the program was enacted in 1965 and it’s important to raise the eligibility age gradually to change younger Americans’ perceptions about what they can expect from entitlement programs.

“What we need is to try to find ways to try to encourage people to participate in the labor force longer, and not only for our sake but for their sake as well,” Wilensky said at a forum this week, noting the number of beneficiaries is expected to double over the next two decades as Baby Boomers retire.

The Congressional Budget Office estimates the potential net savings to the federal government from gradually raising the eligibility age to 67 beginning in 2014 at approximately $113 billion over 10 years, as older workers remain in the work force longer, and pay Medicare taxes while giving up benefits for two more years.

But cost shifting to workers and employers would increase out-of-pocket costs for 65- and 66-year-olds by $3.7 billion a year and boost employers’ health care costs by $4.5 billion, according to a 2011 analysis by the Kaiser Family Foundation (Kaiser Health News is an editorially independent program of the foundation).

The potential human toll is harder to figure. Like Sam Lewis says, many in their early sixties who lack insurance are “crossing fingers, walking on tiptoes, and making sure not to break any eggs,” until they turn 65.  Some may not be as lucky as him.

The left-leaning Center for American Progress projects that raising the Medicare age could put up to 435,000 older people at risk of having no insurance at all, even with the protections afforded by the health care law – although the CBO’s estimate is far lower.

The health law changes the equation after 2014 since insurers will no longer be able to refuse applicants because of pre-existing health conditions, or charge older people more than three times what they charge young people.

In addition, the state and federal health insurance marketplaces planned for 2014 will offer subsidies to help those with low-incomes buy health insurance, and states that expand Medicaid will cover single adults.

But will it be enough to tide people over until they qualify for Medicare — especially since some governors say they won’t expand Medicaid and the effect of the exchanges on insurance affordability remains untested?

Realtor Mary Nishiyama, 57, a friend of Lewis, is not confident.  “There is going to be a big wave of us,” she warned.  “Don’t they know our parts aren’t working as well as they used to?”

Nishiyama pays $800 a month for coverage which she buys at group rates through her former employer, Chevron, and has recently started saving in case she has to wait another two years before qualifying for Medicare benefits. “If you don’t have money to put away, how are you going to pay for your health care?”

Even some who consider themselves physically and financially healthy say they’re furious about upending a social contract they’ve spent a lifetime paying into – and expecting to be there for them.

“They’d be pulling the rug out from under us,” said Chuck Hinkle, 56, a gas pipeline electrician in Oak Forest Ill., who points out he’s been paying into Medicare his whole working life.

The fact that increasing health costs are threatening to consume the federal budget, especially as people live longer and millions of Baby Boomers retire, is an abstraction. “I’m still planning to retire at 65,” Hinkle said. “I’m hoping to be in a financial position where I can just cough up the money for those two years.”