To Douglas Holtz-Eakin, one thing is clear: Widening deficits mean that sooner or later both parties will have to take on the politically sacrosanct Medicare program for the elderly and disabled. 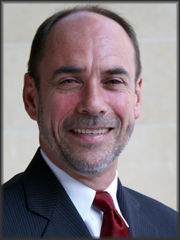 “We’re all going to cut Medicare,” he said in an interview this week with KHN. “Playing the Granny card’s gotta end. The question is how to do it.”

What are your concerns about entitlement programs?

I understand the traditional political arithmetic that says this is the third rail, you can’t do it. But I think that argument has to be reversed. You can’t afford not to fix it. At the heart of this is a spending problem, and at the heart of the spending is entitlements.

If you just cut [payments to doctors and hospitals] and don’t change the system, that’s an empty promise. That’s my problem with the Affordable Care Act. Those cuts aren’t real. It’s really a spending problem.

If you want to overhaul entitlements, where do you start?

Social Security is easiest. Health is bigger numbers and we know that, but it’s all intertwined with the [health care law]. The president has put a political firewall on that.

That’s one of the greatest disservices of the act. It paralyzes real entitlement reform for a period, at least until after 2012.

If Republicans win big in the next election, what happens to the health law and entitlement spending?

If Republicans take the Senate in 2012, then here we go, if they take the White House, [the health law] is gone.

I think it’s a no-brainer to say we simply have to put [entitlements] on a budget. If nothing else, let’s say we have a budget for Medicare and Medicaid. And a good way to budget in Medicaid is in fact to give a fixed grant, a block grant, to the states. That limits taxpayer exposure.

You [also] favor the idea of “premium support” for Medicare, where beneficiaries receive a fixed amount from the government for their coverage. But there’s more to overhauling entitlements than setting a budget cap, right?

Fundamentally, what we have in all our health programs is the following: We say to beneficiaries, you can have all the highest quality medical science that we can provide. And we say to [medical] providers, ‘God, that’s expensive! Stop it!’ And we cut back their payments or tell them not to do stuff. Then the beneficiary says, ‘But you said,’ and we go back and give it to them. It’s incoherent.

Some proposals would exclude anyone 55 and older from entitlement changes. Do you think that’s a good idea?

Should higher-income people pay more for their Medicare?

Making high-income folks pay more in premiums [makes sense]. The idea that we have these things 75 percent subsidized out of general revenuesis crazy.

The health care law reduces federal payments to the Medicare Advantage program, which provides private insurance to about a quarter of Medicare beneficiaries. Democrats said the cuts are warranted because these plans cost more than traditional fee for service. You disagree.

We want people in managed plans that have all the elements of care in them. We might not like the way current [Medicare Advantage] plans manage people. It may not be your idea of a medical home, or whatever you want to call it, but it is a vehicle for managing these costs in a comprehensive fashion as opposed to the fee-for-service system.

How will the pressure on entitlement spending affect implementation of the health law?

If you look at this from just a budgetary [standpoint], I really believe these pressures are going to grow enormously, and I think the Affordable Care Act will come under pressure.

I always believed [the law] was a dead man walking from the beginning. It’s going to fall under its own fiscal weight. It has so many bad internal contradictions. I have employer-sponsored insurance I get no help. This identical person doesn’t have employer-sponsored insurance, they [get a subsidy]. The law, I don’t think, can hang together over a long period of time. I think [Republicans] should help topple it faster.