Thought your hospital room was dirty? Did your nurse sometimes ignore you?  If so, the hospital has a new reason to worry: Patient gripes soon will affect how much hospitals get paid by Medicare.

The Centers for Medicare & Medicaid Services is finalizing details for the new reimbursement method, required by last year’s health care law. Consumer advocates say tying patient opinions to payments will result in better care. But many hospital officials are wary, arguing the scores don’t necessarily reflect the quality of the care and are influenced by factors beyond their control.

Medicare has been publishing patient-satisfaction scores on its Hospital Compare website since 2008, but hasn’t used them to adjust payments. Under CMS’s “value-based purchasing“ proposal, Medicare will begin withholding 1 percent of its payments to hospitals starting in October 2012. That money – $850 million in the first year – will go into a pool to be doled out as bonuses to hospitals that score above average on several measures. The agency’s final rule is due out soon. 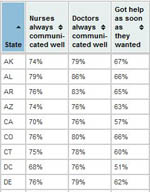 The percentage of patients in each state who rated hospitals positively on each of 10 questions.

Partly linking payments to patient satisfaction may hurt hospitals in regions where patients tend to render less-than-glowing judgments, including the District of Columbia, Maryland, New Jersey and Hawaii. The District and New York State rank at the bottom: 59 percent of patients in both places give their hospital experiences a top rating, lower than anywhere else except the Virgin Islands. Nationally, an average of 67 percent of patients give their hospitals a top rating.

CMS says more than 3,000 hospitals will be affected. Under the proposal, patient scores would determine 30 percent of the bonuses, while clinical measures for basic quality care would set the rest. Hospitals argue the scores should have less weight, but nevertheless are trying to figure out how to improve their rankings.

“These are hard scores to improve, and I think that’s why hospitals get frustrated,” says Dale Shaller, a Minnesota health care researcher who oversees the national patient survey database for the federal government.

No one is sure why hospitals in some regions fare more poorly than those in other parts.  One theory: Hospitals in these regions treat lots of patients with multiple ailments, which is associated with worse reviews. CMS says it adjusts its ratings to take that into account. Teaching hospitals and other large hospitals also get worse patient evaluations than do small community hospitals, some research shows, but CMS doesn’t factor that in.

Hard-to-measure cultural factors also may play a role. Northeasterners, for example, may be harder to please than Midwesterners and southerners. Hospitals in South Dakota, Nebraska, Louisiana and Iowa are at the top of hospital patient reviews, according to Hospital Compare.

“Someone said, ‘Well, people from the East Coast are just grumpier,'” says Edward Goodman, an executive at VHA Inc., a national alliance of nonprofit hospitals. “In some cultures praise is not as predominant.”

Hospitals conduct the surveys of recently discharged people, including those too young to be on Medicare. Questions include whether nurses and doctors always communicated well; whether the patients always received help as soon as they wanted; whether their pain was always well controlled; whether their rooms and bathrooms were clean; whether they got explanations about medications and whether they got directions on what to do after leaving the hospital.

The District of Columbia’s hospitals lag on many of the specific questions. For instance, about two-thirds of recently discharged patients at George Washington University Hospital reported nurses always communicated well. That was 10 percentage points below the national average. At United Medical Center in Southeast, 64 percent of patients said they were given instructions on what to do after leaving the hospital, 18 points below average.

Chris Jordan, director of quality management at George Washington hospital, says his hospital has been improving its patient ratings this year. “I can guarantee you that we’ll get better,” he says.

“We’re not where we ought to be,” says Dennis Hansen, Shady Grove’s president. To improve satisfaction, nurses now check in with patients every hour.

“Because we have such cultural diversity, such literacy variability and such large and very complex hospitals, for us to always hit it out of the park is very difficult,” says Jaclyn Mucaria, a senior vice president at NewYork-Presbyterian. “There’s another theory, that we New Yorkers are very hard to please, whether it’s in a hotel or a restaurant or a hospital. For somebody to really rave about something is an anomaly.”

While many hospitals have been uneasy with the surveys, they’re stepping up the scrutiny about their validity. Dr. James Merlino, chief experience officer of the Cleveland Clinic, which scores below average on seven of nine key patient-satisfaction questions, says doctors and nurses have done their own studies and concluded that very sick and depressed patients give skewed views.  For instance, severely ill patients are less likely to report that nurses check in on them every hour-even when logs prove they did, he says.

But low patient ratings often spring from real shortcomings, says Jodie Cunningham, director of public reporting at Press Ganey, an Indiana-based company that administers the surveys for more than half the nation’s hospitals. She says poor ratings can be caused by bad employee morale or bed shortages that force patients to remain in emergency rooms for hours before being admitted.

“If your nurses are not getting along with the physicians, it definitely shows in lower scores,” says Cunningham.

Consumer advocates, who want CMS to give even greater weight to the patient views, say the payment changes, even if imperfect, will spur improvement.

“There’s always resistance to change,” says Debra Ness, president of the National Partnership for Women & Families, a Washington nonprofit. “If we go at the rate many providers would like us to go, we’ll be having the same conversation in 10 years.”