PICO RIVERA, Calif. – It is usually after the mail arrives that Della Saavedra comes undone.

That’s when she sits in her living room in this struggling Los Angeles suburb and sorts through the latest round of letters from her health plan, each rejecting her appeal to stay with her trusted oncologist at City of Hope, a local cancer center. For as long as she can remember, Saavedra, 53, a former cafeteria worker who suffers from bone marrow cancer, has been insured through Medicaid, the joint federal-state program for low-income people. For most of that time, she could go to any doctor willing to take her, but last year, the state revamped the program and assigned her to a managed care plan with a restricted network of doctors. Her oncologist is not on its roster.

“I have been sick for years and no problem,” says Saavedra. “Now, it’s a huge problem.”

Saavedra is one of a large group of disabled Medicaid enrollees in California who have been moved out of traditional fee-for-service health coverage into a managed care plan. Officials hope to learn if the transition provides this vulnerable population, which has complex medical needs, better medical care while saving the government money. 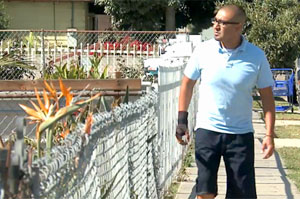 Juan Cameros, a 34 year-old disabled architecture student from South Los Angeles, was shifted from Medi-Cal into a managed care plan.

The California experiment, now in its second year, has national significance. Federal officials have begun to roll out a similar, but larger effort required by the Affordable Care Act. That program will move up to 2 million of the nation’s sickest and most expensive patients into managed care. Twenty-five states have applied to be part of the managed care experiment for so-called “dual-eligibles,” people  who qualify for both Medicare and Medicaid. All dual-eligibles are poor, two-thirds of them are over 65, and many of them suffer from multiple chronic illnesses like diabetes and heart disease.

Massachusetts and Washington, the first states to be approved, will start their programs April 1.

Patient advocates around the country, and some lawmakers in Congress, warn that managed care plans – some run by for-profit, publicly traded companies – are ill-equipped to deal with the complex health needs of those who are elderly, mentally ill or disabled. Advocates are looking closely at the experiences of patients like Saavedra in California to see what the pitfalls of the national program may be.

“We have to think about the fact that people’s lives are at stake,” says Kevin Prindiville, an attorney with the National Senior Citizens Law Center.

Federal and state governments spend nearly $300 billion each year on the medical and home care needs of patients who are enrolled in both Medicaid and Medicare. They account for 31 percent of Medicare’s spending and 39 percent of Medicaid’s spending, according to the Centers for Medicare and Medicaid Services.

“Medicare-Medicaid enrollees include some of the most chronically ill and complex enrollees in both programs,” says Melanie Bella, who is overseeing the experiment as director of the Medicare-Medicaid Coordination Office. “The current system presents many navigational challenges due to complex and often competing requirements.”

The goal is to improve the care of these fragile patients by coordinating it better.  The system could save money by eliminating needless tests, duplicative office visits and too many hospitalizations.

Those are sound principles, but the size of the experiment worries many. “They are too big to fail,” says Robert Berenson, a former vice chairman of the Medicare Payment Advisory Board.

Attorney Vanessa Cajina concurs. She has represented several patients in the California Medicaid managed care experiment in her work with the Western Center on Law and Poverty in Sacramento. “[It’s] too much, too fast, too soon,” says Cajina. A recurring theme, Cajina has identified, is that the health plans did not have the range of specialists in their networks to care for people with complex or rare medical conditions.

But Emma Sandoe, a spokeswoman for CMS, says the upcoming national experiment will have a safety hatch for patients: they will be able to opt out of managed care if they wish.

Berenson and other experts say the opt-out is not sufficient because it’s likely to be too daunting a bureaucratic hurdle for many of these patients. “Fifty percent of duals either have cognitive impairments or serious mental illness. How’s that going to work?” says Berenson.

California’s plan for the federal experiment is by far the largest of all the states applying, with officials proposing to gradually move 685,000 duals into managed care starting next summer. The state predicts the shift will yield $663 million in savings in next year’s budget and additional savings in subsequent years.

Howard Kahn, CEO of L.A. Care, the nation’s largest public health plan with one million members in Los Angeles County, says the effort will allow plans to knit together all the medical care patients receive and root out physicians who are abusing the fee-for-service system. “There’s a whole bunch of really unnecessary care being delivered and worse. Not only unnecessary, but inappropriate and fraudulent care,” Kahn said.

But California’s experience of moving the subset of people on Medicaid with disabilities into managed care has led many to wonder if the federal demonstration project puts the most fragile at too great a risk. A report by the California Health Care Foundation determined the change-over in California was rushed – there were only seven months between federal approval in November 2010 and when mandatory enrollment began. The transition was riddled with problems.

In interviews, insurers and legal advocates say privacy rules prevented the health plans from receiving complete patient records. Patients had difficulty determining if their preferred doctors were in the plans offered to them, and those who wanted to be exempt because of a medical emergency, like active cancer treatment, found the appeals process onerous.

The result has been that many patients are severing decade-long bonds with trusted doctors, while others are being shifted to generic drugs they say are ineffective. Some, like Juan Cameros, a 34 year-old disabled architecture student from South Los Angeles have found themselves in a bureaucratic labyrinth worthy of a Kafka novel. (See accompanying video here.)

“They refer me to [a doctor],” says Cameros, who has a disease that makes his knees swell to the size of grapefruits, requiring a highly specialized surgery. “But he was a specialist on [the] spinal cord. He doesn’t do knees.” Indeed, Cameros, his lawyer says, had been referred three times by his health plan to the same spinal surgeon. An administrative judge recently sided with Cameros allowing him to step out of managed care. But the knee specialist who has operated on Cameros before – and will only accept traditional Medicaid patients – initially said he couldn’t schedule the surgery until more paper work is filed.

Perhaps one of the biggest concerns about the experiment centers on patients who depend on home health and personal care aides to live safely at home.

At a conference in September in Sacramento, Calif. of local and state health directors from around the country, community service providers say the insurance companies that will be contracted under the combined program have little experience overseeing the long-term, home care needs of frail – and in many cases, isolated – patients. Many of the insurers “wouldn’t have had in-home supportive services,” says Steven Wallace, chair of the Department of Community Health Sciences at the UCLA Fielding School of Public Health. This includes patients who need support every week, not just the week they are discharged from the hospital, he says.

Those needs are not all medical. Experts on aging say the “personal care benefit” paid for by Medicaid in many states will now become part of a bundled payment to health insurance companies that are ill equipped to handle to social problems at home that often have more to do with poverty, living conditions and isolation.

Ready For The Challenge

For their part, health plan administrators say they will be ready to meet the needs of their newest members. “Plans are going to be covering services that they haven’t done before,” says Lisa Kodmur, program manager for seniors and people with disabilities at L.A. Care Health Plan. “It doesn’t mean we can’t. It just means we haven’t done it.”

Steven Sample is a 63-year-old Vietnam veteran who lives in a group home in Glendale, Calif., and suffers from a debilitating nervous condition and diabetes. Sample says he loves the attention L.A. Care provides. “My heart was beating really fast the other day, and I called and the nurse said to lay down,” he says. “I would have gone to the emergency room if I didn’t have the advice line.”

As for Della Saavedra, the cancer patient in Pico Rivera, she recently received some good news in the mail: her health plan, L.A. Care, has given her permission to go out of its network of cancer specialists and get treatment from her long-time doctor.

Huge Experiment Aims To Save On Care For Poorest, Sickest Patients