Julie Johnson grew up in Libby, Mont. — a picturesque Rocky Mountain community that was unknowingly poisoned for decades by deadly asbestos from a vermiculite mine six miles from town.

Her grandfather, a miner, her grandmother and an uncle died of asbestos-related disease. Both of her parents have the condition that has no cure. But she didn’t think it would hit her — until doctors last year found a spot on her lung. 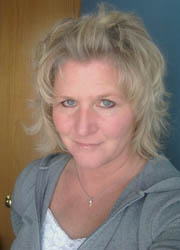 Like many of the nearly 2,000 people from Libby who have asbestos-related disease and the 400 who have died from it, Johnson never worked at the mine, which was owned by chemical manufacturer W.R. Grace. It produced much of the world’s supply of vermiculite, a mineral used in insulation, fireproofing and soil conditioning, before closing in 1990.

But tremolite, a form of asbestos that was laced in the vermiculite ore, had been spread throughout the Libby area. Miners brought it home in heavy dust on their clothes helping to contaminate their families, residents took vermiculite to use for insulation and tailings were spread as ground filler around town, including at school and community sports fields. Federal officials in 2009 declared the area the first national public health emergency and have called it the nation’s worst environmental disaster.

Without health insurance, Johnson, 45, relied on a state-federal grant program and a medical plan funded by W.R. Grace to help pay for her medications and doctor visits. Yet, with Grace in bankruptcy and the grant program scheduled to end this summer, Johnson was concerned about how she was going to keep up with mounting health bills for medicines and tests.

The 2010 federal health law is providing help. One provision, authored by Senate Finance Chairman Max Baucus, D-Mont., gives full Medicare coverage to people who had lived in Libby for a total of at least six months over a 10-year period before their diagnosis of an asbestos-related disease.

“I feel good knowing I have this [coverage] and it’s never going to go away,” said Johnson. She is one of about 600 people from Libby who have signed up for Medicare as a result of the law, according to the Social Security Administration, which oversees the program with the Centers for Medicare and Medicaid Services.

But she and others worry about Republican efforts to repeal the law.

“Losing this benefit would really knock the bottom out of people’s lives,” said Gayla Benefield, a Libby resident and Johnson’s mother.

U.S. Rep. Denny Rehberg, R-Mont., is among those fighting to overturn the law. “It’s tragic that assistance for so many deserving folks up in Libby was tied to the anchor of Obamacare, with all of its mangled policy, unconstitutional mandates and reckless deficits,” he said.

Rehberg, who has announced he is challenging Democratic Sen. Jon Tester and is making the health law an issue in the campaign, said he will continue working to help the people of Libby but would not say if he supports keeping the Medicare option for them.

Baucus defends the coverage for Libby. “This provision is important because it will provide vital medical services to Americans who – through no fault of their own-have suffered horrible effects from their exposure to deadly poisons,” he said.

Expansions Of Medicare Have Been Rare

It is just the third expansion of Medicare eligibility since the federal health insurance program was established for the elderly and disabled in 1965. In 1972, Medicare added people with end-stage kidney disease and in 2001, people with amyotrophic lateral sclerosis, also known as Lou Gehrig’s disease.

Unlike other deals senators secured in the law to help their own states, the Libby provision elicited no public outcry, mostly because of its relatively minor cost. The Congressional Budget Office said it would cost $300 million over the next decade.

For Johnson, being on Medicare means long-term security. Because of the contamination, “W.R. Grace proved that they are not to be trusted and I definitely wasn’t banking on having their medical plan for the rest of my life,” said Johnson who now lives in Kalispell, about 90 miles east of Libby.

Even with the new Medicare coverage, Grace has no plans to close its Libby medical plan, which has paid out about $21 million since 2000 and has about 1,100 current patients, said William Corcoran, a vice president at Grace. About 70 percent of those in the company plan are 65 and older.

Grace, a chemicals manufacturer based in Columbia, Md., that bought the mine in 1963, has been paying medical bills in Libby for years and agreed in 2008 to spend $250 million for an environmental cleanup of the town.  The company, which was driven into bankruptcy protection in 2001 by tens of thousands of asbestos poisoning claims mostly unrelated to Libby, reached a tentative civil settlement in 2008 to pay $3 billion to asbestos victims nationwide.

The federal-state grant program, which serves about 1,400 people, was intended as temporary aid and is slated to end in July.

That program was set up because the Grace medical plan failed to cover everyone who needed help, said Benefield, who also been a leading advocate to get help for the town’s residents. The Grace program hires its own doctors to independently verify if applicants have the type of asbestos-related disease connected to the Libby mine. The government program doesn’t have this independent verification process. Applicants merely have to submit information from their own doctor certifying they had asbestos-related disease.

Both the Grace and the government grant program pay only for health services related to asbestos disease and both supplement an individual’s private insurance. In contrast, the Medicare coverage pays for all types of health needs.

“The Medicare coverage will be extremely important,” said Tanis Hernandez, outreach coordinator of the Center for Asbestos Related Diseases, the government-funded clinic. She said many people have not yet enrolled because they can still get help from the grant program.

Exposure to asbestos is known to cause cancer and other lung diseases. The asbestos-related disease can take decades to show up on X-rays and other tests.

Out of a population of more than 10,000 people in Libby and the surrounding valley, new cases are being diagnosed at a rate of about four a week, according to Hernandez.

“I thought I was fine and I was not a smoker and was least exposed of my siblings,” said Johnson who works as a receptionist at a veterinary clinic. But there were early signs of health problems: She caught pneumonia when she was eight months pregnant, was diagnosed with Swine flu, and in the past few years she developed ear infections that took months to clear.

These days, when she shows her Medicare card at the doctor’s office, Johnson sometimes gets strange looks. “They say, ‘You look so young. How can you be on Medicare?’ Then I explain I’m from Libby.”