Medicare’s release Wednesday of millions of records of payments made to the nation’s doctors comes as the government is looking to find more cost-efficient ways to pay physicians, particularly specialists. 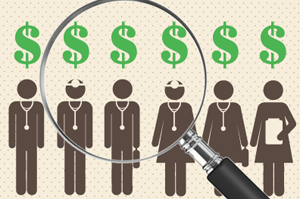 The federal government published data tracing the $77 billion that Medicare paid to physicians, drug testing companies and other medical practitioners throughout 2012, and what services they were being reimbursed for. The data cover 888,000 different practitioners. More than 6,000 procedures are included, and the full database is so large that it requires statistical software to analyze it. While the database provides tantalizing details, showing for instance the huge amount ophthalmologists are paid to treat a common eye disorder, experts cautioned that the data can be easily misunderstood and could lead to some doctors’ incomes being unfairly pilloried.

The release comes 35 years after a court-issued gag order that prevented anyone from revealing Medicare Part B payments to individual doctors, and advocates for more transparency in health care payments heralded the release as a leap forward. “Taxpayers have the right to understand what is being paid for and how it is being paid for,” said Jonathan Blum, principal deputy administrator for the Centers for Medicare & Medicare Services.

He asked for the public to comb through the information to help find waste and fraud and also encouraged researchers to use it to try to determine why spending on health care for the elderly varies so much in different parts of the country. This could replicate on the physician level what the Dartmouth Atlas of Health Care has been doing for decades in showing variances in Medicare’s hospital spending.

“The uses of this data can and will go significantly beyond the identification of fraud, waste and abuse,” said Niall Brennan, the Medicare official who oversaw the development of the database.

The release also comes at a propitious time for the government’s effort to refashion the way America’s health care system is financed. Earlier this year Medicare invited advice on how it should devise new ways of paying specialists to replace the current system, in which doctors are paid a set fee for each visit or procedure. The goal of these approaches is to remove the financial incentive for practitioners to do more services.

Under the authority of the federal health care law, the Obama administration has already launched experimental programs aimed mostly at hospitals and large medical groups. There are hundreds of trial efforts under way to pay medical practitioners a set fee to treat a defined ailment, such as replacing a knee, with the fee covering all aspects of the care from before the operation through the recovery and any setbacks.

Medicare is in the midst of creating a similar program for cancer specialists. In February, the government’s Center for Medicare & Medicaid Innovation invited suggestions on how it should fashion new payment programs that “would be designed to improve the effectiveness and efficiency of specialty care, in part by clarifying the specialist practitioner’s clinical role.” The deadline for ideas and suggestions is Thursday.

Dr. Kavita Patel, a former White House health care expert and a researcher at the Brookings Institution, a Washington-based think tank, said the administration’s timing was not coincidental. “They are building the case for doing targeted specialty payment models,” she said. “The administration is trying to get at the delivery system from all angles.”

Unsurprisingly, medical specialties that rely on expensive drugs, such as oncologists and ophthalmologists, appeared at the top of the list of biggest reimbursements. That’s because in 2012 Medicare pays doctors for the market cost of drugs they use plus 6 percent, Blum said. (That amount has been lowered by the spending cuts imposed by Congress, known as the sequester.)

Despite their size, the Medicare records omit as much important information  as they include. The records do not include any treatments doctors do on non-Medicare patients, such as people on private insurance, Medicaid and those who pay cash. The records also lack any information about roughly a quarter of Medicare beneficiaries who have coverage through Medicare Advantage private insurance plans, and for various experimental payment reforms the government has initiated. The payments for some doctors may be larger than it appears in the data because they also could have billed Medicare through a combined medical practice or other medical organization.

Fred Trotter, a heath care data expert pre-emptively warned reporters and analysts that: “We should be very careful to not draw any conclusions at the low end of the spectrum. That doctor who ‘only’ performed procedure X eleven times? That probably means nothing. What the doctor is actually doing with his/her patients is just not showing up at all.”

Procedures billed to one doctor may actually have been performed by a number of workers in one practice such as medical residents, nurses and physician assistants. A Los Angeles rheumatologist who Medicare paid $5.4 million in 2012 told The Washington Post that about $5 million of that paid for very expensive drugs and the billings also helped cover his staff of 40 people. CMS’ Brennan said that one goal of the release was to encourage each individual medical practitioner to bill Medicare directly, so that the government could get a better handle on spending.

In a note published on the website of the Association of Health Care Journalists, Charles Ornstein, a senior reporter at the investigative nonprofit Pro Publica, cautioned reporters to be careful in interpretation, writing: “Don’t just assume that because a number is large, a doctor has done something wrong.”

In addition, there’s no information about the quality of the care provided, and no information about how sick the  patients were or why a particular procedure was performed. In fact, to ensure that the identity of any patient could not be known, Medicare has only included procedures that each doctor performed at least 11 times.

Large numbers of procedures performed by a doctor may be a good sign. Someone billing a lot might well be a very talented practitioner, since research has found that medical skill tends to improve the more times a physician performs the same operation. In fact, health care experts often encourage patients to choose a doctor based on the volume of cases the physician has done. Alternatively, in some cases—probably a small number—a doctor with lots of billing could be ripping off the system. Several doctors with the biggest Medicare payments are already under investigation for potential fraud, such a Dr. Salomon Melgen, a Florida ophthamologist who The New York Times said was paid $21 million in 2012. His lawyer said Melgen has followed all Medicare rules.

The back story of the gag order on this data stretches back to 1979, when a Florida court issued a permanent injunction barring the government from releasing information about Medicare payments to individual physicians in any manner that would allow the doctor to be identified. In 2011, the parent company of The Wall Street Journal successfully sued to overturn the injunction as the paper prepared a detailed look at Medicare spending.

The American Medical Association complained that physicians were not allowed to review the data for inaccuracies. However, Medicare’s previous release of similar information about hospital payments did not result in reports of any major errors. Brennan pointed out that the data is based on claims medical providers billed to Medicare and were reimbursed for. “We are quite confident this data is accurate,” Brennan said.

Where Can I Find The Data?

If you just want to look up a specific doctors or a few dozen in an area, both the Wall Street Journal and The New York Times have handy interactive look-up tools.

Medicare has published the data files here. Medicare has also put out a technical overview of its methods.