The federal government is penalizing 758 hospitals with higher rates of patient safety incidents, and more than half of those places had also been fined last year, Medicare records released late Wednesday show.

Among the hospitals getting punished for the first time are some well-known institutions, including Stanford Health Care in Northern California, Denver Health Medical Center and two satellite hospitals run by the Mayo Clinic Health System in Minnesota, according to the federal data.

The fines are based on the government’s assessment of the frequency of several kinds of infections, sepsis, hip fractures and other complications. Medicare will lower all its payments to the penalized hospitals by 1 percent over the course of the federal fiscal year, which runs through September 2016. In total, Medicare estimates the penalties will cost hospitals $364 million.

The penalties, created by the 2010 health law, are the toughest sanctions Medicare has taken on hospital safety, and they remain contentious. Patient safety advocates worry the fines are not large enough to alter hospital behavior and that they only examine a small portion of the types of mistakes that take place. Medicare plans to add more types of conditions in future years.

“I think the penalties are important,” said Helen Haskell, a prominent patient advocate. “I think it’s the only thing that gets people’s attention. My concern is the measures stay strong or even be strengthened.”

Hospitals say the penalties are counterproductive and unfairly levied against places that have made progress in safety but have not caught up to most facilities. They are also bothered that the health law requires Medicare to punish a quarter of hospitals each year.

“What bothers me the most is when people are improving and get that penalty, that’s money that could be invested into better care,” said Dr. Mark Jarrett, chief quality officer for the North Shore-LIJ Health System on Long Island, which had several hospitals penalized this year. “Taking the money away, all you’ve done is to make it harder for hospitals to function.”

The penalties are one prong of the health law’s mandate to leverage taxpayer dollars to improve hospital quality. Each year, Medicare also docks the pay of hospitals with too many patients coming back within a month, and it doles out bonuses and penalties to hospitals based on patient satisfaction scores, death rates and other performance measures. 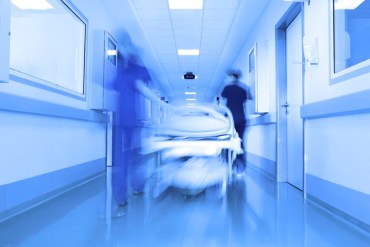 Nonetheless, Medicare payments to most hospitals continue to be based primarily on the number and nature of the services they conduct, a system that health care experts say encourages hospitals to perform more procedures and focus on complex—and lucrative—ones.

“For hospitals, complications are still profitable,” said Dr. Martin Makary, a pancreatic surgeon and researcher at Johns Hopkins Medicine in Baltimore who studies safety. “Much of what we do in health care still has the incentives aligned the wrong way.”

This second round of the Hospital-Acquired Condition Reduction Program was based on the government’s assessment of the frequency in 2013 and 2014 of infections in patients with central lines inserted into veins, urinary catheters and incisions from colon surgeries and hysterectomies. Those infection rates comprise 75 percent of Medicare’s evaluation.

The rest is based on eight other complications, such as surgical tears, collapsed lungs, broken hips and reopened wounds between July 2012 and June 2014. Most of these complications were part of last year’s penalty assessments, but the infections from colon operations and hysterectomies were added to the calculations this year.

In practice, only about one in six hospitals are getting the penalty because Congress exempted veterans hospitals, children’s hospitals and “critical access” hospitals, which are generally the sole providers in their area.

In releasing the numbers, Medicare said average hospital performance improved for two of the three measures that the government relied on for the penalties both last year and this year. Infections from catheters used to collect urine from patients who are not mobile increased slightly over the year.

The HAC penalties have come under criticism by the hospital industry and researchers. A paper in the Journal of the American Medical Association examined the first year of the program and found that the hospitals that were penalized were more likely to have characteristics usually associated with quality. These included accreditation by the Joint Commission, the presence of the most extensive types of trauma centers and more nurses per patient.

Daron Cowley, a spokesman for Intermountain Healthcare in Salt Lake City, said in a statement that the penalty evaluation is “flawed and there are clearly refinements and changes needed.” Intermountain’s flagship hospital in Murray, Utah, has been penalized both years. Cowley said the penalty assessments do not properly consider the “substantial variations in size and number of procedures performed” by different hospitals.

Another paper published in May in The American Journal of Infection Control suggested that while health experts recommend hospitals use urinary catheters as rarely as possible to limit the chance of infections, those same hospitals may look worse because the catheters are mostly used in the sickest patients, who are more prone to infections.

A number of hospitals, such as those run by UCLA Health, have focused on decreasing the use of catheters in response to the penalty program. Both UCLA Medical Center, Santa Monica and Ronald Reagan UCLA Medical Center were penalized this year. Dr. Robert Cherry, chief medical and quality officer of UCLA Health, said in a statement that infection rates decreased this year.

Dr. Brian Whited, vice chair of operations at Mayo, endorsed the penalties even though they were levied against Mayo hospitals in Fairmont and Albert Lea.

“As an organization, we’re not satisfied with these results and understand we have work to do to reduce hospital-acquired conditions,” Whited said in a statement. “We support the objectives of the Hospital-Acquired Condition Reduction Program, and all our practices have been developing improvement strategies and other changes to reduce those conditions.”

Stanford said it had reduced injuries since the end of the period examined in determining the penalties. Dr. Rajneesh Behal, chief quality officer, said in a statement: “It should be noted, the HAC program lags and does not reflect our current performance.”

A total of 407 hospitals were penalized both years of the program. (A full list of all penalized hospitals can be viewed here.)

Dr. Ashish Jha, a Harvard researcher, said the penalties are only based on a fraction of the types of medical problems patients can experience. “The most common cause of problems in hospitals is medication errors, which remain absent from this program,” he said. “Ultimately unless we get to clinically based, validated measures of patient safety, we’re not going to be able to move the needle.”

This story was updated to correct the number of hospitals owned by North Shore-LIJ Health System that are on the list.