As a physician running for Congress in the Philadelphia suburbs, Democrat Manan Trivedi frequently talks about Medicare on the campaign trail. But last week, the dozens of seniors and baby boomers who packed an event wanted to discuss little else. 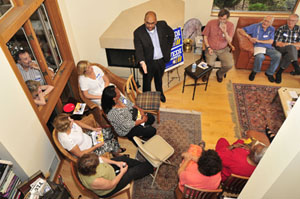 GOP presidential hopeful Mitt Romney’s selection of Wisconsin Republican Paul Ryan as his running mate may have energized the Republican base, but it has also fired up the Democratic faithful who say that Ryan’s proposals to revamp Medicare would end guaranteed health benefits for seniors.

In the week since Romney’s announcement, Medicare has been catapulted from an issue that political strategists said could make a difference in close races to a central component of congressional campaigns nationwide—especially in states like Pennsylvania, Florida, Minnesota and Ohio with large numbers of older voters.

Two-thirds of the 56 most competitive House races are in districts with higher than average numbers of seniors, said David Wasserman, House editor of the Cook Political Report.

“Democrats need to recover among seniors if they have any hope of gaining seats in the House,” he said.

Pennsylvania will be an important test case. It has several close races where Democrats have been hammering Republicans over the Medicare issue, and 18 percent of the state’s population is on Medicare – the same percentage as Florida.

At Trivedi’s event in Exeter, Pa., attendees called out their disapproval when the candidate cited press reports that Republican incumbent Jim Gerlach and Ryan were workout buddies. He also told them that Gerlach had twice voted for Ryan’s legislation to overhaul the health entitlement.

“I’ve heard about how close Jim Gerlach is to Paul Ryan and what that means to Medicare,” one older woman said afterwards. “I’d like to know what can we do to make sure that we don’t have to have that plan?”

Gerlach, too, has gone on the offensive, following advice from national GOP leaders to attack Democrats for supporting the health care law’s reductions in future Medicare spending, and to steer clear of words like privatization.

“My opponent has fallen right in line with ObamaCare, which already gutted over $500 billion from current Medicare recipients,” Gerlach said. “Then, he and his hypocritical Democrat colleagues issue press releases bemoaning Republican efforts to save the program.”

The campaign jockeying over Medicare comes at a time when the program represents a huge fiscal challenge to both parties. With almost 50 million beneficiaries — and growing at the rate of 10,000 baby boomers every day — the entitlement program is one of the fastest-growing portions of the federal budget. Both parties acknowledge the need to curb its growth; both have also used the issue for political gain, casting themselves as the program’s protectors against what they portray as rivals’ threats. 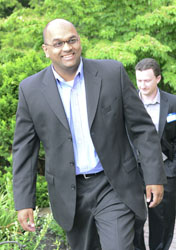 Republicans used the issue of Medicare as one of their primary tools to win control of the House in 2010, claiming that Democratic incumbents had voted to reduce Medicare spending by $500 billion over 10 years to fund the health care law. Although Democrats said they were expanding, rather than cutting seniors’ benefits, and that the bulk of the reductions would come from medical providers and insurers, the argument got little political traction.

Likewise, after the House voted to approve versions of Ryan’s proposals to overhaul the program in 2011 and 2012, Democrats began strategizing about how to use those votes to make a comeback.

Even before Romney announced Ryan as his running mate, Democrats had planned to use the issue against House Republicans who had voted for the plan. While Ryan’s proposal does not affect current seniors, it would provide a set amount of money for those under the age of 55 to purchase either a private health plan, or the traditional government-administered program.

Ryan and his supporters say that competition among private plans and the traditional Medicare plan would drive costs down; Democrats say his blueprint would likely shift costs onto future seniors, noting the stipend would cover the cost of one of the lower-priced plans, but might not be enough to pay for the traditional program.

“The selection of Paul Ryan brings his [Medicare] plan into stark relief,” Trivedi said. “I’ve been talking about Paul Ryan and how bad it is for months, but it’s been hard to get anybody to listen. But now, the Romney campaign has brought that front and center and people are listening.”

Both Sides Ramp Up Arguments

In Pennsylvania, the Democratic Congressional Campaign Committee had targeted Republican incumbents Gerlach, Mike Fitzpatrick, Pat Meehan and Tim Murphy in the sixth, seventh, eighth and eighteenth congressional districts, for their support of the Ryan plan.

Television and radio ads aren’t expected until after Labor Day, but the AFL-CIO is starting automated phone calls and public events this week. Union volunteers were planning to hand out fake Medicare vouchers to argue that seniors would not get enough money from the government to cover the cost of coverage.

Meanwhile, Republicans, including Gerlach, are reviving their 2010 arguments that helped shift seniors’ trust on Medicare from Democrats to Republicans. This is the second time that Trivedi has challenged Gerlach, and Gerlach is reprising the arguments that won him 57 percent of the vote in 2010.

“The Democrats complaining about serious efforts by Republicans to actually save Medicare are both a joke and a disgrace,” Gerlach said. “They self-righteously posture like they care about seniors, but they have never put forth a proposal that will save the program.”

The argument is an even easier sell this time around, Gerlach said in an interview, because the Congressional Budget Office recently revised its original estimate about how much the health law would reduce the growth of Medicare spending.

“They’re cutting $716 billion out of Medicare today for existing seniors,” he said. “Our proposal wouldn’t affect existing seniors. Voters get that, and that’s why it’s an easier issue to talk about than it was two years ago.”

The Ryan proposal assumes the same $716 billion in reductions.

Trivedi supporters at the Exeter event acknowledged they understood very little about Ryan’s Medicare proposals – and some of what they said they knew was inaccurate. Regardless, most said that Medicare was extremely important to them and that it was a top voting issue. Before the end of the evening, many had signed up to make phone calls, stuff envelopes, and do what they could to help defeat Gerlach — and Ryan’s Medicare plan.

“I see [Medicare] as a big issue because next year I’m eligible,” said Nancy Daubert of Spring Township in Berks County. “The idea that Ryan would take the safety net away from so many people is appalling. … They say it will cost me $6,300 more. I don’t know where that comes from, but it’s a big concern for me.”

Anna Greenberg, a Democratic pollster and senior vice president of Greenberg Quinlan Rosner Research, said the Democratic strategy has already proven successful in special elections in Arizona and New York, where the Democratic candidate claimed that Republicans were trying to privatize Medicare and increase seniors’ costs.

“The Ryan plan is an albatross, and every Republican voted for two Ryan budgets,” she said.

While Greenberg calls those contests bellwethers, Wasserman says they were races in which Republicans held extreme positions on the issue. Republicans beat back a similar effort in a special election in Nevada last year, in part by mounting a strong offense against the health care law – a strategy that Republicans are trying to duplicate in this year’s races.

But Kathy Boockvar, a Pennsylvania Democrat challenging Republican freshman Michael Fitzpatrick, continues to believe the issue will be decisive.

“This is a very significant part of my campaign,” she said in an interview. “I think we’ll pull back some seniors to the left.”