Researchers Tuesday released a deeper look at the Physician Group Practice Demonstration, one of the federal government’s first pay-for-performance experiments to improve health care and reduce costs for the Medicare population. They found that it created significant savings — especially for dual eligibles, which is the population who receives health coverage through both Medicare and Medicaid and who are often the health system’s sickest and costliest patients.

The study, appearing in the Sept. 12 Journal of the American Medical Association, shows the initiative’s participating physician groups generated $114 annually in average savings per patient overall. Among dual eligibles, they saved an average of $532 annually per patient. 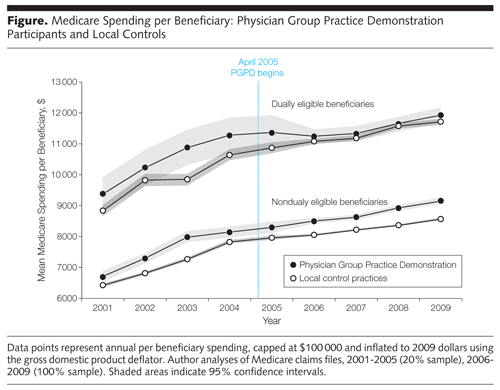 “Improvements of cost and quality for [dually eligible patients] can have big payoffs,” writes Dr. Donald Berwick, the former administrator of the Centers for Medicare and Medicaid Services, in an editorial released with the JAMA study.

CMS launched the demonstration program in 2005 as a collaboration with 10 large medical practices from around the country, which included 5,000 physicians and 220,000 Medicare patients. These medical groups were awarded bonus payments if they met spending and quality targets for their Medicare patients by coordinating care more effectively.

But Berwick writes that an earlier study concluded the demonstration project only met this goal half way, showing improvements in quality of care but “inconsistent and generally small effects on cost.”

Carrie H. Colla, the study’s lead author, and her team at the Dartmouth Institute for Health Policy and Clinical Practice, used a control group of Medicare patients who lived in the same county as the demonstration patients, but were being treated by non-participating physicians. In an interview, Colla said her team recognized that physicians in the demonstration program were diagnosing and treating patients for more chronic conditions. She said this was affecting estimates of savings calculated for bonus payments.

However, her team also found savings, primarily as a result of a reduction in hospitalizations, when compared with the control group patients being treated my non-participating physicians.

Colla, who is also a professor at the Geisel School of Medicine at Dartmouth in Hanover, N.H., said that the Physician Group Practice Demonstration is very similar to the accountable care model the federal government is currently trying to implement. And according to the study, “high-need populations could benefit the most from improved care coordination and chronic disease management.”

But Colla said that providers and health care experts are concerned “as health care delivery systems move from fee-for-service models to accountable care models, patients on Medicare and Medicaid might be difficult to manage and might lead providers to avoid these groups.”

She said the study’s aim was to look at how these models of care can impact a variety of vulnerable patients.

“In the past, physicians didn’t have any reason to avoid [dual eligibles]. Under fee-for-service medicine, the more care you provide the more you’re paid,” said Colla. “But when you are now responsible for managing their care and their spending it changes the story.”