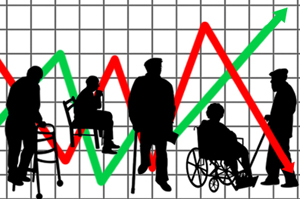 The Obama administration often touts the health-law provision that over the next decade will close the unpopular “doughnut hole” — a gap in Medicare prescription drug coverage.

But officials rarely cite another provision, one that might cause sticker shock among some seniors. Starting this year, more affluent beneficiaries will have to pay higher premiums for their drug benefits.

Since 2007, Medicare beneficiaries with incomes of $85,000 ($170,000 for couples) have had to pay more on a sliding scale than the standard premium for Medicare Part B, which covers physician and outpatient services. The health law extended this “income relating” to Medicare Part D, which covers prescription drugs. The change took effect in January.

In addition, the law froze the income thresholds that determine which seniors pay the additional costs. That means those thresholds won’t be adjusted for inflation through 2019, and more and more seniors will fall into this group.

Some seniors’ advocates fear that requiring wealthier seniors to pay higher Medicare premiums will encourage those beneficiaries to leave the program and get private insurance. And, since seniors with higher incomes tend to be healthier, their departure could drive up costs for the sicker seniors left behind.

“Where is that line where it becomes too much and then you have a two-tiered system?” said Nora Super, director of government relations for health at the seniors’ group AARP.

Others say it makes perfect sense to require seniors with higher incomes to pay more for Medicare. “Given where we are fiscally in this country, I really don’t have a big problem with making that argument that we ought to be asking seniors in that income category to pay a larger share of the value of the benefit they are receiving,” said James Capretta, a fellow at the Ethics and Public Policy Center, a conservative think tank. Capretta also said he doubted that seniors could get a better deal from a private insurer than from Medicare.

The federal health program for the elderly and disabled currently covers about 47 million enrollees, and the number is expected to rise to 60 million by 2019.

According to the Centers for Medicare and Medicaid Services, this year 1.7 million seniors will pay the higher premium for Medicare Part B coverage and 822,000 will pay it for Part D coverage.

The percentage of seniors paying the higher premium for Part B has remained at about 5 percent of beneficiaries since 2007. Now, with inflation adjusting gone, about 5.7 million seniors will be paying the higher Part B premiums by 2019; that’s about 10 percent of the total. Nearly 3.4 million beneficiaries will be paying more for their Part D coverage, according to CMS.

The Kaiser Family Foundation, in a separate analysis, estimated that those figures could be substantially higher. Kaiser projected that by 2019, 7.8 million beneficiaries will be paying the higher Part B premiums and of that group, 4.2 million also would pay the higher Part D premiums. Kaiser also estimated the combined premium costs in 2011 would range from $206 to $471 per month. By 2019, that price tag would be $299 to $683 per month, depending on beneficiaries’ income. (KHN is an editorially independent program of the foundation.)

By 2019, nearly one-fifth of Part B beneficiaries who enroll in the program for the first time will pay income-related premiums for their physician and outpatient coverage, according to the Foundation.

AARP lobbied against increasing premiums for higher-income seniors, but the pleas “sort of fell on deaf ears,” Super says, in part because Democrats need money to finance the health law. The Medicare income-relating provisions will raise about $36 billion through 2019, according to the Congressional Budget Office. AARP continues to oppose the provision and hopes to have it taken out of the law.

Meanwhile, AARP and other seniors groups are concerned that charging wealthier seniors more could encourage insurers to create policies that would be more attractive than Medicare.

“If you’re paying $400 a month you might be able to find insurance in the private market that would be less than that,” said Maria Freese, government relations and policy director for the National Committee to Preserve Social Security and Medicare. “If you’re healthier we need to keep you in the system in order to keep costs low for everybody else.”

Capretta said the odds are “very low” that wealthier seniors would leave Medicare in droves or that insurers would build new products to cover them. “You take an awful big risk by opting out of Medicare, which is guaranteed issue, community-rated insurance. I don’t think a lot of people would do that.”

Jonathan Blum, deputy CMS administrator and director of the agency’s Center for Medicare, said he’s not aware of any seniors who have left the program because they had to pay more for their Part B coverage, and he added that CMS is “confident that higher-income beneficiaries will stay in the Part D program based upon the history and the fact that the Part D benefit is more generous.”

He also said that while higher-income seniors would be required to pay more for their drug coverage, the benefit is more generous this year, pointing to the 50 percent discount for brand-name prescription drugs once seniors hit the “doughnut hole.”

Some Seniors Are In For Sticker Shock On Drug Premiums