Walter Bianco, an Arizona man denied access to new drugs to cure his hepatitis C infection, will get the costly medications after all. 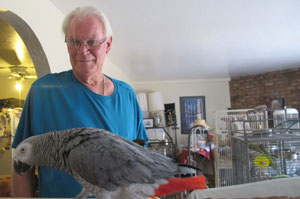 After Kaiser Health News and NPR described his plight in a story that aired Monday, federal Medicare officials said they would look into the case. Bianco’s appeal of an earlier denial had been rejected by WellCare, a private insurer that contracts with the federal program to provide drug coverage.  The insurer rejected coverage saying the combined use of the costly new drugs has not yet been approved by the Food and Drug Administration — even though two doctors’ groups had recommended the protocol in cases like Bianco’s.

Late Tuesday, Bianco’s doctor got word that the earlier denials had been reversed – an unusually fast turnaround for the agency.

“I am very pleased that Mr. Bianco received approval for the treatment he needs,” said Dr. Hugo Vargas of Mayo Clinic in Scottsdale, Ariz. “I hope all patients in similar (or more urgent) circumstances can be given a fair hearing.”

Bianco, whose liver has been severely damaged by the hepatitis C virus, said Medicare’s reversal “is great news for me, and hopefully for many others, since a precedent has been set now.”

In a statement, Medicare officials indicate that the new policy will apply broadly to hepatitis C patients whose doctors prescribe the combined use of the two drugs because they meet certain criteria laid out in January by the Infectious Diseases Society of America and the American Association for the Study of Liver Diseases. Those guidelines recommend the combined use of the two drugs in patients with advanced liver disease who have failed to be cured by earlier drug regimens – even though the FDA has not yet approved the combination.

Medicare officials say that beneficiaries “are required to have access to needed therapies” if they have demonstrated “medical necessity” and have “medically accepted indications” for the treatment.

The agency is reportedly conferring with medical specialty groups on refining the guidelines about when patients should be treated with which regimens.

For now, Medicare’s Part D plans may decide on a case-by-case basis whether to approve payment for the costly drugs. But if the plans deny payment, consumer advocates say patients will now have a good chance of prevailing because of the new stance by federal officials.

There is little doubt that coverage of the drugs will be a substantial financial burden for the program.

Sean Cavanaugh, deputy Medicare administrator, recently told a U.S. Chamber of Commerce summit that the agency hopes to have a handle on potential costs later this year after it receives bids from Part D drug plans which will take the cost of the new treatments into account.

One of them, called Sovaldi, costs $84,000 for a typical 12-week course of treatment, although some patients will need to take the drugs for 24 weeks. The other, Olysio, costs about $66,000, but is approved for fewer types of patients. Other drugs must often be used with the two new products, adding to the cost.

The issue of paying for the expensive new drugs – which may cure upwards of 90 percent of patients — is being closely watched by patient advocates, federal health and budget officials, state Medicaid directors, the Department of Veterans Affairs, and corrections officials across the country. All face billions of dollars in potential obligations to treat the three to five million Americans infected by the deadly virus.

The publication Inside CMS has reported that Gilead Sciences, maker of Sovaldi, gained 90 percent of the $2.1 billion first-quarter sales of the drug – a record for any new drug – from Medicare and private health insurers. Another 7 percent of sales came from Medicaid.

Medicare officials’ fast response in the Bianco case is an indication of the political sensitivity of rejecting potentially life-saving coverage based at least in part on the drugs’ costs. “We want to try to be as helpful as we can to get beneficiaries the drugs that they need,” a Medicare spokesman said earlier this week.

Or to put it the other way around, no one wants to be the first to say that patients who need the drugs can’t get them– in other words, that hepatitis C has pushed the nation into explicit rationing of life-saving care.