Concerned that a growing number of seniors have been unexpectedly forced to pay thousands of dollars for nursing home care after a stay in a hospital, Medicare has launched a pilot project to test whether relaxing its hospital payment rules could help beneficiaries. 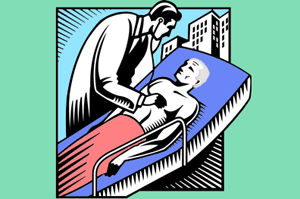 The issue revolves around what should be an easy question: Is the Medicare beneficiary an inpatient? Although many seniors stay in the hospital for several days and are in a regular hospital room while being treated, they may be classified as observation patients, which is considered outpatient service.

That can be costly for seniors. Under Medicare rules, they must have at least three days in the hospital as an inpatient – not just for observation — to qualify for Medicare coverage follow-up care in a nursing home.  In addition to generally higher hospital co-payments, observation patients can be billed any amount by their hospital for the routine, maintenance drugs they need. Some have reported charges of $18 for one baby aspirin and $71 for one blood pressure pill that costs 16 cents at a local pharmacy.

This may all come as a surprise since hospitals don’t have to tell Medicare beneficiaries they are in observation care.

Currently, if Medicare decides that a hospital has billed it for inpatient treatment of a patient who should have received observation services, the facility can lose its entire payment and is not paid for the cost the observation care. That may prompt hospitals to put too many people in observation care, Medicare says in the rule announcing the pilot program. Under the pilot, the 380 hospitals participating will be able to rebill Medicare for observation services if claims for inpatient care are rejected.  Medicare officials want to see if that takes some of the pressure off hospitals.

“It’s pretty arbitrary,” she says.  “People get the same care whether they are inpatient or observation, especially when they are co-mingled in the hospital.”  The center has filed a lawsuit against the government to eliminate observation care.

“Why do we have this terminology?”  she asked.  Treatment decisions should be made on medical necessity, she said, “not based on a billing issue.”

A Medicare spokeswoman would not respond to questions about the project or provide a list of the participating hospitals because of the litigation.

As part of its announcement about the project, Medicare officials are also asking for feedback on whether to tighten the rules for observation care, including setting a time limit or specifying which diagnoses require a full hospital admission.

During the three-year pilot, if Medicare determines that an inpatient level of care was inappropriate, the participating hospitals will be able resubmit bills to Medicare for each treatment or procedure the patient received, as if that patient were an observation patient. The hospitals will receive 90 percent of the allowable Medicare payment for these services. In return, the hospitals give up the right to appeal to Medicare for the full inpatient payment.

Still, the payment experiment doesn’t go far enough for the American Hospital Association.  “It is limited to a small fraction of hospitals affected by the policy, underpays hospitals for care provided and requires hospitals to waive all appeal rights for these claims,” said spokeswoman Alicia Mitchell.