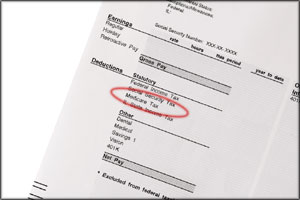 Should affluent Americans have to pay Medicare payroll tax on their investment income?

President Barack Obama, to help pay for his health care overhaul package, is proposing that high-income Americans pay Medicare taxes on the money they make on their investments. Historically, only earned income has been subject to that tax. He also wants to increase the Medicare tax rate on wealthy Americans’ wages.

Here are some basic questions and answers about this little-discussed provision that could affect millions of people:

1. What did Obama propose?

Obama’s health care plan, released Feb. 22, would cost roughly $950 billion over 10 years and extend health insurance to about 31 million Americans who are currently uninsured, according to White House estimates. To help raise money for that effort, the president proposed the new tax on investment income and the increase in Medicare tax rates for the wealthy. The rate increase also is in the Senate-passed bill.

The new investment and payroll taxes would raise about $184 billion by 2019, according to a preliminary analysis by the Joint Committee on Taxation.

Another Obama funding source for a health overhaul — a tax on high cost “Cadillac” health plans, also is included in the Senate bill. But by picking up revenues through proposed changes in the Medicare tax, Obama was able to water down the Cadillac tax – a key White House goal, given labor union’s opposition to it. The president’s Cadillac provision would generate only about one quarter of what the Senate’s proposal would raise. That’s because implementation would be delayed and the tax would apply to fewer plans.

2. How would the Medicare taxes work?

Under Obama’s plan, individuals with incomes of more than $200,000 – including both wages and investment returns -would pay a 2.9 percent tax on interest, dividends, royalties and other unearned income that exceeds that threshold. Couples with total incomes over $250,000 would face the tax, too.

Right now, that couple would pay $3,987.50 in Medicare taxes each year. Under the proposal, they would pay $4,212 on their wages and $4,350 on their investment income, $8,562, assuming all of that income is taxable. Congressional estimators predict any final policy would include some exemptions, such as the costs of generating investment income.

3. Who would be affected?

Taken together, both the earned- and investment-income portions of the tax would hit the top 2.6 percent of U.S. households, according to The Tax Policy Center, a joint project of the Urban Institute and the Brookings Institution. That would allow Obama to keep his campaign promise not to raise taxes for 95 percent of the country’s households.

The tax on investment income would not apply to some non-wage income from certain small businesses. Under current law, employees of S corporations, a type of company with a limited number of shareholders, are able to receive some of their income as distributions – a share of the companies’ profits – rather than as wages.

Lobbying by business groups helped ensure that S corporations’ employees who are also shareholders wouldn’t face the new tax on their share of the profits. However, people who invest in S corporations, but do not participate in the operation of the business, would have to pay the new Medicare tax on any dividends or other unearned income they receive from the business.

4. How does the Obama plan compare to Democratic congressional proposals?

Democratic leaders working toward a compromise between the House and Senate bills had tentatively reached a labor-backed compromise that included a Medicare tax on investment income less than a week before Republican Sen. Scott Brown’s Jan. 19 election in Massachusetts undercut Democrats’ filibuster-proof majority and stalled the debate.

The investment-income tax was suggested last year by Sen. Debbie Stabenow, D-Mich., but senators rejected the plan. The Senate also refused to accept a House plan to increase taxes on the rich. However, the new taxes proposed by Obama have not provoked any serious complaints from Senate Democrats yet.

The tax will likely have some appeal to the more liberal House members, who resisted the Senate’s Cadillac tax. Unions, an important constituency for liberal House lawmakers, have argued that the Cadillac tax would affect some middle-class union members with high-value health benefits. Obama’s proposal would subject fewer plans to that tax.

5. What are the arguments for and against the idea?

Proponents of the tax changes, such as the liberal Center on Budget and Policy Priorities, a think tank, argue that the new taxes would hit only a tiny portion of American households and would increase the fairness of the tax system. The group notes that, currently, the wealthy pay a much smaller portion of their incomes in Medicare taxes than do middle-class and lower-income Americans. That’s because the affluent get a bigger proportion of their incomes from capital gains and dividends, which aren’t subject to the payroll tax.

But critics, including Rep. Eric Cantor, R-Va., the House minority whip, complained at the recent White House health summit that the investment tax, in particular, would hurt small businesses and discourage investment. John Goodman, of the conservative National Center for Policy Analysis, agreed. “When you’re in a deep recession, the last thing you want to do is reduce investment,” he said. “And that’s what happens when you tax investment.”