Seniors living in three states will need prior approval from Medicare before they can get an ambulance to take them to cancer or dialysis treatments.

The change, which begins today, is part of a three-year pilot to combat extraordinarily high rates of fraudulent billing by ambulance companies in Pennsylvania, New Jersey and South Carolina.

The good news is that Medicare beneficiaries in those states will now know beforehand whether the program will cover their non-emergency transportation to treatments. The bad news, say advocates, is that many fragile people will be left with no way to get to appointments that might mean the difference between life and death. 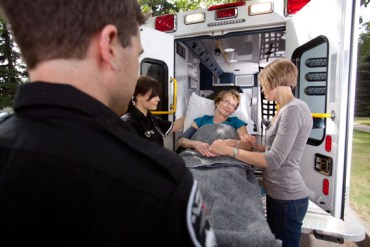 “Often people have to go long distances, they feel lousy when treatment is over, and in some cases, it’s to the point of being dangerous in providing their own transportation,” said Jon Burkhardt, a consultant who has studied transportation for dialysis patients.

The pilot is part of a move by Medicare to require prior approvals for services and equipment associated with a high incidence of fraud, such as wheelchairs, chiropractic visits and plastic surgery. Officials said the three states were selected based on “high utilization and improper payment rates.”

If cost savings are shown, the program is expected to be expanded nationally.

Kate Kraemer, billing manager at Direct Bill Inc., which helps a Pennsylvania ambulance firm collect Medicare payments, said the demonstration will keep dialysis patients from being surprised by bills that are denied weeks after they receive the service. Those bills can range from $150 to $600 per roundtrip for three visits a week, whereas a non-ambulance trip can be as little as $25.

But Kraemer said the project doesn’t do anything about the real problem — patients who don’t qualify for reimbursed transportation, but who do not have friends or family to drive them and are too weak after a three-to-four hour dialysis session to drive themselves. Many cannot afford the cost of any form of transportation.

Since Medicare doesn’t cover non-medical transportation at all, some patients gamble that it will cover use of an ambulance — even when less expensive transportation might be more appropriate.

A 2013 report by the Health and Human Services inspector general found that transports of renal disease patients to dialysis facilities increased by 1,436 percent in Pennsylvania between 2002 and 2011, by 1,129 percent in New Jersey and by 9,659 percent in South Carolina. Those figures compare to national growth rate of 269 percent.

That report didn’t address the issue of fraudulent billing. But a 2010 inspector general report indicated that 20 percent of the agency’s spending on nonemergency ambulance trips were improper because the ambulance company overbilled the program, or transported people who didn’t need or qualify for the service.

For a patient to qualify for transportation to and from treatment under Medicare, they have to require the medical attention an ambulance provides — for instance, be confined to bed or need medical care like intravenous fluids during the trip.

Ambulance providers can make 40 round trips during a 60-day period before having to submit another authorization request.

Medicare doesn’t pay for transportation for people who are simply too weak from treatment to drive themselves. Doctors often try to write orders for patients they think might need the service, though in many cases, the patient doesn’t qualify for that level of care.

“Some patients who need and deserve to get the transports will find them delayed because some will get denied inappropriately,” said John Howley, a New York lawyer who has worked on transportation health care issues. “Some people will get hurt.”

Alaina Macia, the CEO of national transportation provider MTM Inc., based in Lake St. Louis, Mo., said that after the company implemented prior authorizations for people covered by commercial insurers, there were 10 percent to 20 percent fewer trips because people did not qualify.

Marsha Simon, president of health care consulting firm Simon & Co. in Washington, D.C., said the number of people with end-stage renal disease who need dialysis has grown — 116,946 people received the diagnosis in 2010, bringing the total number of patients that year to 594,374. In 1980, about 60,000 people had an ESRD diagnosis.

“If they don’t get to appointments, they’ll end up in the hospital at even greater costs to Medicare,” Simon said. “Virtually none of the claims qualify, but that doesn’t mean they don’t need help getting to and from” appointments.

Transport is available from some local governments, nonprofit groups and dialysis centers for people who don’t qualify for non-emergency ambulance transportation. Most Medicare Advantage plans offer transportation to get to doctor appointments and treatments, but at most, those plans cover only 20 trips a year.

Scott Bogren, communications director of the Community Transportation Association of America, made up of public and private transportation and health entities, said the group will push for a transportation benefit in Medicare as awareness spreads about the costs of chronically ill patients missing critical appointments.

“Our concern for years has been that a lot of trips that aren’t ideally provided in an ambulance are going in an ambulance because there’s no other way to do it,” Bogren said.

“If something requires constant, routine transportation, the concern is that if you’re not Medicaid eligible, how do you make that work?”

Medicare Tightens Non-Emergency Use Of Ambulances To Combat Fraud