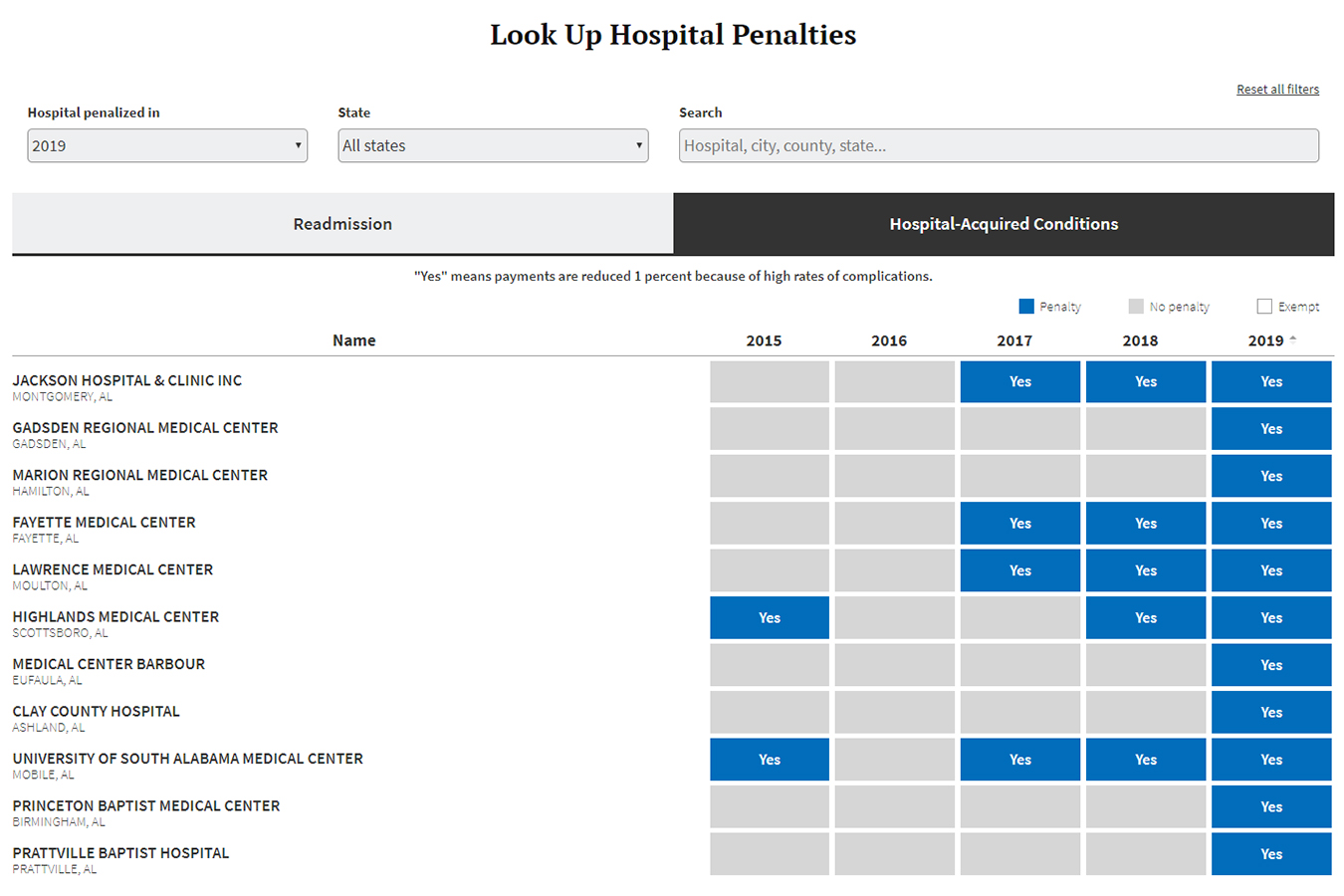 Look Up Tool
Here are the 800 hospitals hit with safety penalties for 2019. You can filter by location, hospital name or year.

Eight hundred hospitals will be paid less by Medicare this year because of high rates of infections and patient injuries, federal records show.

The number is the highest since the federal government five years ago launched the Hospital Acquired Conditions (HAC) Reduction Program, created by the Affordable Care Act. Under the program, 1,756 hospitals have been penalized at least once, a Kaiser Health News analysis found.

Look Up Your Hospital: Is It Being Penalized By Medicare?

This year, 110 hospitals are being punished for the fifth straight time.

The penalties pit hospitals against one another in a race to prevent the most infections, blood clots, cases of sepsis, bedsores, hip fractures and other complications. Each year, the quarter of general hospitals with the highest rates are punished, even if their records have improved from the previous year.

Under the latest round of sanctions, each hospital will lose 1 percent of its Medicare payments for patients discharged between last October and this September. That comes on top of other penalties created by the health care law, such as annual payment reductions for hospitals with too many patients being readmitted.

The hospital industry has protested the HAC penalties, saying the program’s design creates an arbitrary cutoff for which institutions get punished and which don’t. The American Hospital Association calculated that only about 41 percent of the 768 hospitals penalized in 2017 had HAC scores that were statistically significantly higher than hospitals not being penalized.

“There are not statistical differences that would warrant a quarter of the hospitals in America getting a penalty,” said Nancy Foster, the association’s vice president for quality and patient safety.

Hospitals also complain that the ones that do the best job testing for infections and other threats to patients appear to be among the worst based on statistics, while their more lackadaisical peers look better than they might be.

Supporters of the punishments argue that the penalties are warranted in prodding hospitals to improve quality. The threat of losing money elevates the issue in many hospitals to the attention of directors and owners, said Missy Danforth, the vice president of health care ratings at the Leapfrog Group, a nonprofit devoted to patient safety.

“The fact that everyone’s talking about it, from front-line nurses to boards of directors, is positioning patient safety where it should be, which is at the forefront of everyone’s minds,” Danforth said.

Danforth dismissed hospital complaints that the penalties are not always fairly applied. “There’s a lot of really strong, good best practices to getting to zero on these infections,” she said.

Hospital patients suffered an avoidable injury in 9 of every 100 patient stays in 2016, about 2.7 million times, according to a June report from the federal Agency for Healthcare Research and Quality. Those included a bad reaction to medication, an injury from a procedure, a fall or an infection.

The frequency of complications has been dropping in hospitals. The report found an overall 8 percent decrease from 2014 to 2016. However, the report also found a jump in the numbers of bedsores and urinary tract infections in patients with catheters during that time.

The Hospital Acquired Conditions Reduction Program assesses penalties based on a subsection of the injuries examined in the AHRQ report. For each hospital, Medicare judges infection rates related to colon surgeries, hysterectomies, urinary tract catheters and central lines inserted into veins. Medicare also counts the number of infections of methicillin-resistant Staphylococcus aureus, or MRSA, and Clostridium difficile, known as C. diff.

Finally, the government tracks the rate of blood clots, sepsis, post-surgical wounds, bedsores, hip fractures and five other types of in-hospital injuries. Because the penalties will be applied as hospitals submit claims for reimbursement, the total dollar amount of penalties for each hospital will not be known until the federal fiscal year ends in September.

Medicare excludes from consideration a number of specialized hospitals: those serving children, veterans and psychiatric patients. Maryland hospitals are also exempted because the federal government gives that state leeway in how it pays hospitals. And more than 1,000 “critical access” hospitals, which are the only institutions in their area, are also excluded.

For the remaining hospitals, penalties are assigned to the quarter of institutions with the highest HAC rates. That threshold varies slightly from year to year, and is a major reason that the number of hospitals being punished fluctuates annually. Before this, the largest number of hospitals punished was 769, two years ago.