Medicare is accelerating plans to peg a portion of doctors’ pay to the quality of their care.

The changes would affect nearly 500,000 physicians working in groups. The federal health law requires large physician groups to start getting bonuses or penalties based on their performance by 2015, with all doctors who take Medicare patients phased into the program by 2017.

The program is a major component of Medicare’s effort to shift medicine away from its current payment system, in which doctors are most often paid for each service regardless of their performance. The current system, researchers say, financially encourages doctors to do more procedures and is one of the reasons health costs have escalated. The health law required Medicare to gradually factor in quality into payments for hospitals, nursing homes, physicians and most medical providers. 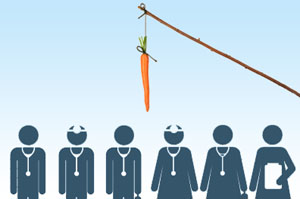 But the provision regarding doctors is considered the most complicated to enact, and it has encountered strong pushback.

Major physicians groups have been pushing Congress to repeal it, while some health policy experts fear the amount of money Medicare plans to use for incentives will be too small to prod doctors to improve their patient care.

Medicare had already decided that large physician groups — those with 100 or more doctors, nurses, social workers or other health professionals — will gain or lose as much as 1 percent of their pay starting in 2015. Those incentives would double to 2 percent the following year under draft regulations Medicare released this month.

The proposal also would phase mid-sized physicians groups—those with between 10 and 99 health professionals—into the program in 2016 instead of in 2017. While they would be eligible for bonuses up to 2 percent, they would be shielded from any penalties for that first year.

In 2017, the program would add the remaining doctors in practices of nine or fewer professionals— about 350,000 doctors, according to Medicare’s estimates.

Pay for many doctors would likely not be altered because their performances were average, although Medicare hasn’t announced exactly how it will dole out bonuses and penalties. There have to be financial losers in the program, because the health law requires that the program not increase the budget deficit.

The bonuses and penalties—formally known as the physician value-based modifier—would be calculated on quality measures that vary from specialty to specialty. Many of those measures check to see how often doctors follow basic medical approaches, such as screening older women with fractures for osteoporosis and documenting in medical records every drug a patient is taking. At least at the start, physicians will be able to select which of Medicare’s measures they want to be judged by.

In determining bonuses and penalties, the government also plans to take into account how much each doctor’s average patient costs Medicare, in order to encourage a more judicious use of testing and more aggressive efforts to avert hospitalizations. Medicare plans to compare physicians against others in their specialties. Physician groups whose patients are the least costly to Medicare—after taking into account their overall health—are eligible for bigger bonuses and softer penalties.

Although Medicare is using the size of all the professionals in a group to determine when they will be phased into the program, the bonuses and penalties would only apply to the bills from physicians.

Medicare said the latest changes were a response to concerns that the penalties were not severe enough to actually change physicians’ behavior.

“To really make physicians wake up you’re going to have to make it more than 1 or 2 percent,” said Michael Kitchell, past president of the Iowa Medical Society and a neurologist at the McFarland Clinic in Ames, one of the state’s largest practices. “It isn’t that every physician is going to be happy. Some are going to resist these changes. But these quality measures are also evolving so they will become measures that matter.”

Kavita Patel, a health expert at Brookings’ Engelberg Center for Health Care Reform, said the smaller the medical group, the more challenging it will be for the doctors to adjust to a new system where they must report quality measures to Medicare and may have their pay docked if they underperform.

“Most of these big practices have figured out how to integrate it into their work flow,” she said. “If you think of groups of 10 or more, the upside makes a lot of sense, but I’m still concerned about how these smaller practices will too share in downside risk.”

The American Medical Association has been urging Congress to eliminate the program when lawmakers complete the annual ritual of adjusting Medicare pay to physicians to avert massive automatic cuts. “To impose a program that takes money off the top of payments that have not kept up with inflation for more than 10 years will increase the migration of physicians into hospital settings, driving up overall Medicare spending in the process,” the AMA wrote in a letter to the House Ways and Means Committee in April.