If someone is well-educated, the odds are that he or she will marry someone with similar credentials, according to census data. And that trend has consequences when it comes to access to health care in rural areas.

Rural areas have for years been facing a doctor shortage. That means for the roughly 20 percent of Americans who live in those areas, it’s harder to get care when it’s needed. Policymakers have been trying to create programs that offer medical debt forgiveness and other incentives to doctors willing to set up shop away from the city. But a research letter published Tuesday in JAMA highlights how a key demographic change — the rise of power couples — is stacking the deck against these efforts.

According to the research letter, doctors are much more likely to marry people with advanced degrees than they used to be — 54 percent of married doctors in 2010 compared with less than 10 percent in 1960. 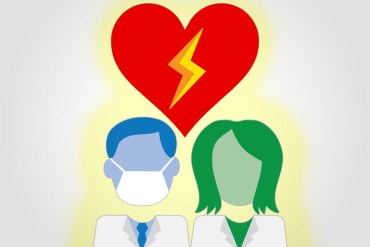 Part of that jump has been fueled by the surge in women physicians. Now, about one in three doctors in the country are women. In 1960, according to the researchers, only about 4 percent were. In addition, the researchers note that when female doctors marry, they’re more likely than men to marry someone with a graduate degree: 68 percent of them did so, compared with 48 percent of men.

These trends, the authors write, could further reduce the odds of these physicians working in rural areas. About 4 percent of power couples worked in underserved rural areas between 2005 and 2011, compared with about 7 percent of married doctors whose spouses weren’t as highly educated. That’s a small difference, but the researchers argue it’s still relatively significant. (They also qualify the finding, noting that its applicability is limited by the fact that, no matter what, the number of married doctors in rural areas is small.)

But for small towns, the challenge is real. The researchers suggest that physicians who have spouses who are doctors themselves — or lawyers, investment bankers or in other fields that are marked by graduate degrees — are also more likely to live and work in places where their partners can find jobs. More often, those places are cities. And, if a spouse has a high-paying job, the couple is more likely to consider it now than they previously would have.

This “wasn’t an issue 40 years ago and now is a major concern for physicians,” said Doug Staiger, a professor of economics at Dartmouth University who co-authored the study. “Anyone who’s tried to recruit in rural areas — [it’s] hard to overcome, given the lack of jobs.”

Rural communities often don’t have economies that support the power couples’ dual professional goals. “Money’s great,” Staiger added. “Being able to continue your career is probably most important to most couples.”

Then there’s the likelihood that city life is often a draw, where it might be easier to find a theater, an art gallery or trendy new restaurants. “There’s still a big discrepancy in educational, cultural and other areas … that make urban areas preferable,” said Andrew Bazemore, a D.C.-area family physician who directs the Robert Graham Center, which researches family medicine policy and is an outpost of the American Academy of Family Physicians.

So, Staiger suggested, if policymakers want people in rural areas to get better health care, they should consider other fixes that enlist telemedicine — through which patients conference with the doctor over technologies like Skype or FaceTime.

But not everyone agrees. Brock Slabach, senior vice president at the National Rural Health Association, argued such a solution would shortchange small-town patients. He thinks medicine — especially primary care — can’t effectively be given over a computer screen, because subtler kinds of communication will get lost.

The people who are underserved, he added, are the ones “who basically feed those other 78 percent of Americans that live in urban areas.”

“We need to be sure that individuals, no matter where they live, have access to high quality primary care,” he said.