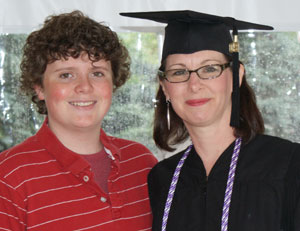 Barbara Lopez, 46, graduates from Rush University’s College of Nursing. Her son, Nick, 16, stands by her side   and her decision  to go back to school. (Barbara Lopez)

It wasn’t supposed to be this hard. Nursing student Barbara Lopez had been told for a long time that she would have an easy time finding a job.

But it took her five months starting before she graduated in June — to find a job, at Rush University Medical Center in Chicago. By mid-August, she said, many of her classmates were still unemployed. “I went to Rush because the reputation is very good . . . and it was close to home,” Lopez, 46, said.

Not so long ago, nursing school grads had it much easier. Job opportunities exploded during the past decade. Facing a shortage of nurses, hospitals were eager to hire qualified nurses. No matter their specialty, nurses were virtually guaranteed a job wherever they pleased.

Nursing, even in hard times, was thought to be recession-proof.

That was before the recent economic collapse. Before current nurses who are hoping to ride out the recession put off retirement or filled full-time jobs  rather than convenient part-time work  to increase their incomes.

As economic conditions force a tighter job market, new nurses find it’s harder than ever to land their dream job-or any job, for that matter. Nursing school officials say jobs in large Metro areas, such as New York and California, are extremely difficult to get, although hospitals in rural areas in states such as Virginia and Georgia are still recruiting.

“This has been a very sudden shift,” said Kathy Moore, director of admissions and student services at the University of North Carolina’s nursing school.

Administrators like Moore, at some of the nation’s top-ranked nursing schools, said the economy is the primary culprit. When the economy plummeted last year, medical staffs that were otherwise hiring suddenly stopped.

“There’s been a lot of publicity about nursing as a good career choice,” said Sandra Angell, associate dean for student affairs at the Johns Hopkins University School of Nursing. “Up until January, until the entire economy went sour, jobs were very plentiful in nursing.”

Throughout the economic growth of the past two decades, the demand for nurses continually increased. From 2002 to 2003 and again from 2007 to 2008, the number of nursing jobs mushroomed, according to a July study published in the policy journal Health Affairs. Estimates suggest those booms alone added more than 400,000 nurses to the workforce.

Now, nurses have a decidedly more difficult search ahead of them. According to the study, the number of unemployed nurses will continue to rise into 2010. Wages also will remain flat since it will take fewer incentives to recruit nurses desperate for jobs.

Angell and officials at other universities said the tighter market is forcing students to rethink their approach to searching for jobs. Moore, from North Carolina, said she is adjusting career planning seminars and developing strategies to help her students find employment.

“[Students] had to be more proactive and cast a wider net,” Angell said. “They are finding positions but it’s taking a little longer for some of them and there are parts of the country that are tight for employment.”

But relocating to a smaller, rural area isn’t practical – or possible – for all graduates.

For Becky Jones, a July graduate from of the University of North Carolina, moving away from the Chapel Hill area was not an option. The 50-year-old mother wasn’t willing to uproot her family in pursuit of a job. Although she looked at smaller, rural hospitals around Durham, she said, nobody there was hiring.

Closer to graduation, Jones found a job with the University of North Carolina’s hospital, but she said her lack of experience and the difficult market complicated the job search more than she anticipated.

Still, analysts suggest that the current problem is directly related to the recession and that the nursing shortage is not resolved. Experts expect the demand for nurses to increase again with the retirement of the baby boomers and a possible influx of newly insured individuals if a national health-care reform program is approved by federal officials. If anything, a “hiccup” in the system is causing a temporary tightening of the job market. It’s not to say hospitals aren’t hiring, they said, but that they aren’t hiring as eagerly as before.

“The nursing shortage has not gone away,” Moore said. “What has happened is that due to the economic downturn, the shortage seems to have temporarily abated. But it is not universal.”

The Bureau of Labor Statistics, which projects employment shortages, agrees that the current hiring trends are only temporary.

The bureau’s latest projections, published in late 2007, include several health-care categories  including nursing  in its list of the fastest growing jobs.

The bureau projects growth into 2016, although that doesn’t necessarily exclude temporary downturns, said Alice Ramey, a BLS analyst. She said the agency only produces long-term projections and does not account for year-to-year changes.  Although there could be small rises and declines in employment over time, she said, projections still suggest an upward trend.

Mere projections are little comfort to those still searching for a job.

“I feel like I’m being ignored,” said Holly Proctor, who graduated from the University of North Carolina in July. Proctor was not hired at her first choice hospital, Wake Medical Center in Raleigh, N.C., where she completed her clinical training.

Starting out, she expected to find a job even before graduation. But after 14 months in school and a few weeks into unemployment, she said she’s becoming restless, eager to start a job and put her training to the test.