For Chirlane McCray, New York City’s first lady, mental illness is not an abstract concern. It’s deeply personal. Both of her parents suffered depression, something she describes openly; and, in 2013, McCray’s daughter Chiara went public about her own battle with depression and substance abuse.

McCray is trying to tackle the issue head-on. She is spearheading an initiative — backed by close to $850 million — to improve access to mental health services in New York City. It entails boosting the number of people who can treat disorders like depression and anxiety, and partnering with agencies like public schools and the New York Police Department to reach people who might otherwise go untreated.

She hopes it will serve as a model. “Every city’s not a New York,” McCray says, “but there are similarities.” And, because she considers local governments to be especially well-positioned to improve health care access, she’s organizing a conference this fall for city leaders from all over the country to share ideas.

McCray sat down with Kaiser Health News reporter Shefali Luthra to discuss how New York City’s proposals could translate to other parts of the country and how cities can reach people who are traditionally overlooked by the mental health system.

The conversation has been edited for length and clarity.

Q: What role can cities play in bolstering access to mental health care? Are there unique advantages they have?

Cities can lead because mayors are uniquely positioned in terms of being really close to the people. I attended the U.S. Conference of Mayors. And unlike governors, and unlike members of Congress, mayors are right there, dealing with the everyday struggles of people. They are more sensitive in terms of what people need, on a day-to-day level.

Cities can actually mobilize different types of resources: community-based organizations and churches and synagogues and mosques. All of these different first responder type organizations are much more available.

Mayors are much more plugged in.

Q: How do New York’s needs and plans compare with that of other cities?

Q: One of the big problems regarding the mental health care system is its shortage of providers. In your plan for New York, you talk about how to build that supply and make it more diverse.

We are not going to grow the workforce we need overnight. That is clear. But we can look at alternative methods, which have evidence-based proven ways to address the situation.

We are doing that by training a quarter of a million New Yorkers in mental health first aid. We are working to raise the level of awareness, educate people, and sort of demystify mental illness and substance abuse so people can help their family members and friends. We are making sure that we actually are reaching into high-need communities, communities that don’t have professionals that look like them.

I heard this over and over again, everywhere I went. “I want to talk to somebody who looks like me, who speaks my language, who understands my religion. And it doesn’t exist.”

There are a lot of ideas that are burbling about, but this is one of our priorities. 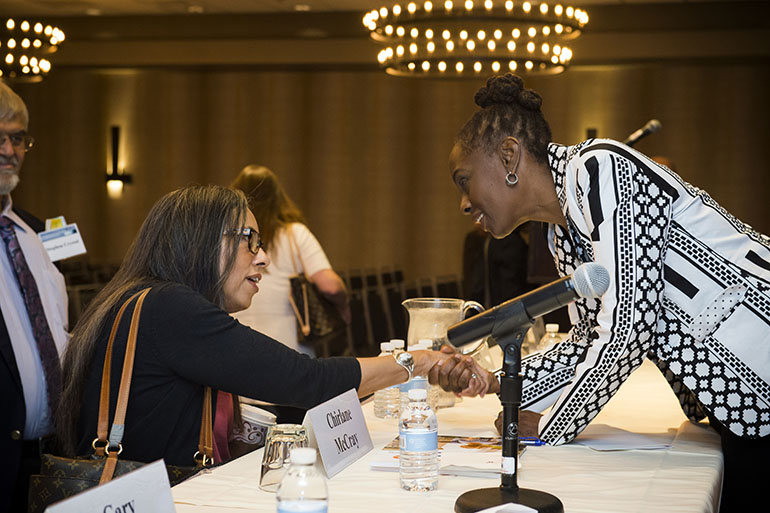 Q: It sounds like one idea you are thinking of is more ‘midlevel’-type providers — someone who is not a psychiatrist but is more knowledgeable than my next-door neighbor.

When you think about our teachers, members of our clergy — they do this work, even though they may not be trained to. Some of them actually are somewhat trained — some of them have been social workers or doctors — but you don’t necessarily need that. You don’t need a psychiatrist to treat depression, which is the number one cause of disability now in our nation. You don’t need a psychiatrist to help someone with anxiety disorder, necessarily. All these diseases have a range from mild to severe.

We are also thinking about training a new class of worker: a community mental health worker, who works with members of the community — whether it be through involvement in a community-based organization or at a church, et cetera — to screen for mental health needs and refer to help as needed. And there are models in other countries of people who do this work and are able to help folks who suffer from things like depression and anxiety.

Q: Might that address some of the diversity concerns you described?

Absolutely. Because they will come from the neighborhood and be trusted and understand how to talk to people in a way that is sensitive and understands the history and culture of the place.

Q: You have been able to line up nearly $1 billion to fund your initiative. Is that something other cities will need to do, too, in order to meet their mental health care needs?

Every city will not have that [level] of resources. But then again, every city is not as big as New York City, so they may not need that kind of money.

And everything we are doing doesn’t require funding. Something like screening pregnant women and mothers for maternal depression is something that requires a new approach by doctors and pediatricians and OB/GYNs. It just requires them asking a series of questions. But we had to actually gather people together and say, “Look, we can have a huge impact on something that could have lifelong consequences for a child and a family, by just doing work a little differently.” It’s not a change in the funding. It’s just a change in the way they approach the conversation.

It really depends on the needs of the city.

Q: What do you hope to see moving forward?

The most important thing is changing the culture. We’ve already been taking great strides.

It is change in the culture and ability to know there’s always someplace that a New Yorker can go to get help. No matter who you are as a New Yorker, it’s OK. Mental illness and substance abuse disorders are treatable. And, there’s somewhere to go.

That’s what success looks like to me. Of course I want to do even more but if we do those things, I think that will be a huge sea change.

‘Mental Health First Aid’ — Chirlane McCray On How N.Y.C. Is Fixing The System