In his speech at the memorial service for the Newtown victims, President Barack Obama included mental health in calling for a national response to the massacre, a conversation that so far has focused on gun control. “I will use whatever power this office holds to engage my fellow citizens — from law enforcement to mental health professionals to parents and educators — in an effort aimed at preventing more tragedies like this,” the president said. 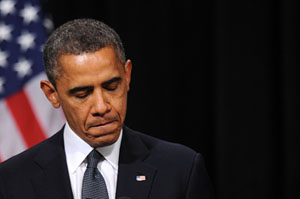 On Monday White House spokesman Jay Carney pointed to the federal health law as evidence that the administration has already started to tackle the issue. Mental health issues are “clearly a factor that needs to be addressed in some of these cases of horrific violence,” Carney said. “Obamacare, if you will, has ensured that mental health services are a part of the services” provided under the health law.

Insurance coverage for mental health treatment has long been spotty. More than a quarter of U.S. adults have a diagnosable mental health problem in any given year, but fewer than half receive treatment. While the Affordable Care Act, along with the Mental Health Parity Act of 2008, go a long way toward assuring coverage for most Americans, some gaps persist. There are questions, for example, about just what counts as equivalent treatment under the parity law, and whether it’s being fully enforced.

Here are some answers to frequently asked questions about mental health coverage:

The Mental Health Parity and Addiction Equity Act, signed into law in 2008, made a big dent in the problem of mental health coverage.

Under that law, employers with more than 50 workers that include mental health services in their insurance plans were barred from covering them at a lower level than other medical conditions. That means that the plans could not provide fewer inpatient hospital days or require higher out-of-pocket costs, more cost sharing or separate deductibles for mental health conditions.

An estimated 140 million Americans were expected to benefit from the changes. But Paul N. Samuels, director and president of the Legal Action Center, says that some people still aren’t receiving equal coverage, and the law is not always enforced. “That’s a problem we’re really concerned about,” he says.

And while the law guaranteed parity for employees of companies that chose to offer mental health coverage, the law didn’t require employers to offer such coverage. Even so, in 2012, 85 percent of employers offered some form of mental health benefits, according to the Society for Human Resource Management.

What if I don’t have mental health coverage in my employer’s insurance plan? Will the ACA change that?

Employers with 50 or more workers can continue to not offer the benefits. But small group and individual plans will be required to offer the coverage in 2014 through online exchanges created under the law.

I’m planning to buy an insurance plan through one of the new exchanges. What kind of mental health coverage will I have?

All plans sold in the exchanges will be required to provide coverage for mental health and substance abuse as one of 10 essential benefit categories. That coverage must also comply with the parity laws already required for large employers. The exchanges will be open to individuals and small businesses.

The same rules will apply to small group and individual plans purchased outside of the exchange.

This means that beginning in 2014, if you, or your small employer, are purchasing any new insurance plan, coverage will include mental health benefits on par with any other medical condition. It’s not clear what exactly will be covered – for example, group home and residential treatment outside of a hospital.

I’ll be covered under the Medicaid expansion authorized by the law. What kind of mental health coverage will I get?

If you earn less than 138 percent of the federal poverty level (about $32,809 for a family of four), you may be newly eligible for Medicaid coverage in 2014. Like people who purchase coverage through the exchange, new Medicaid beneficiaries will receive mental health benefits on par with other medical or surgical needs.

That coverage is less robust than the current traditional Medicaid coverage offered by states, says Jennifer Mathis, deputy legal director at the Bazelon Center for Mental Health Law. That’s because most states offer mental health benefits for Medicaid recipients that are more generous than the coverage offered by commercial insurance plans. But the new Medicaid benefits will be modeled on and measured against private insurance purchased by small businesses now.

Mathis says, however, that it will likely be difficult for states to maintain two parallel Medicaid programs, one for current beneficiaries and a second for the newly eligible. She hopes that most will choose to offer all Medicaid recipients the more robust benefits instead.

What else in the ACA may improve mental health treatment?

The ACA has several other provisions that will affect mental health coverage and treatment.

The Prevention and Public Health Fund created by the law, for example, includes $35 million to integrate primary care and mental health care, $10 million to train and recruit mental health professionals, and an additional $53 million in mental health screening, surveillance, and suicide prevention funds.

The ACA also requires that plans offer depression screening for adults without a copayment, co-insurance or a deductible.

While the ACA “provides enormous potential and opportunity to make sure than many millions more Americans obtain the services they need,” says Samuels, “that will only happen if the implementation of those reforms is effective.” Samuels worries that the rules from HHS will not be clear or strong enough to make the parity laws meaningful. He also worries about getting everyone who is eligible for coverage enrolled, particularly those with severe mental health disorders who be may homeless or living on the fringes of society.

In addition, governors in several Republican states have said that they will not expand Medicaid, leeway they were given by the Supreme Court’s health law decision in June. That could leave many Americans without any form of insurance coverage, including mental health benefits.

Access to treatment will likely also remain a serious stumbling block. States have cut $4.35 billion in public mental health spending from 2009  to 2012, a trend that is likely to continue over the next several years, according to the National Association of State Mental Health Program Directors. At the same time, the system has seen nearly a 10 percent increase in usage.

As many as 30 million people are expected to gain insurance coverage beginning in 2014. Of those, the U.S. Substance Abuse and Mental Health Services Administration estimates that 6 to 10 million will have untreated mental illnesses or addiction, adding additional demands to a system that is already overwhelmed. Patients may experience long wait times to see a psychiatrist, for example, and may require additional investments to expand the mental health workforce.

“I think there will be initial period where you may see folks with mental health coverage waiting longer than they’d like to get care,” says Joel Miller, senior director of policy and health care reform at the state mental health program directors group.