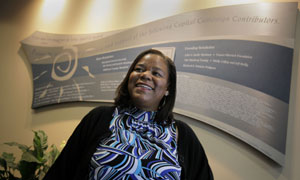 Many patients seeking mental health treatments, such as Denise Camp of Baltimore, have been forced to pick up a bigger share of the cost than they do with other medical bills. But a law that went into effect Jan. 1 prohibits such double standards. (Susan Biddle/Washington Post)

Denise Camp was resigned to the double standard that had long applied to her medical bills, forcing her to skimp on other expenses so she could pay for mental health treatment.

While visits to her internist for physical problems required a $20 co-pay, her weekly therapy sessions with a social worker cost $50 and trips to the psychiatrist who prescribed her medication were $75. A similar disparity applied to medicines: Drugs to treat the crippling depression that ended her engineering career cost her twice what she paid for an antibiotic.

But recently, Camp’s insurance coverage changed — for the better. The 50-year-old Baltimore resident, who now runs a drop-in center for recovering psychiatric patients, is paying the same charge for physical and mental health treatments: a co-pay of $10 per visit and $25 for each prescription.

“I have to use mental health benefits no matter what,” said Camp, who is insured through her employer. “This is going to make it more affordable for me.”

Camp is among an estimated 140 million Americans, most of them covered by group insurance plans provided by employers, who are the beneficiaries of a sweeping new federal law designed to guarantee parity in insurance coverage.

The law, which took effect for most plans Jan. 1, applies to groups of more than 50 employees and is designed to end what Health and Human Services Secretary Kathleen Sebelius called “needless and arbitrary limits on care.”

Higher deductibles, steeper co-pays and other restrictions are no longer allowed for mental health and substance abuse treatment.

The law does not apply to individual insurance policies, nor does it require group plans to provide mental health and substance abuse treatment, although most do.

Several weeks ago the Obama administration issued 154 pages of regulations governing implementation of the law, which was sponsored by the late Sen. Paul Wellstone, D-Minn., and former Sen. Pete V. Domenici, R-N.M. Passed with broad bipartisan support and signed into law by President George W. Bush in 2008, the measure is widely regarded as the last major piece of health legislation passed by Congress. The rules, which are subject to a comment period, are scheduled to take effect July 1.

Officials of key business and insurance industry groups said they were displeased that the regulations were “more expansive” than they believe lawmakers intended. Mental health advocates applauded the rules, which they said would help ensure that Americans battling schizophrenia, for example, receive the same level of care provided to those facing leukemia.

“This is a great boon for people like me who use these benefits,” said Peter Schroeder, 36, a computer scientist in Berkeley, Calif., who has received treatment for depression and alcohol abuse.

“These are serious conditions that get really expensive really quickly,” said Kirsten Beronio, a vice president of Mental Health America, an advocacy group based in Alexandria.

Some families, she noted, have gone bankrupt trying to pay for treatment. In extreme cases, parents of troubled children who need expensive, intensive services have been forced to temporarily relinquish custody to the state so that their children could qualify for services paid by Medicaid.

William C. Moyers, a vice president at Hazelden, a network of substance abuse treatment centers based in Minnesota, says he hopes the law will encourage those who need help to seek it. Hazelden, he said, spends $6 million annually providing aid to patients whose insurance covers only a portion of the cost or runs out after 30 days. Inpatient substance abuse programs can cost more than $20,000 per month.

“These are employed, middle-class people with private insurance,” Moyers said.


Federal officials estimate that complying with the law will increase premiums nationwide by four-tenths of 1 percent, or about $25.6 billion over 10 years. Employers are free to drop mental health and substance abuse coverage and are allowed to manage claims to determine if treatment is medically necessary, just as they do now for physical ailments, but the standards can no longer be more stringent. Plans are also allowed to exclude treatment for certain illnesses, such as eating disorders, as long as state law does not mandate coverage. There is also an escape hatch: Plans that can prove that their costs increased by more than 2 percent in the first year can file for an exemption.

“We are concerned that plans are going to try and find ways around it,” Beronio said. “And we’re concerned about the lack of awareness in general” about the new law. A recent study in the journal Psychiatric Services of a 10-year-old parity law in California found that nearly half of the Californians polled did not know about it.

Business groups say they are particularly unhappy that federal rules prohibit separate deductibles for medical and mental health treatment. But most said they did not think their members would drop coverage.

“I’d say we’re both wary and skeptical,” said E. Neil Trautwein, a vice president of the National Retail Federation. “We’re going to scrutinize anything” that results in additional cost.

Pamela Greenberg, chief executive officer of the Washington-based Association for Behavioral Health and Wellness, a group composed of eight companies that manage mental health benefits for 147 million Americans, said that prohibiting separate deductibles may have unintended consequences. A limited number of plans, she said, required a lower deductible for mental health and substance abuse in an effort to persuade more people who need treatment to seek it.

“You don’t need to do that with arthritis or cancer,” she said. “No one’s embarrassed to get help” for those conditions.

Greenberg said that it is unclear whether companies will decide to “cut back and cover fewer conditions. That’s not a place we want to go.”

Advocates rejected the view that the regulations were onerous. Employers and insurers “still have enormous tools and leverage to control inappropriate” or excessive treatment, said Andrew Sperling, director of federal legislative advocacy for the National Alliance on Mental Illness.

“Most people don’t go [for treatment] because this is fun or take psychiatric drugs for recreation,” said Irvin Muszynski, a lawyer at the American Psychiatric Association. Mental health and substance abuse expenditures, he said, account for a fraction of total health-care expenditures, “so what is everyone freaking out about?”

The regulations also require insurers to explain the criteria used to evaluate or deny a claim, which HHS said “must be based on the same level of scientific evidence used by the insurer for medical and surgical benefits.” Schroeder, president of the Mental Health Association of California, said that would be particularly helpful for consumers and their doctors.

“For many of us, medical necessity has been a big black box,” he said. Schroeder said his insurer once suggested he attend a free support group instead of therapy, and in the past granted permission for only three sessions at a time, requiring his therapist to “spend an hour on the phone convincing them that three more visits were medically necessary.”

Although it is not widespread, advocates say they have received scattered reports from around the country of employers dropping coverage rather than making changes to comply with the law.

Woodman’s Market, a grocery store chain that employs 2,800 people and is based in Janesville, Wis., is among them.

“If an employee went to a psychiatrist and ran up a million dollars, it would come out of our pockets,” he said.

When asked about an employee who incurred similar expenses after a cancer diagnosis, Woodman said in the Capital Times: “Cancer is different. That’s an identifiable physical situation.”

Woodman did not respond to several e-mails and telephone calls.

But to Camp, the view that psychiatric treatment is less deserving is shortsighted. “Mental health is just as important as physical health,” she said. “You don’t have one without the other.”