Michelle Obama’s “Let’s Move!” campaign for children now has a counterpart for the 50-plus set. The National Institute on Aging on Wednesday launched its “Go4Life” campaign, aimed at increasing physical activity among Baby Boomers and their parents. 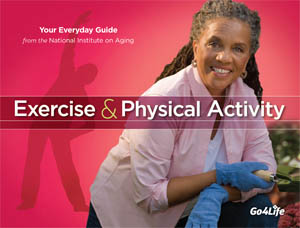 “Physical inactivity cuts across all age ranges, so we felt the need to do something especially for older adults,” said Chhanda Dutta, chief of NIA’s clinical geronotology branch. While Go4Life isn’t a Let’s Move! outgrowth, Dutta said, the campaigns do have much the same goal.

A 2007-2008 survey by the Centers for Disease Control and Prevention found that just 22.1 percent of people age 65 and over regularly participated in physical activity during their free time. The numbers drop to 11 percent among those 85 and over.

For more than a decade NIA has received calls from seniors and their family members asking how best to exercise. “Eventually, we realized that we needed to get the research we support and transform it into something practical for adults,” Dutta said. NIA first released an exercise guide in 1998, and it has now been revamped and made a key part of the Go4Life campaign.

Federally funded research has shown the health benefits of regular physical activity: One study found that implementing an exercise program among people age 60 and over with osteoarthritis reduced their risk of developing disability by more than 15 percent. Another found that moderate physical activity reduced the rate of developing type 2 diabetes by 71 percent, compared to a placebo medication, in a 60-and-over population.

Addressing disability, chronic disease and other sources of strain on the elderly could also alleviate health care costs. While there is no data available on the financial benefits of a national campaign like Go4Life, Dutta said that local initiatives have indeed shown decreases in health care costs. Federal officials are hopeful that Go4Life will see similar success.

NIA has spent about $3.1 million over the past two years in preparing the campaign – its website, exercise guide, DVD video and other elements – but it has not yet unveiled a budget for the campaign post-launch.  The agency expects contributions from its growing list of partners, including fellow agencies in the Department of Health and Human Services, as well as non-profits and health insurers.