MIAMI—Benito Garcia is 56, a sturdy auto mechanic who lives in the working-class enclave of Hialeah. He came to the United States from Cuba in 2006, became a U.S. citizen and will vote for the first time next week. When asked if he prefers President Barack Obama or former Massachusetts Gov. Mitt Romney, he replies “I haven’t decided” with a sardonic grin that tells the questioner that it’s none of his business.

Garcia has brought his niece and her infant child for a checkup at the Peñalver Clinic, a cool, airy stucco building in Little Havana where the underserved residents of Florida’s Miami-Dade County can receive primary health care at nominal fees. The niece and child are covered by Medicaid, but Garcia himself has no medical insurance, which does not particularly bother him. His boss doesn’t offer it, and, anyway, he says with a shrug, “there’s nothing wrong with me.”

According to the U.S. Census Bureau, there were an estimated 771,874 uninsured people living in Miami-Dade in 2011, which was 30.5 percent of the county’s total population and the fifth highest percentage of medically uninsured of any county in the country. 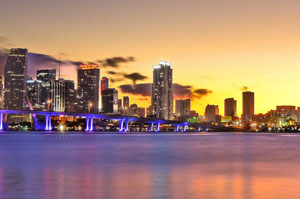 Miami-Dade is Florida’s biggest county, and Florida, with 29 electoral votes, is the largest of the critical swing states in the Nov. 6 general election. Health care routinely polls nationally as one of the nation’s top two or three concerns, and in Florida in August, a Quinnipiac/CBS/New York Times poll  of likely voters put it in second place, four points behind the economy, and well ahead of Medicare and the budget deficit.

With this high profile, the availability of health insurance should loom as a pivotal issue for Miami-Dade’s uninsured voters, especially with the stark choice facing them: the goal of Obama’s Affordable Care Act is health insurance for everyone; Romney has promised to repeal the law.

Yet most uninsured patients interviewed in mid-October visits to Peñalver and the Helen B. Bentley Health Center in Coconut Grove, did not routinely link their concerns about health care to their voting intentions. Instead, preferences tracked much more closely with how the candidates’ positions were expected to help the poor generally, or with their stances on Cuba (Miami’s anti-Castro exiles have been a reliable Republican constituency for most of the last 50 years).

“I don’t like Obama’s plan,” said Antero Blanco, 61, a Cuban-born U.S. citizen visiting Peñalver Clinic to seek help for his nephew, a construction worker with stomach cancer and no insurance. “It only benefits some people.”

Blanco did not describe his nephew’s immigration status. The health care law does not apply to undocumented aliens, but with rare exceptions virtually any Cuban immigrant can qualify for permanent residence—and coverage under the new law—after residing in the United States for a year. The nephew is 41 and needs $3,500 for tests at Jackson Memorial, Miami’s immense public hospital. “He hasn’t got the money,” Blanco said.

Blanco has employer-based health insurance, but his nephew’s plight has no influence on his own views. “I’m a Republican,” he said. “Always have been.”

For Miami’s uninsured, the health care rhetoric of battleground-state politics doesn’t appear to resonate. Instead, patients spend their time trying to gain access to medications and physicians and finding the money to pay for them.

Linda Quick, president of the South Florida Hospital & Healthcare Association, noted that while neighborhood hospitals cannot refuse emergency room treatment to the uninsured, patients get charged for follow-up procedures or specialty treatments. “If they don’t have the money, Jackson has to take them,” Quick said. “But that says nothing about when they take them. Historically they have had to wait weeks or months for an appointment.”

Three years ago, Yadiel Molina, then 25, was assaulted at a gas station and had his leg broken. He was treated at Jackson, but has never been able to get enough money to have the steel pins taken out of his leg. “He’s at the emergency room now, trying to get an appointment,” said his mother, Elizabeth Lopez, 52. Molina is a U.S. citizen and works construction when he can, but his leg periodically swells up, all but crippling him. He has never had medical insurance.

The Peñalver and Bentley centers were created to provide preventive and primary medical care to Miami’s underserved populations and neighborhoods. Bentley is a Federally Qualified Health Center, supervised by the federal Health Resources and Services Administration; it receives some federal funding. Peñalver follows the federal guidelines, but is not an FQHC and gets no federal funding.

“The general and overwhelming explanation” why Miami-Dade County has such a large number of uninsured, said Steven Marcus, president and CEO of the Health Foundation of South Florida, a nonprofit, grant-making public charity, is that a staggering 52 percent of the population is foreign-born, “both legal and undocumented.” The county has a large service economy “and we have a lot of migrant labor, seasonal labor and construction workers,” jobs that often don’t come with insurance. In this environment, illness can quickly become a catastrophe.

“My mother is a citizen and had never been sick until a year ago,” said Carmen Cabrera, who cleans houses in Miami. Her mother, Ofelia Romero, 64, has lost so much strength and weight from a mysterious undiagnosed disease that she can only navigate the hallways of the Bentley Health Center with the aid of a walker. Cabrera, 45, and her brother, a Guatemala-born construction worker, managed to scrape together $700 for an MRI and other tests, but her mother needs a specialist, “and we can’t pay for it.” Cabrera is at Bentley hoping to find help.

Boris Alvarez, executive director of Peñalver, and Caleb Davis, his counterpart at the Bentley Center, agree that despite treating some exotic ailments, the bulk of their business is the treatment of adult diabetes and hypertension, expectant mothers and children. “It has always been that way,” said Davis, in charge at Bentley since 1980.

“I ended up running out of insulin, and borrowed it from my fiancée’s mother,” said Miami native Joseph Exantus, 33, an unemployed and uninsured cook and plumber who has diabetes and is recovering from back surgery. “And then I ran out again and went to Baptist [Hospital] emergency. I had to pay $50 and the doctor ordered blood work, but that cost almost $300, and I didn’t have it.”

Exantus, who is homeless, acknowledges that health care is “very important” to him, but does not connect his concern directly to his support for Obama. Instead, he said, “I want to vote for him again just because he deserves a second chance, and my mother always raised me to give people a second chance.”

Alvarez says Penalver treats around 11,000 patients each year, and Bentley, according to Davis, treats 16,500 patients. Patients average about three visits annually. And while most appear to use the clinics because they are the only prompt medical care available to them, some prefer it. Both health centers are sunny and immaculately clean; same-day appointments are easy to get; and wait times seem reasonable.

“Personally, it’s about the comfort level,” said Bentley patient Natalie Santiyani, 21, a full-time scholarship student at Florida International University. “They have health insurance at school, but I’ve been coming here for a long time and paying out-of-pocket.” She plans to vote for Obama because “he’s better for the middle class and the lower class,” she said, but health care is only one piece of her agenda. Santiyani’s mother and grandmother have had a difficult life ever since they emigrated from Honduras 30 years ago, and, Santiani said, “I want to help them anyway I can.”