This week, I answered questions from readers about the obligation of ex-spouses to provide children with health insurance once they’re adults, Medicare coverage of home infusion therapy and how to calculate eligibility for subsidies on the state marketplaces.

A. No, he’s not obligated to keep them on his health plan. Under the health law, insurers must offer to cover young adults up to age 26, but parents aren’t obligated to provide it, says Timothy Jost, a law professor at Washington and Lee University and an expert on the health law.

Further, the requirement to offer coverage isn’t related to the age of majority, which is defined by individual states and is generally between 18 and 21, says Randy Kessler, an Atlanta divorce lawyer and past chair of the American Bar Association’s family law section.

The health insurance coverage arrangement that you describe is pretty typical, says Kessler. You could go back to court and try to get your child-support payments increased to cover the cost of providing health insurance for the kids, but “it would be unusual for the courts to be helpful,” says Kessler. Absent some significant change in your or your ex-husband’s finances, or unforeseen and costly medical expenses for your children, in general “you can’t have another bite at the apple.”

With no legal requirement to compel either of you to cover your kids, it’s something the two of you will just have to work out, says Kessler. In addition to covering your children on your own or your ex’s plan, it’s also worth exploring whether they might qualify for subsidized coverage on the state marketplaces or for Medicaid, if your state has expanded coverage to childless adults. If they’re in college, student health coverage is worth investigating as well.

Q. My husband was recently in the hospital for a pacemaker implant. He was set to come home but developed a staph infection and a blood clot. He now has to receive an antibiotic infusion for six to eight weeks. Medicare would not pay for home infusion, so he has to travel 30 minutes to the infusion center every day. Is there anything we can do? 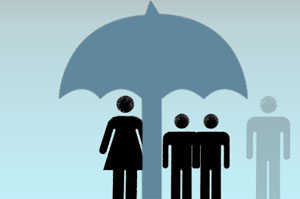 A. Probably not. Infusion therapy means administering drugs intravenously, and although it can be done in settings such as outpatient centers, hospitals or nursing homes, many patients would prefer to receive their drugs at home. But even though most private health plans and some Medicare Advantage managed care plans pay for home infusion, the traditional Medicare fee-for-service program generally does not. There’s an exception for roughly 30 drugs that must be administered using an IV infusion pump. These are covered under Medicare Part B’s durable medical equipment benefit. But Medicare generally won’t pick up the tab to intravenously administer other drugs such as antibiotics at home, even though the drugs themselves may be covered under Part D, Medicare’s prescription drug benefit.

“It’s a basic flaw,” says Russ Bodoff, president and CEO of the National Home Infusion Association, a trade group for home infusion providers. “Every site of care is covered except the home.” Bodoff’s organization is working on legislation that would expand Medicare’s coverage of home infusion therapy.

For now, though, if you want your husband to receive his antibiotic IV therapy at home, you may have to pay for the cost of the equipment, supplies and any nursing services on your own.

Q. My wife will be exploring insurance options on the federal exchange in November. In regard to subsidies, we file jointly and most of our income comes from dividends derived from jointly owned assets. I am assuming that her share of that income would be precisely half of the annual total income (in addition to her earned income from part-time work.) Is this a fair assumption?

A. No, it’s not. Premium tax credits are available on the health insurance marketplace to people with incomes between 100 and 400 percent of the federal poverty level (in November that will be $15,730 to $62,920 for a couple). Eligibility is based on household income, not her income alone. If the modified adjusted gross income (MAGI) for the two of you falls within those limits, she could be eligible for a subsidy. Under the health law, MAGI would include your wife’s wages and your dividend income, as well as tax-exempt Social Security benefits, tax-exempt interest and tax-exempt foreign income, says Mark Luscombe, a federal tax analyst at Wolters Kluwer, CCH, a tax and accounting information publisher.

Clarification: This story was updated to revise the name of Wolters Kluwer, CCH. An earlier version identified it as Wolters Kluwers’ CCH.

Must A Divorced Dad Cover Adult Kids; Will Medicare Pay For Infusion Therapy