If all goes according to plan, next year many Arkansas Medicaid beneficiaries will be required to make monthly contributions to so-called Health Independence Accounts. Those that don’t may have to pay more of the cost of their medical services, and in some cases may be refused services. 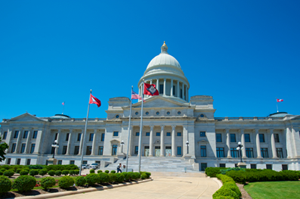 Supporters say it will help nudge beneficiaries toward becoming more cost-conscious health care consumers. Patient advocates are skeptical, pointing to studies showing that such financial “skin-in-the-game” requirements discourage low-income people from getting care that they need.

Michigan and Indiana have already implemented health savings accounts for their Medicaid programs, modeled after the accounts that are increasingly popular in the private market. The funds, which may be supplemented by the state, can be used to pay for services subject to the plan deductible, for example, or to cover the cost of other medical services.

The program particulars in each state differ. But both states – and the Arkansas proposal — require beneficiaries to make monthly contributions into the accounts in order to reap certain benefits, such as avoiding typical cost sharing for medical services. Funds in the accounts may roll over from one year to the next, and participants may be able to use them to cover their medical costs if they leave the Medicaid program.

“We believe in consumerism,” says John Selig, director of the Arkansas Department of Human Services. By requiring Medicaid beneficiaries to make a monthly contribution to a Health Independence Account, “we think they’ll use care more appropriately and get a sense of how insurance works.”

Jules Taylor is delighted to have health insurance for the first time in years through Arkansas’ Medicaid program. The acting teacher and performer, who makes between $16,000 and $20,000 annually, couldn’t afford private coverage before. This year she qualified for Arkansas’ “private option,” which covers people who are eligible for Medicaid under the expanded provisions set out in the federal health law. But Arkansas did not offer most of these people a typical Medicaid plan. Instead, they enroll in coverage on the state insurance marketplace with the federal government picking up the tab.

The 49-year-old Fayetteville resident went to an urgent care center recently to have a skin rash looked at and was thrilled not to have to pay a penny for the visit.

She’s less sanguine about the prospect of making a monthly contribution to a health savings account.

“I’ve always wanted to pay my own way,” she says. “But I can see certain moments in time where I couldn’t even pay $10.”

Under the health law, states can expand Medicaid coverage to adults with incomes up to 138 percent of the federal poverty level (currently $16,105 for an individual). So far, about half have done so. But some conservatives have objected to the expansion of a government entitlement program, preferring a private market approach that they say encourages personal responsibility.

Arkansas and Iowa proposed and received approval from the federal Department of Health and Human Services for premium assistance programs that use federal funds to enroll the new Medicaid-eligible beneficiaries in marketplace plans.

For 2015, Arkansas is proposing to expand its experiment by introducing the Health Independence Accounts. Nearly all beneficiaries earning between 50 and 138 percent of the poverty level ($5,835 to $16105 for an individual) would have to participate through monthly contributions of between $5 and $25, depending on their income, or face cost-sharing requirements capped at 5 percent of income by Medicaid rules. In addition, Medicaid enrollees with incomes over the poverty level could be refused services if they don’t make their monthly contribution and don’t make a copayment. (This year, those with incomes between 100 and 138 percent of poverty already have co-pays.)

Under the new program, any of the private option enrollees would be able to avoid all cost sharing charges next year by making monthly contributions to their HIA.

Each month that a beneficiary makes a payment to his or her account, the state will contribute $15. Unused amounts will roll over from one year to the next up to a maximum of $200, which can be used by the beneficiary for health care costs if he or she leaves Medicaid for private coverage.

A public comment period about the proposal begins Aug. 1, and state officials hope to begin the expanded program by Feb. 1, 2015.

Advocates say they’re pleased that 175,000 Arkansans have gained coverage under the Medicaid expansion. But the proposal for next year gives them pause.

“There are concerns with adding cost sharing to those below the poverty level,” says Anna Strong, health care policy director at Arkansas Advocates for Children and Families.

Those concerns are well founded, say experts. “This is something that researchers have looked at a lot,” says MaryBeth Musumeci, associate director at the Kaiser Commission on Medicaid and the Uninsured. “Overarchingly, premiums and cost sharing have been shown to discourage or impede folks from getting needed care.” (KHN is an editorially independent program of the foundation.)

Some experts note that at least 40 states already charge premiums or cost sharing for at least some beneficiaries. Beneficiaries have skin in the game already, they say, and they question the value of these special accounts that add a whole new layer of complexity for people who may not ever have had insurance before.

“We’re creating these incredibly complicated administrative structures, and I don’t think people will understand them,” says Judith Solomon, vice president for health policy at the Center on Budget and Policy Priorities.