The uninsured rate for kids under age 18 hasn’t budged under the health law, according to a new study, even though they’re subject to the law’s requirement to have insurance just as their parents and older siblings are. Many of those children are likely eligible for coverage under Medicaid or the Children’s Health Insurance Program. 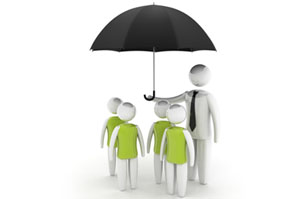 The Urban Institute’s health reform monitoring survey analyzed data on approximately 2,500 children, comparing the uninsured rate in June 2014 with the previous year, before the health insurance marketplaces opened and the individual mandate took effect. It found that rates remained statistically unchanged at just over 7 percent for both time periods.

Part of the explanation is that even before the health law passed, the uninsured rate for children was already quite low, says Genevieve Kenney, a senior fellow at the Urban Institute and the lead author of the study. Rates had been declining for years, pushed lower by expansions in coverage for children under state Medicaid and CHIP.

In addition, the study doesn’t reflect state variations. The rates for kids may well be declining in states that expanded Medicaid coverage to adults with incomes up to 138 percent of the federal poverty level (about $16,000 for an individual), as parents sign their kids up at the same time that they enroll in coverage themselves. But four states with large concentrations of uninsured children – Florida, Georgia, North Carolina and Texas – are not expanding their Medicaid programs.

More than 80 percent of the uninsured children in the survey are likely eligible for Medicaid or CHIP because their families have incomes at or below 250 percent of the poverty level ($49,475 for a family of three). The median income threshold for Medicaid/CHIP across all states is 255 percent of poverty, Kenney says.

Parents of uninsured children should keep in mind that they can sign their kids up for Medicaid/CHIP at any time through healthcare.gov. There’s no open enrollment period.

In addition, income thresholds for the program are higher than many people realize, says Kenney. In 19 states, children in families with incomes over 300 percent of the federal poverty level could qualify for Medicaid or CHIP ($59,370 for a family of three), according to the study.