Medical tests can reveal critical information about a person’s health, but only if the results are communicated to clinicians and patients. Sometimes, the ball gets dropped somewhere between the lab or the radiology department and the clinician who ordered the test and the patient.

In Peggy Kidwell’s case, a mix-up over doctors’ names led to a year-long delay in a breast cancer diagnosis.

After her annual gynecological exam and mammogram several years ago at a medical center near her Virginia Beach home, she got a letter from her doctor saying the results of her Pap test were normal. She assumed that she would hear from her doctor if anything untoward showed up on her mammogram exam and thought no more about it.

A year later, when Kidwell went back for her annual exam, her doctor, finding no mammogram results in her chart, asked why she hadn’t gotten a screening exam the previous year. When Kidwell said she had, the doctor investigated. Five hours later, the doctor called Kidwell to tell her she had found the results and it looked as though she had breast cancer. 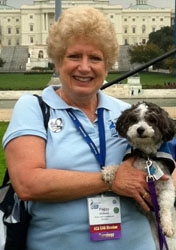 Kidwell with her dog, a medical service animal for her (Photo provided by Kidwell).

The test results had been sent to an orthopedic surgeon at the medical center who had the same last name as Kidwell’s gynecologist. The folder had been sitting on his desk for a year, according to her gynecologist.

By that time her cancer had spread to her chest wall. Kidwell had a lumpectomy, chemotherapy and radiation. The following year, the cancer came back and Kidwell had a mastectomy. She filed a lawsuit and eventually settled the case. (A confidentiality agreement prohibits her from discussing specifics.) No one, she says, ever said that an earlier diagnosis might have made a difference in the course of her disease, but she believes it may have.

Kidwell, 59, who now lives in Bethesda, blames the medical system for the mix-up, but also herself. “To this day, I don’t let myself off the hook for not picking up the phone,” she says.

There are also financial consequences for providers when tests aren’t promptly reported: A recent study in the Journal of the American College of Radiology found that annual medical malpractice payouts for communication breakdowns, including failing to share test results, more than quadrupled nationally between 1991 and 2010, to $91 million. For patients, the missteps and mistakes can be life-altering.

Patient follow-up could make a difference in many instances. The study examined medical malpractice claims from 425 hospitals and 52,000 providers.

Of the 306 cases in which test results were specifically cited as a factor in a malpractice case, the most common problem — it occurred almost half the time — was that the patient didn’t receive the test results, cited in 143 cases. The second-most-common problem was that the clinician didn’t receive the results, cited in 110 cases. Other problems included delays and slow turnaround in reporting findings and test results that were filed before the clinician reviewed them.

The study examined a different database as well, the National Practitioner Data Bank, to arrive at a dollar value for malpractice claims payouts related to communications problems, examining categories that would include getting test result information to practitioners and patients alike, for the period from 1991 to 2010. That analysis showed that payouts increased from $22 million to $91 million during that time, a more than four-fold increase.

Patient advocates and policy experts say the push for better coordination of patient care, including the adoption of electronic medical records, should help improve the delivery of test results to patients from doctors and to doctors from those who perform the tests.

“Health reform and payment reform are moving us toward integrating care to a degree that we don’t do right now,” says Diane Pinakiewicz, president of the National Patient Safety Foundation, a Boston-based consumer group. “The one constant is the patient. The best chance is for the patient to be part of the process.”

Patient involvement is important, but the burden of following up on test results shouldn’t fall on their shoulders, experts agree.

But doctors need a helping hand. In a given week, a primary-care doctor might need to review 360 chemistry test results, 460 hematology results, 12 pathology reports and 40 radiology reports, according to researchers at Partners HealthCare system in Boston. More than half of physicians surveyed some years ago said they weren’t satisfied with the way they handled test results, which typically took more than an hour each day.

Now many practices affiliated with Partners use a multilayered system that helps them manage test results. The Web-based system lets them log in and see all the tests they’ve ordered and the results that have come in, with those that are problematic listed first. If a test result requires urgent attention, the system generates an e-mail alerting doctors; if they ignore this warning and subsequent messages, the system alerts the practice manager, who contacts the physician directly.

The system also generates letters that notify patients of their test results and has a tickler function that can alert doctors when patients haven’t had follow-up tests as ordered.

Even so, “nothing is foolproof,” says Eric Poon, director of clinical informatics at Brigham and Women’s Hospital, part of the Partners system.

“No news is not good news,” he says. “If a patient gets a test done and doesn’t get a result, he should follow up.”

Correction: This story has been corrected to note that Peggy Kidwell lives in Bethesda, not Silver Spring.