A growing number of expectant mothers are among the migrants pouring in daily from Honduras, Guatemala, El Salvador — even Haiti — to more than 30 already overflowing shelters in Tijuana, Mexico.

“More women are arriving pregnant or with babies,” said pastor Gustavo Banda of the Embajadores de Jesús (Ambassadors of Jesus) church, which operates a shelter in Cañón del Alacrán (Scorpion’s Canyon) on the outskirts of Tijuana. “We have a lot of Haitian women and some Central American.”

Some women also get pregnant while they wait.

These pregnant women are stuck here because the Trump administration’s “Remain in Mexico” program requires some U.S.-bound asylum applicants to register at ports of entry and then return to Mexican border cities to wait as their claims are processed.

It’s a period of great anxiety, if only because many want their children born in the United States. The Constitution guarantees that every child born on American soil automatically becomes a U.S. citizen.

President Donald Trump has repeatedly condemned so-called anchor babies, arguing that many migrants use these children to establish a foothold to help them gain legal status.

Mexico offers birthright citizenship, but it’s not exactly the same as the American version.

U.S. Customs and Border Protection keeps no record of how many pregnant women have applied for asylum, but Mexican shelters report the number is rising.

As the days, weeks and months pass while these women wait, obtaining prenatal care is difficult. They rely primarily on volunteer medical workers for their checkups, sonograms, ultrasounds and prenatal vitamins. Inconsistent prenatal care leaves them vulnerable to miscarriage and other complications.

Some shelters schedule visits from doctors and nurses, while others coordinate care with local clinics.

But the biggest health challenge these women face is finding a place to deliver their babies in Mexico if they’re still waiting for their asylum cases to be heard.

To give birth in a Mexican hospital, they must sign up for the Seguro Popular health insurance program — similar to Medicaid in the U.S. But to qualify for an in-hospital birth, they must have obtained an ultrasound, which has been a difficult requirement for most of these women to meet, said Phil Cañete, clinic coordinator for the nonprofit Refugee Health Alliance. 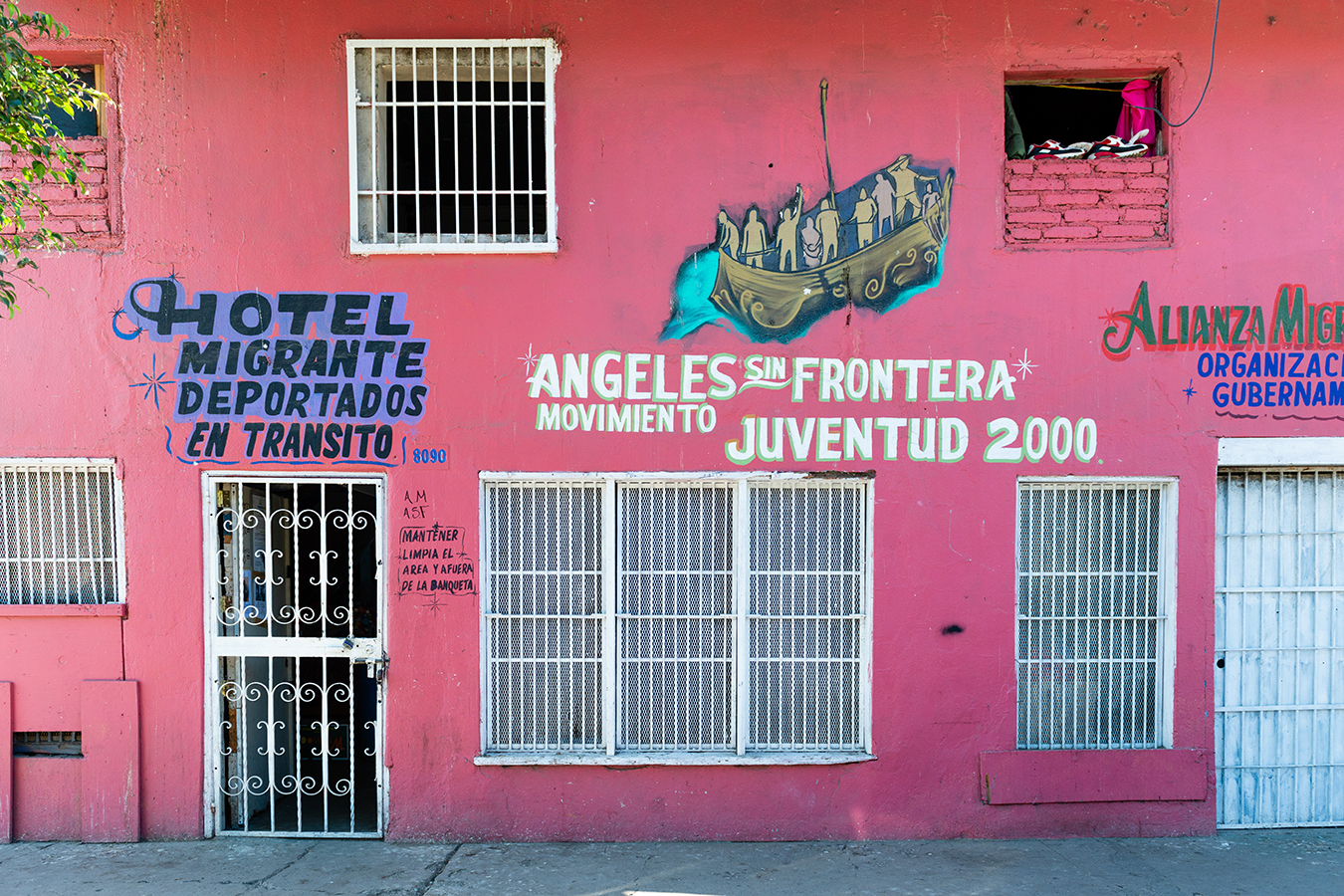 The Hotel Migrante Ángeles Sin Fronteras in Tijuana, Mexico, serves as a temporary home for about 30 of the migrants who have arrived in large caravans from Central America. The shelter primarily houses families with children seeking asylum in the United States. (Heidi de Marco/KHN) 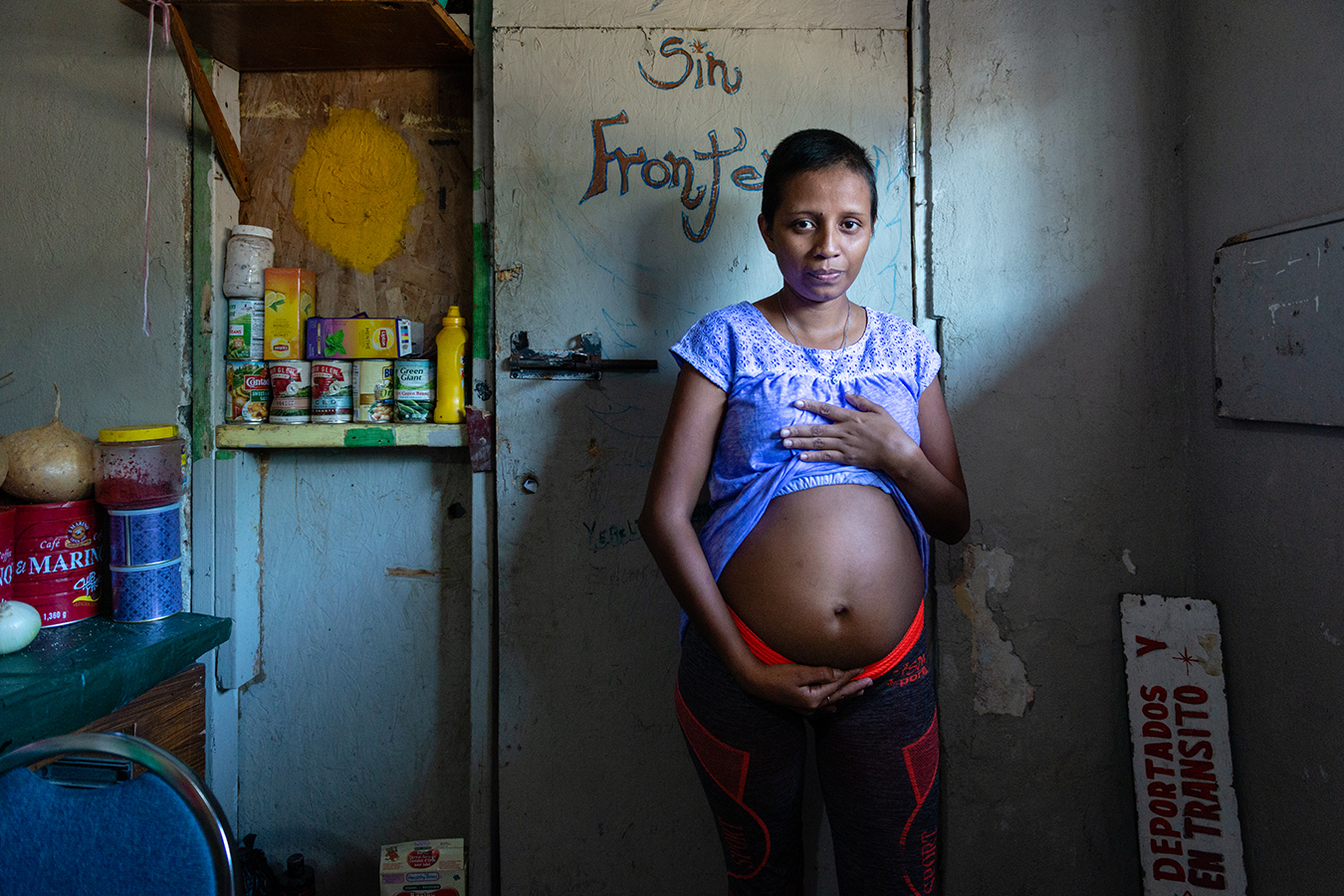 Grevy Marisela Jimenez Martinez, 28, a migrant from Honduras, has been living in the shelter for the past four months. She is almost five months pregnant and is expecting twins. “I hope they are born in the United States. I want a better future for them,” she says. (Heidi de Marco/KHN) 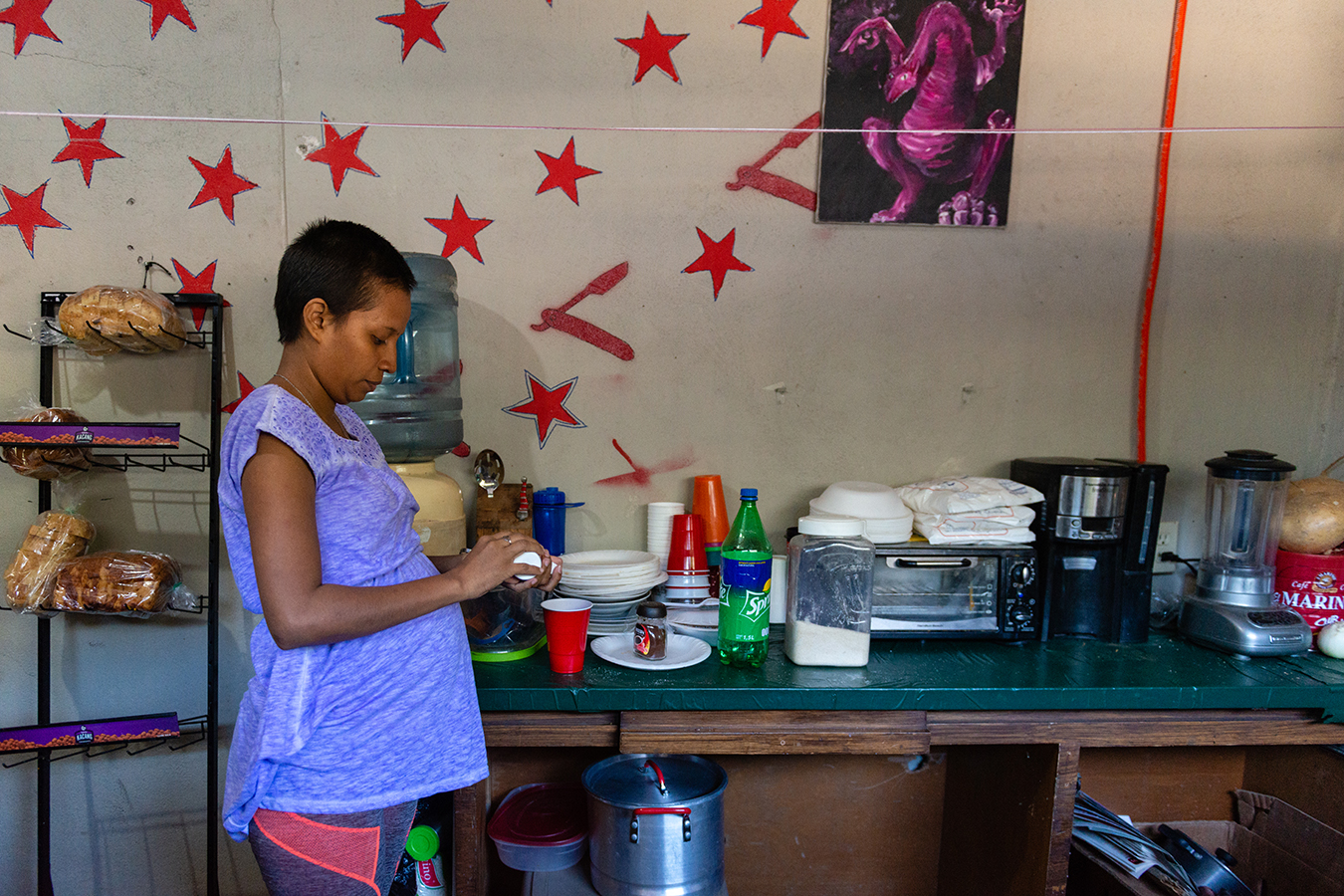 Jimenez Martinez and her husband fled Honduras because, she says, they couldn’t find steady work and faced constant harassment from local gangs in their hometown of Tegucigalpa. Jimenez Martinez waited for three weeks in a line at the U.S. border with what felt like “thousands of people” in order to claim asylum, she says. Now she spends her days waiting for her number to be called so she can have her case heard by an American immigration court. (Heidi de Marco/KHN) 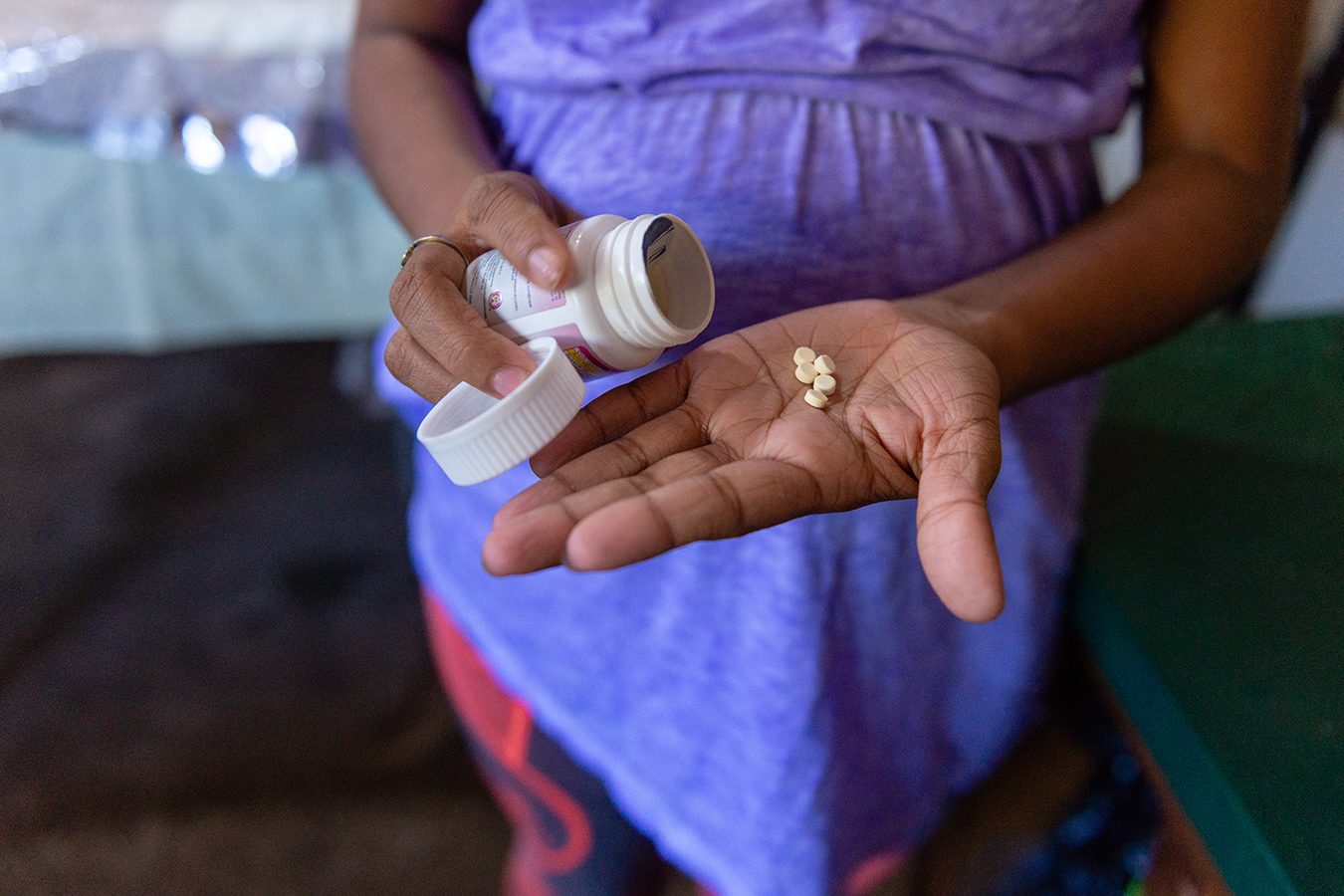 The shelter helped Jimenez Martinez get an ultrasound and prenatal vitamins from a local clinic. She can’t afford any other care. Learning she was pregnant encouraged her to make the month-long trek from Honduras to Mexico because she wanted a better life for her children, she says. “We traveled with a caravan of about 1,300 people. We either walked or rode the train,” she says. If she and her husband are not granted asylum, they plan to stay in Tijuana and raise their children. (Heidi de Marco/KHN) 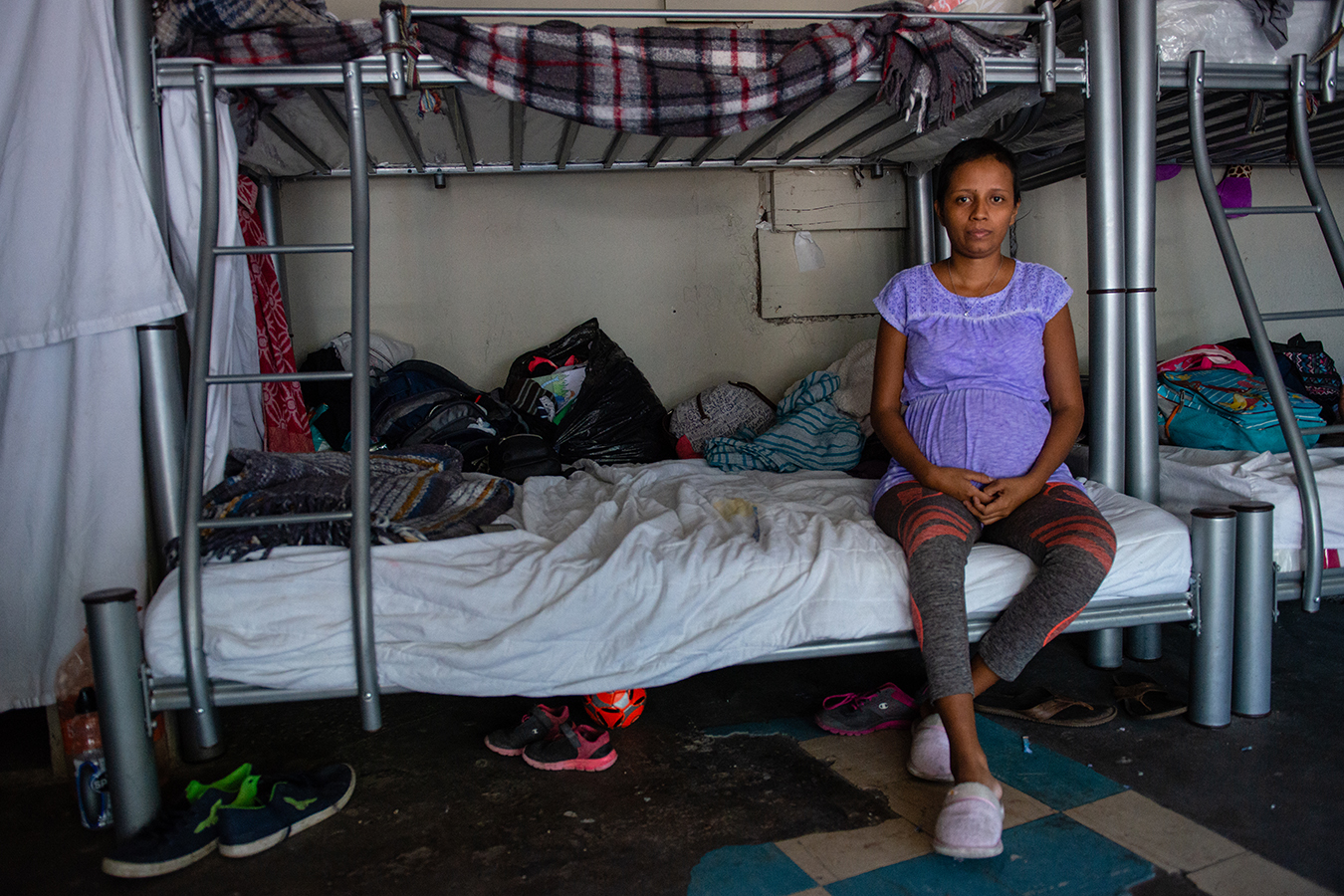 Jimenez Martinez shares the lower level of a bunk bed with her husband in the shelter. “It’s hard to sleep because the babies move a lot and keep me up all night,” she says. Food isn’t guaranteed at the shelter, so her husband cuts hair on the side to buy a little extra. “I get cravings, but we don’t have money for proper nutrition,” she says. (Heidi de Marco/KHN) 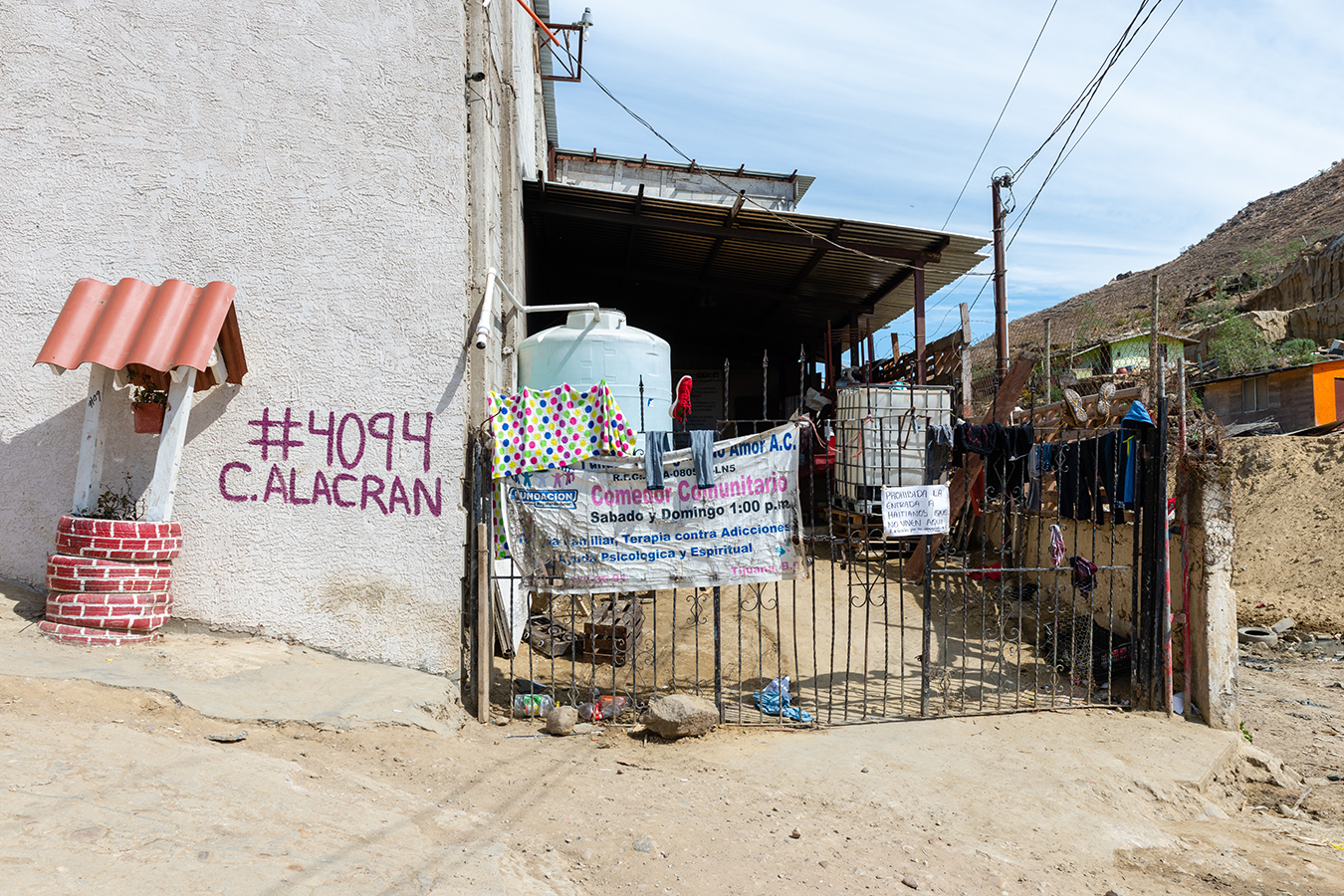 The Camino de Salvación shelter, run by the church Embajadores de Jesús (Ambassadors of Jesus), is located in Cañón del Alacrán (Scorpion’s Canyon), on the outskirts of Tijuana. The shelter, which houses about 75 migrants, started accepting refugees two years ago in response to a sharp increase in the number of Haitian asylum-seekers but has since opened its doors to Central American migrants. (Heidi de Marco/KHN) 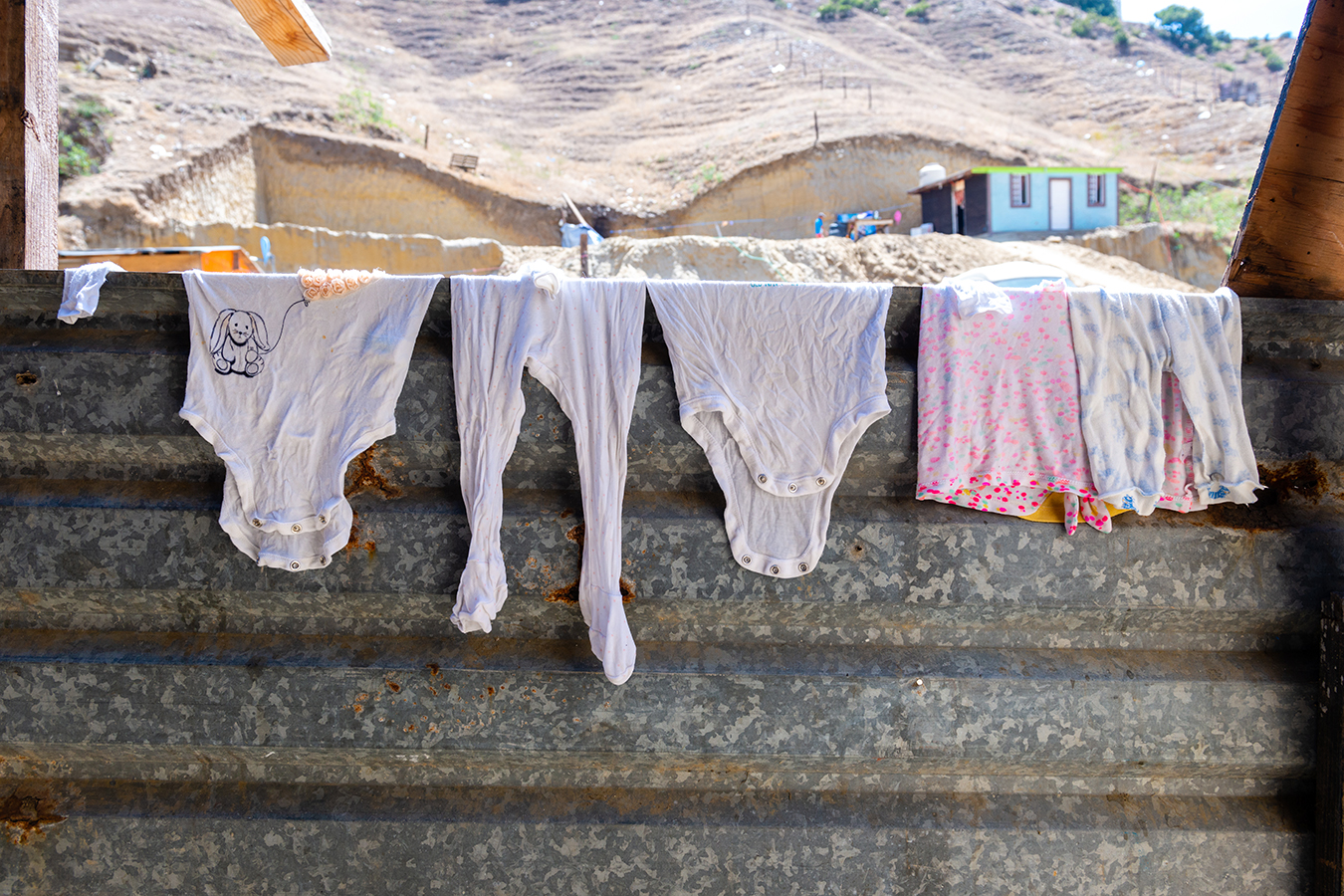 Baby clothes hang out to dry at the Camino de Salvación shelter, which is home to families with children. The shelter is located about 20 minutes from the border in Tijuana’s El Pipila neighborhood, at the end of long dirt road. There is limited access to water and electricity. Two bathrooms, each with a few stalls, are shared by all the migrants. (Heidi de Marco/KHN) 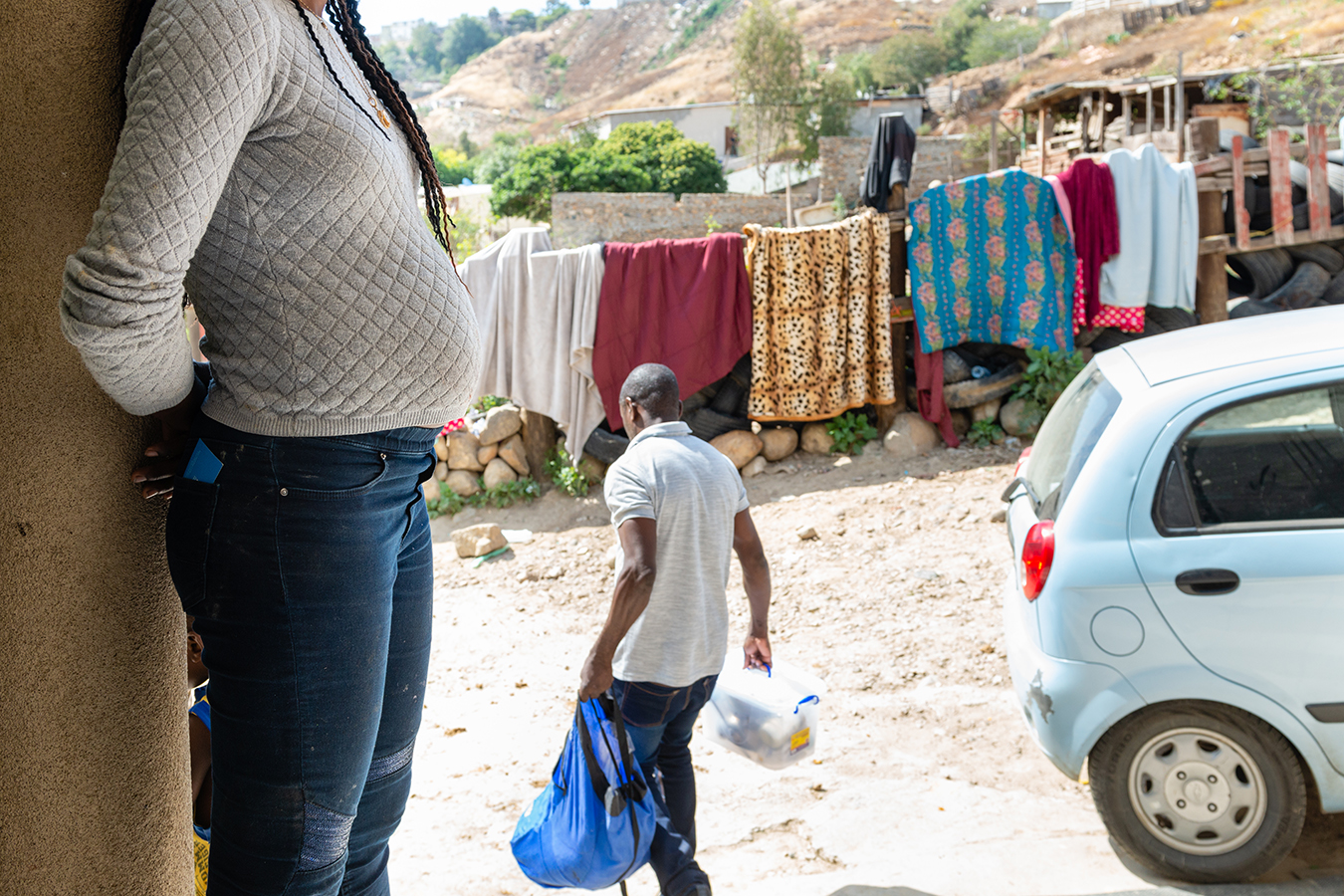 Daniela Pierre waits as her husband takes their laundry to be washed. Pierre fled Haiti four years ago after the economy collapsed and ended up in Venezuela. But the political turmoil there forced her to keep moving, she says, and she spent four months traveling by bus and foot to the U.S. border. She has been living in the Tijuana shelter for three months while the U.S. government considers her asylum application. (Heidi de Marco/KHN) 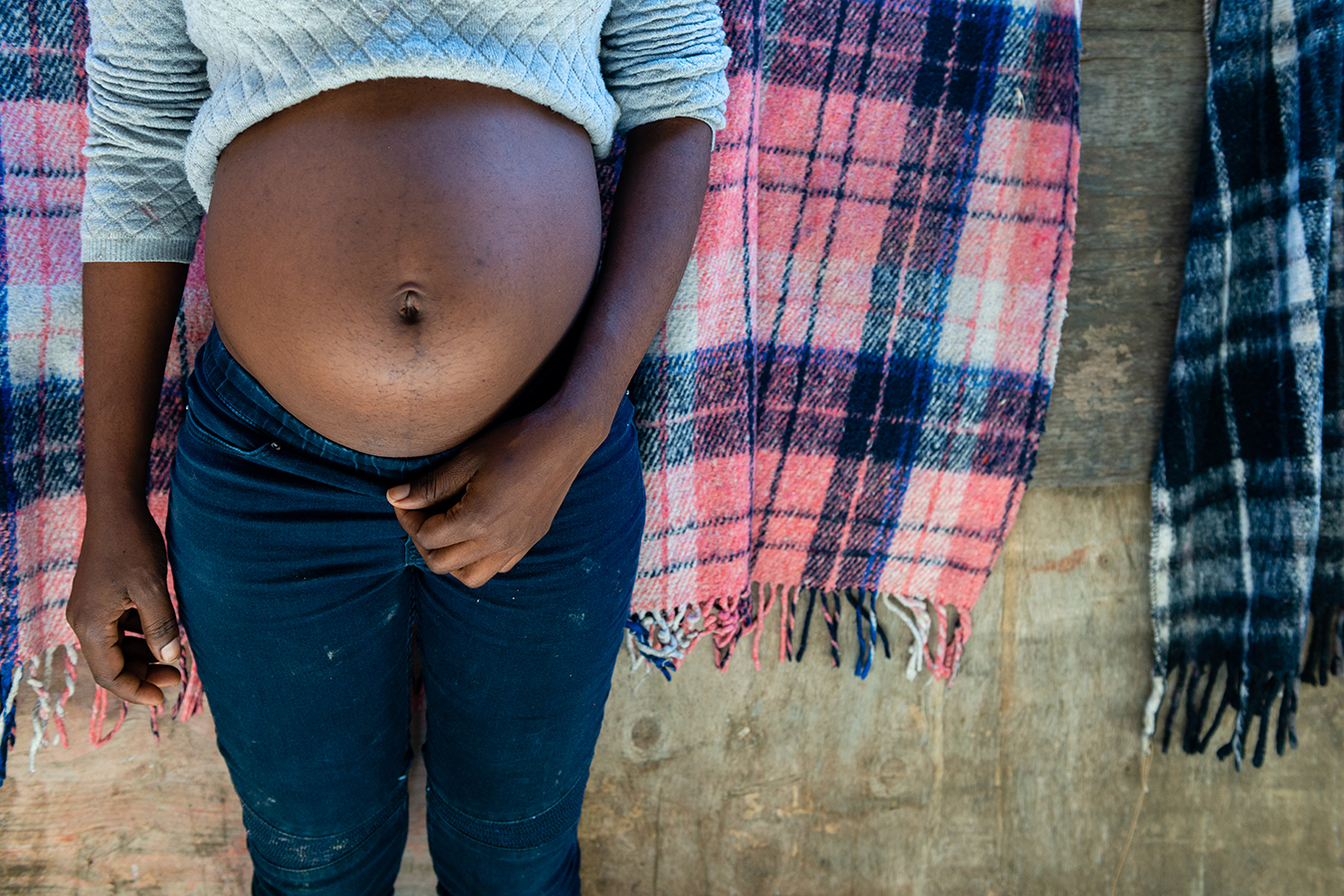 Pierre, 26, is four months pregnant with a boy. “As a pregnant woman, you never really feel good,” she says. Pierre has been examined by volunteer doctors who visit the shelter and was prescribed medicine to boost her appetite. Unlike Jimenez Martinez, she doesn’t care whether her child is born in the U.S. or Mexico. “It doesn’t matter where he is born, as long as he’s healthy,” Pierre says. (Heidi de Marco/KHN) 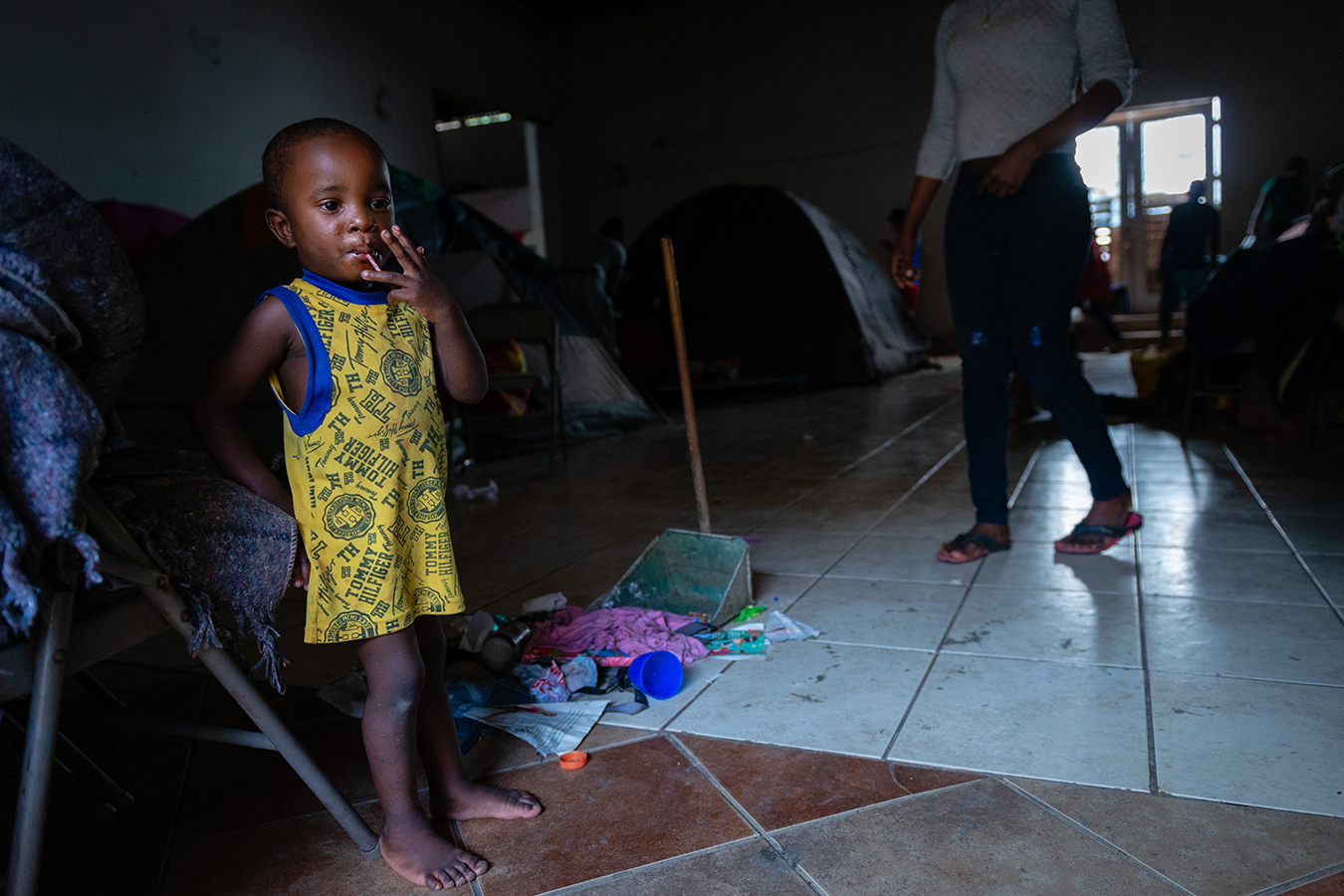 Pierre watches as her 2-year-old son, Adrian, plays. “When you have kids, you have to look for a better future for them,” she says. Pierre shares one of the tents in the background with her husband and two children. Sleeping on a hard floor with a few blankets is uncomfortable for her. “When you’re an immigrant and you’re not working, it makes it hard to buy things that you need,” she says. She expects to wait at the shelter for at least two more months before she can appear before a U.S. immigration judge. “Our number is 2,716.” (Heidi de Marco/KHN)